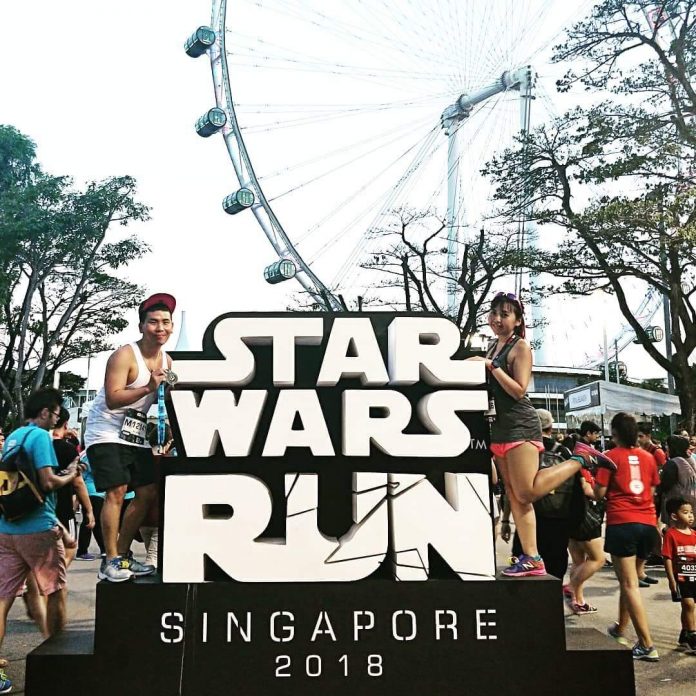 I really can’t remember did I ever watched any Star Wars movies before, maybe I did during my primary school days which was like millions of years ago but I don’t have any recollection of it at all. But I really love the atmosphere of theme runs and fun runs, the atmosphere is more fun and happy than those normal runs, that’s why registered for the run.

When I went to collect the race pack at City Square Mall, there’s a queue of at least 30 people in front but the queue was fast moving and took me less than 10 minutes to collect it. While I was in the queue, a volunteer handed me a number tag, its only when its my turn then I knew that the tag is for a free limited edition Star Wars cushion 😍 It’s for the first 500 people who collected the race pack for each day and lucky me I was number 492 on the last day of collection. What’s more is that the race entry pack comes with a Star Wars picnic mat! It’s pretty handy and probably for the movie screening after the run but I’m not a picnic person and think it would be months or years later that I’ll have the chance to use it. I really prefer to get a singlet than T-shirt though. 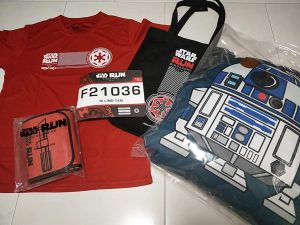 Fun runs registration fees are usually much more expensive than normal running events but for the race I think it’s worth it, I literally feel that the super cold coconut drink is worth all that $80 at the moment I got that drink after I finished the run 😂 (I felt as if I ran in a hot dessert and the 10km category were flag off at 5pm when the sun still hanging so high up, luckily I have my shades with me if not I would’ve ran with my eyes close), and everything else I get for the race pack and finisher entitlement is a bonus.

On event day, I arrived just a little earlier before flag off with my friend Zhi An at F1 Pit Building. Event site atmosphere is great and we saw a lot of cosplayers. We deposited our bags with no queue at all and head to the start pen. The start pen was separated into the Dark side and Light side though we registered to each side each but we just went to the Light side start pen together. 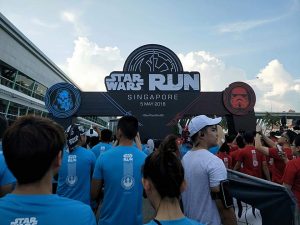 So, I thought there’s 2 route but we are just running the same route 😅 We were already sweating like we’ve finished the run while waiting under the hot sun. 23 degrees in London Marathon is called heat wave so what should the hotness in Singapore called? 😂

Flag off was a delayed for about 5 minutes and I thought by the look at how far I’m standing away from the start I would be at wave 2 or 3 but no, it was only one wave and now I truly appreciate runs with different waves to ease crowd. The road is pretty narrow with so much crowd that some runners ran in the road for the returning runners. 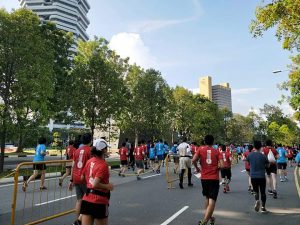 There’s also a mini bottleneck that we could only walk. And when just at 4km, I saw a 5km distance board, think that should be the distance marker for the 5.4km category instead.

My favourite part of the route is the 100m stretch outside Cloud Dome, it’s super shiok there as we could feel the air conditioning in the hot hot weather. I was really wishing for water sprinkler along the way or wet towel at the end of the run or maybe it’s time I come to peace and face the fact that we’re in Singapore, we’re hot. There’s three hydration points along the way serving water and coconut drink. Which I only took the coconut drink as it’s cold.

Coffee Tea Runners were the pacers for this event and they are doing a great job motivating and encouraging runners along the way and their 1hr 10mins pacers were very on time.

I love the finisher medal and T-shirt! Both look so chio! 😍 After the run we walked around the race village there’s quite a lot of tentage and our favourite one is the free yogurt and drinks from Marigold 😆 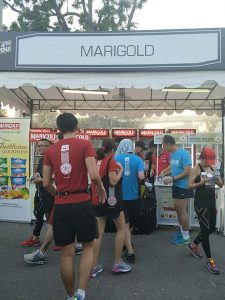 What I feel that the run would be better if the path at certain stretch of the route is wider and it’s flag off time is 7pm for the 10km category because 5pm was really too hot, I remembered last year’s Star Wars run was flag off with a beautiful fireworks at 7pm. Other than that I enjoyed the run though I kept complaining about the hot hot weather and I’ll want to run Star Wars 2019 because of the run pack and finisher medal and T-shirt. And thank you all the volunteers along the way, Zhi An had noticed a lot of pretty volunteers along the way which I think is his motivation for the run 😆 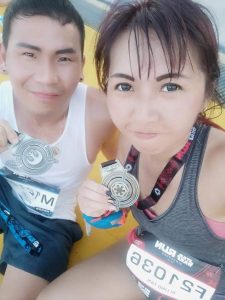