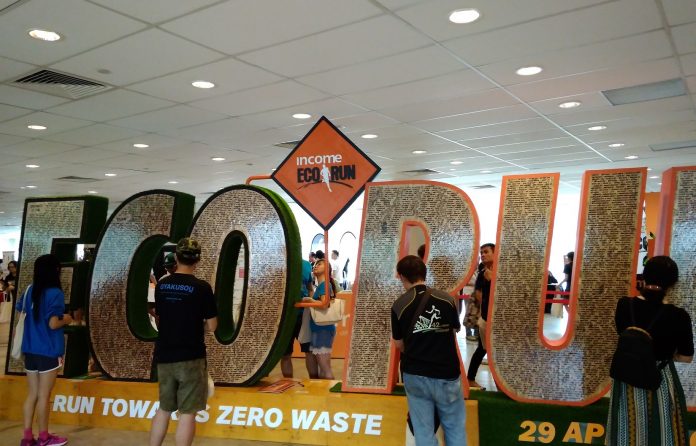 Close to 2,000 participants signed up as ‘zero waste runners’, opting to forgo the finisher medal and finisher shirt (21K category). It was highlighted last year, the organizer managed to save close to 300 Kg of materials, which included metal and polyester. Let us see how much was saved this year!

There were a flurry of activities during the 2 day REPC. Vendors at the Farmer’s Market showcase and recommended products relating to healthy living. There were also talks and workshops on such related topics. There were vendors selling sporting gears as well. 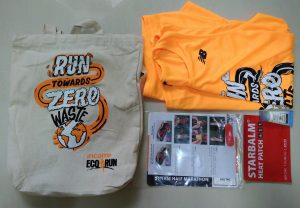 I also saw a container whereby runners can dispose to recycle their medals. Runners out there having plans of lightening your hauls of medals can give this a thought next year! 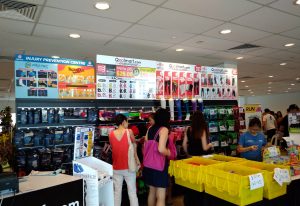 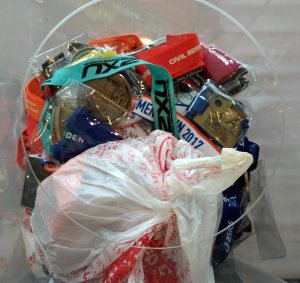 The Race Day morning was humid. I took the shuttle bus service from Bedok at 3.45 am and reached the race village at 4.05 am. By this time, many runners had already arrived, doing their warm-up exercises. The emcees were interviewing some runners on their past race experiences, as well as any target completion time for today’s race.

Somehow I felt the ‘atmosphere’ was a bit of ‘quiet affair’. Perhaps my mind was still lingering on the ‘festival-like’ start-off at last week’s Music Run.

I took part in the 21K run and was flagged off at 5.15 am in the 2nd wave. This was my first time running from the F1 Pit, though I had cycled through during the OCBC Cycle.

The race routes took the runners past the National Stadium, East Coast Park, Marina Bay Golf Course, Marina Barrage, Gardens By the Bay and finished back at the F1 Pit. At the stretch towards Marina Bay Golf, I happened to meet Si Ling (a.k.a Lingderella). We had a small chat and encouraged each other to complete the race. Hydration stations were adequate along the route, providing runners choice of 100 plus and ice mountain mineral water.

My only comment for the route was that I felt the stretch along Tanjong Rhu Connector area was rather dark. I think this was at the 9 km mark where the hydration station was at the grass patch where the runners had to run across some rather uneven ground across to the pathway.

At the finishing point, runners were given bananas, 100 plus and the finisher medal. For 21k runners, there were lanes allocated to collection of finishers shirt at specific lanes according to size. I thought this was a good arrangement.

The race village was abuzz with activities. Runners were queuing up for free massage by Starbalm. I did so too, but gave up after 5 mins into the wait as the sun was already up and ‘scorching’ those in the line. There was also free magnolia ice cream as well as showcases of recycling tips. 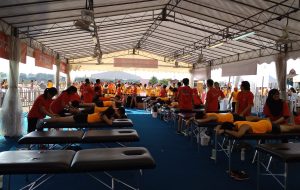 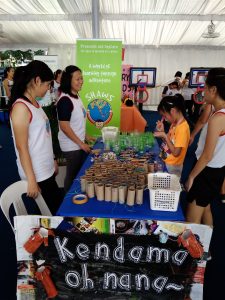 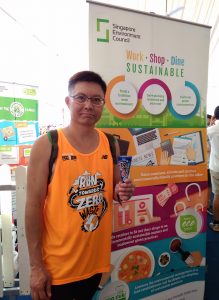 1) The last 2 stations which provided energy gel and starbalm warm spray were at the Marina area. These were already near the completion of the run. Perhaps they could be relocated more upfront at the 10k mark?

2) Perhaps more savings could be achieved by incorporating the time-chip in the bibs instead of separate shoe tags? Also, the tote bags are not necessary if participants were urged to bring our own bags to collect the race kits in the first place?