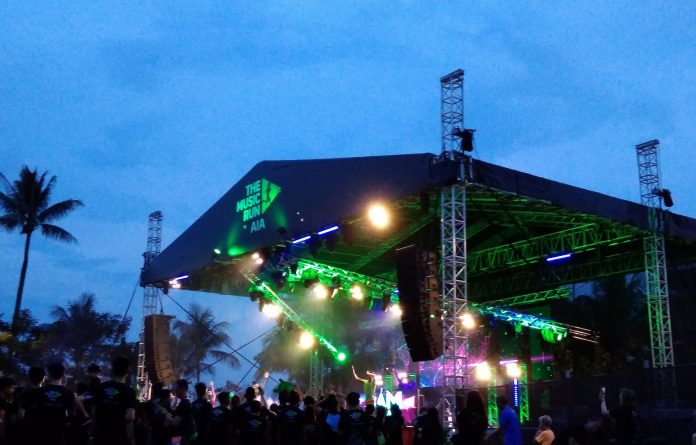 I had heard much about The Music Run, that it was the only race where music was played every step of the way. Hence I decided to get a slot for this year’s run to experience the difference. At the same time, I am treating this as my ‘warm-up’ run before the Income Eco HM next week.

The run was held on 21st April, near the Palawan Beach at Sentosa. There were 3 race categories: 5 K Fun Run, 5 K Timed and 10 K Timed.

Personally, I find the registration fees to be quite expensive for a 5 K and 10 K run. The race pack, which was collected at Capitol Plazza (Basement 2), contained few items. I was fairly disappointed. 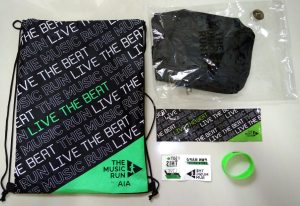 Many of us have been participating in races and I believe we tend to, at least for myself, compare amongst the races. We will gauge if a race is worth to sign up or participate every year.

Nevertheless, I told myself to make the final verdict after the run. Perhaps there may be ‘surprises’ during or post run?

There was raining in some parts of Singapore in the early afternoon. Fortunately, the rain subsided by mid-afternoon and by the time we started the run, the weather was pretty cool.

I took the Sentosa Express from Vivocity to the race village. The Music runners can board free of charge as the cost was already inclusive in the registration. We just needed to show The Music Run wristband to identify ourselves. There was a lane allocated to the runners. 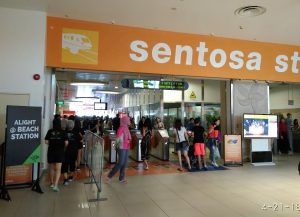 At the race village, there was only the organizer’s store selling merchandise relating to the run. But what stood out was the main stage. It must have been the biggest stage I have seen in local races, and the last I saw was last year’s Puma Night Run. 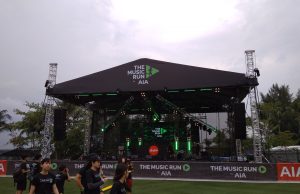 There was loud music being played continuously to hype up the atmosphere. The Fun Run was flagged off at 6 pm. There were several waves as there were many runners and the road was not broad.

The run route took us up Imbiah Trail. It was an up slope run and many runners prefer to walk this stretch. Not easy, but I don’t mind for a change. The only run I participated with up slopes were the Yellow Ribbon Prison Run, which took us through Loyang estate. But I did see some runners over exhausted and needed medical attention. Perhaps the organizer can plan a flatter route for next year’s run?

I saw only 1 hydration station along the 5 K run. This station offered runners choice of plain water and isotonic drink (H2O?). The rest of the run itself was uneventful, apart from the ‘bubbles shower’ at the bus interchange and the constant playing of music.

At the finish line, runners were given bottled water, Kellog’s cereal bar and the finisher medal. 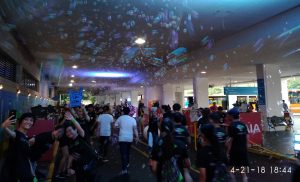 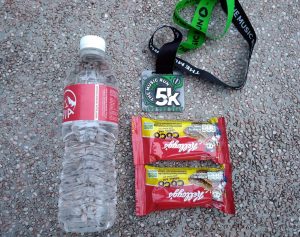 This was when the real fun began, when the night descended. The main stage came alive, with the spot lights blazing and professional singers whipping the runners, all rested from the run, into a party mood. The party, or rather majority of the runners, were actually youths. It was great to see them relaxing themselves and ‘dancing’ to the beat of the music. There were even occasional fireworks to spice up the atmosphere. No wonder, they call this the ‘Music Festival’! The night belonged to the youngsters! Hope they had a good time! 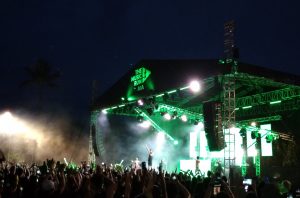 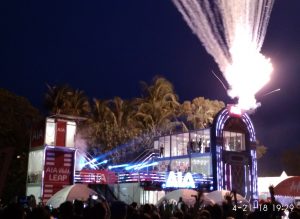 I left the race village at around 7.40 pm, took the Sentosa Express back to Vivocity and headed over to Seah Im Food Centre for dinner.

(1) After going through the event, I believe that the pricey registration fees are probably due to the engagement of artistes, the fireworks etc. Also, not forgetting the deployment of speakers blaring out music along the run route.

(2) The deployment of speakers caused the wiring to cross the running paths. Though they  were covered, I thought these covers were pretty high. They may well pose tripping hazards.

(3) I would prefer bananas over the kellogg’s cereal bars as post run snacks to replenish energy. But this is just my personal preference.

(4) Though it was a 5 K run, somehow I felt that it was shorter as my completion time was faster than my usual running’s. I couldn’t possibly be running faster as there were up slopes and have to slow down many times to ‘by-pass’ the walkers. Well, I don’t own a Garmin so I can’t tell. Will just leave it as it is.