The sound of the alarm clock startled me from my dream and my eyes opened slowly whilst adjusting to the dim light of the table lamp that I have left on throughout the night. It was 4 am on a Sunday morning of 17 December 2017 at Taipei, Taiwan. I have decided to end the year on a high note by participating in an overseas marathon and challenging myself to run in the cold weather having been running in the sweltering heat in Singapore. The day before, I had checked in at The Tango Hotel that is just a 10-minute walk to the Taipei City Hall Plaza, which was also the starting point for the Taipei Marathon 2017. I got myself ready and contacted Sam who was another running buddy of mine and we decided to meet at the 24-hour lounge in the hotel for our breakfast. Having filled up our “tanks”, we set off on foot at 5.30am and immediately the cold air rushed all over our bodies the moment we stepped out of the hotel. It was 9ºC and the cold spell had just hit Taipei. The both of us who were only clothed in our t-shirts with an additional singlet donned on the outside provided by the main sponsor, Adidas and with our running shorts and caps on, braved through the already rainy weather and wet roads to the “battleground.” Soon joining us, we saw similar participants hurrying to the destination despite the coldness. Crazy us came through both our minds as we could have lain lazily on our beds and hibernate off comfortably in this weather. We looked at each other and shook our heads.

The Taipei Marathon 2017 attracted 27,000 participants of which 3,500 of them were foreigners. There were 7,000 participants for the full marathon and the remaining 20,000 for the half marathon. Registration for the marathon started in early September 2017 and selection of the participants was by way of a lucky draw. Both Sam and I were lucky to have been picked by the lucky draw that was announced after the registration date. Before the Taipei Marathon 2017, I had participated in the Standard Chartered Singapore Marathon 2017 and almost immediately after this, I flew off to Taiwan to acclimatize to the cold weather and started on my training, days before the event. 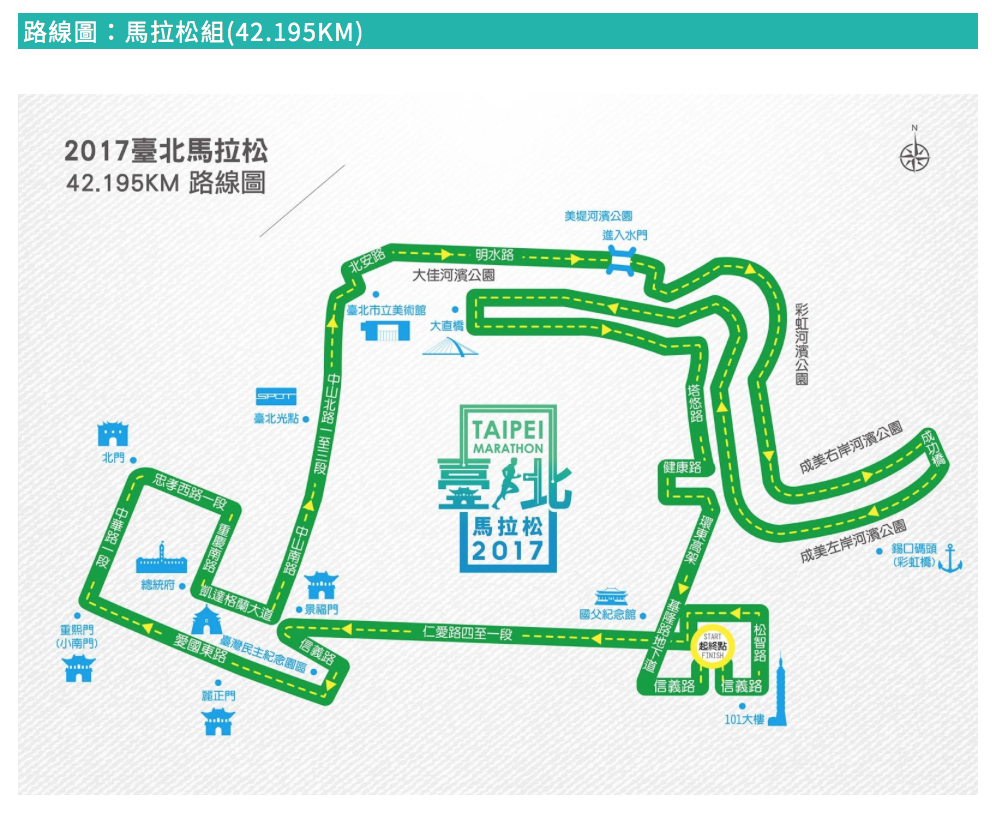 We reached Taipei City Hall Plaza at 6am and the event site was already jam-packed with participants and we had to wriggle ourselves through the narrow and tortuous barricades to get to the start pen. The coldness we felt earlier became warmness soon after due to the massive heat generated by the bodily temperatures of the other participants that stood close to each other whilst waiting for the marathon to start. Sam and I wished each other good luck and we took our positions in our different zones promising to meet later at the finishing line. The marathon kicked off at 6.30am sharp and was flagged off by the Taipei City Mayor, Mr. Ko Wen-je with much fanfare from both the participants and spectators. 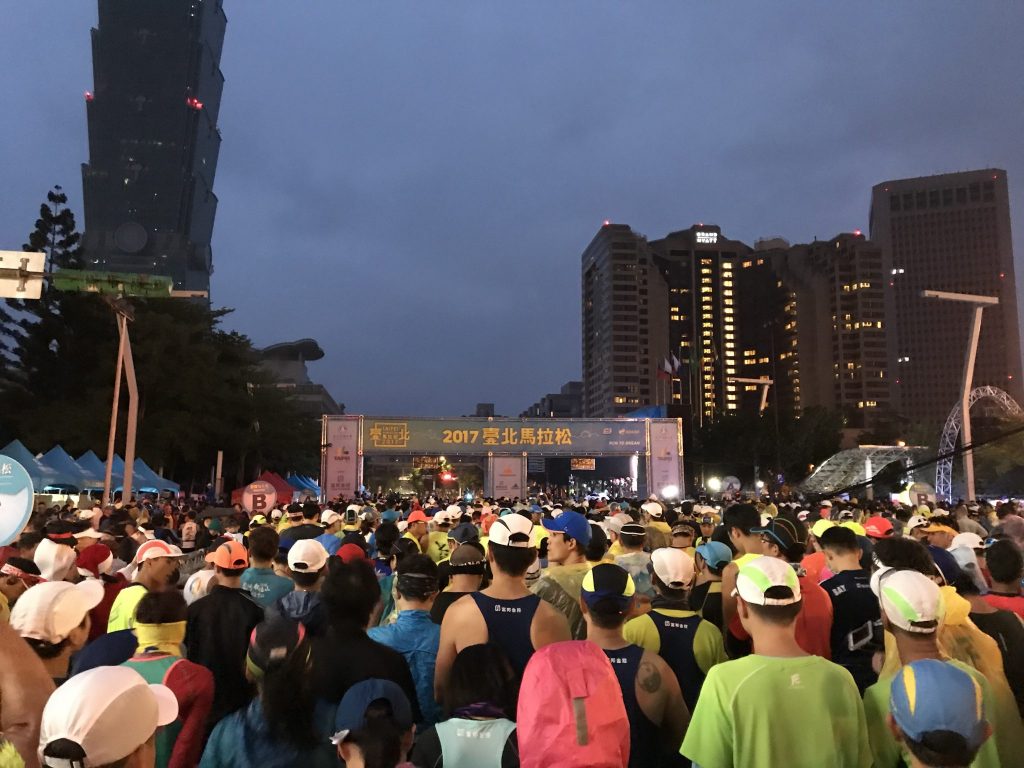 The Taipei Marathon 2017 relived the experience of going back and forth through the historical and modern parts of Taipei City. This includes cultural and historical sites like the North Gate (Cheng-En Gate), East Gate, (Jing-Fu Gate), South Gate (Li-Zheng Gate), Auxiliary South Gate (Chong-Xi Gate), The Grand Hotel Taipei, National Taiwan Democracy Memorial Park (Chiang Kai-Shek Memorial Hall), Taipei Expo Park, Taipei 101, etc. Along the running routes, there were supporters both young and old and some with motivational placards that stood along the roads cheering on the participants despite the early morning coldness and wet rainy weather. It was raining and cold winds blowing at us throughout the entire race but our spirits were not dampened by it as our bodily heat generated by our runs had dissipated the cold and the goal of completing the race as our end in mind. The highest temperature recorded that day was 11ºC and the cold air actually dries your throat off easily during the run and hence, I have to constantly replenish myself with water and sports drinks whenever I chanced upon a hydration station. You are still dehydrating even though you are out running in the cold. There was almost a hydration station at every 3km mark and besides, there were also bananas, crackers and chocolate cookies as giveaways to participants who wish to replenish their energies. At one particular station, the MacArthur Bridge (Mai Shuai Er Qiao), there were also free giveaways of Brands’ Essence of Chicken as well. I could never imagine myself drinking a bottle of this during the run despite it being thought to be an energy booster with its high nutritional value, as I would probably be nauseous and throw up after that. 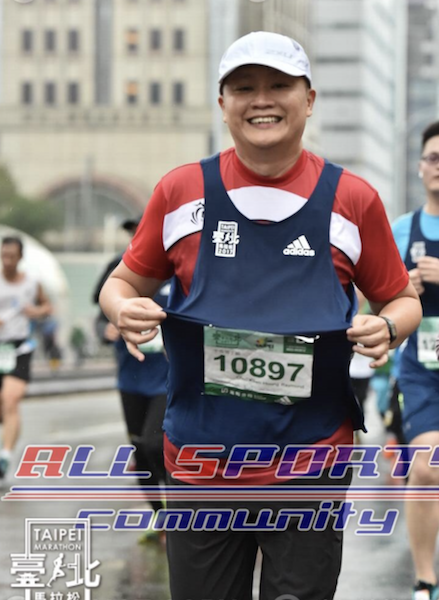 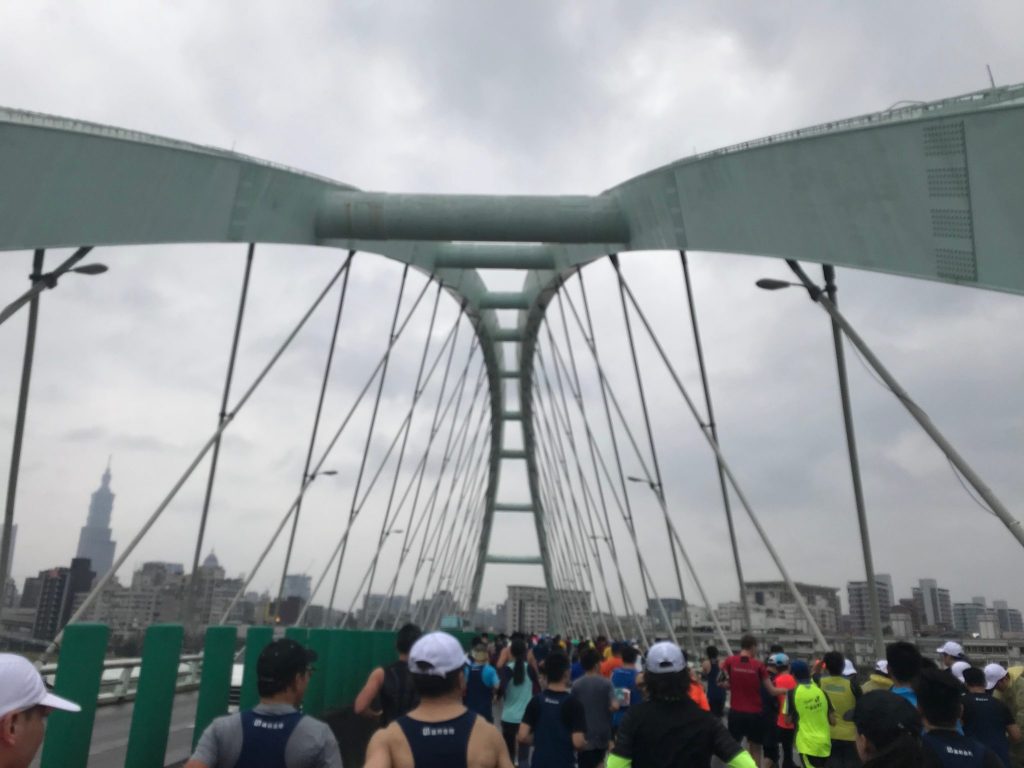 As this is the largest annual running event in Taiwan since its establishment in 1986, all affected roads were closed and there were police officers directing and controlling the traffic as well as marshallers guiding the participants that made the marathon safe and secure. The running routes were also well demarcated with distance markers and proper directional signage for the full and half marathon. The roads are wide enough to accommodate the participants with its scenic views as well. However, there were strict rules that participants have to adhere to. There are certain roads that will have to be re-open to traffic at certain timings and participants who are unable to reach the destination point in time will be disqualified from the marathon and be picked up by a vehicle and brought back to the finishing line. This is because of the high traffic intensity in Taipei and any further delays in re-opening the affected roads will definitely cause disruptions and inconveniences to the city. Moreover, those who did not complete the race within the stipulated time of 6 hours for the full marathon and 3 hours for the half marathon will not be entitled to the finisher medal and finisher towel.

Despite being inexperienced running in such cold weather, we still managed to complete the marathon on time and thanks to my constant training, I too have achieved a Personal Best that I am guessing that the weather must have played a part too J 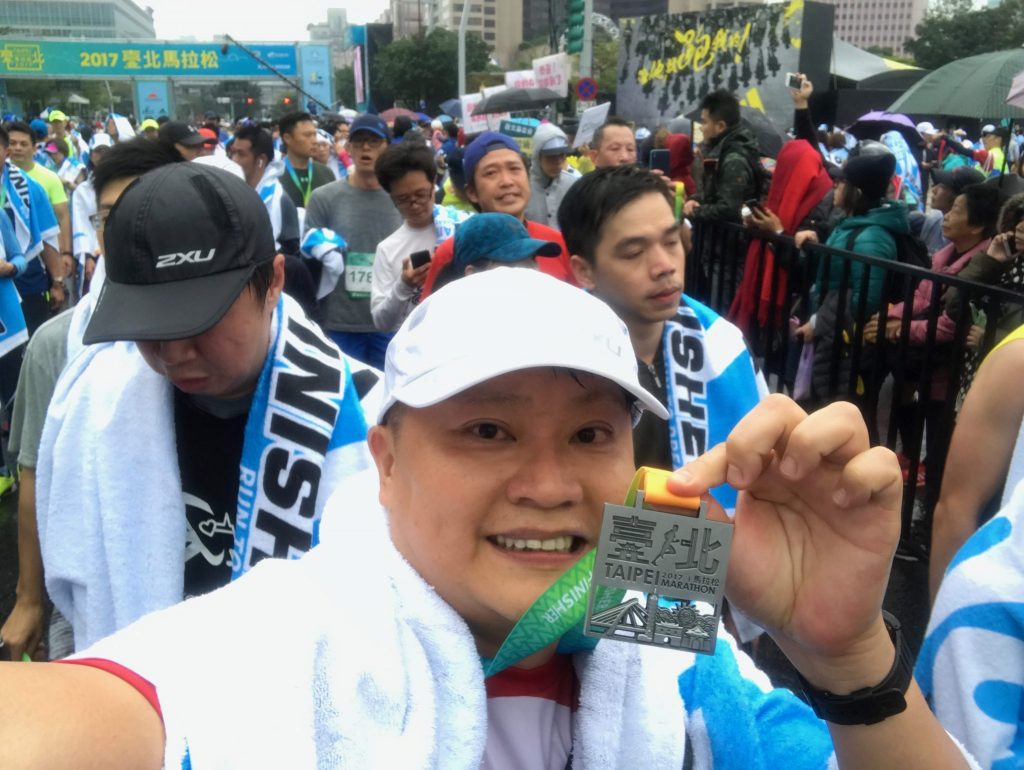 Besides both the finisher medal and finisher towel, there were also many goodies stored in our goodie bags such as sports drinks, biscuits, fruits, lunch box, sandwiches, chocolates, etc. which I collected at the race village. Hot tea was also served to the participants, which was indeed heartwarming. There were many happy faces and I stayed a while longer to mingle with some of the other participants and also to soak in the atmosphere of our achievements as finishers. It was indeed a run to remember and a Run To Dream. Thereafter, both Sam and I celebrated the successful completion of our marathon to a warm and hearty hotpot meal. An item checked off my bucket list! And will I do it all over again? Yes, of course. 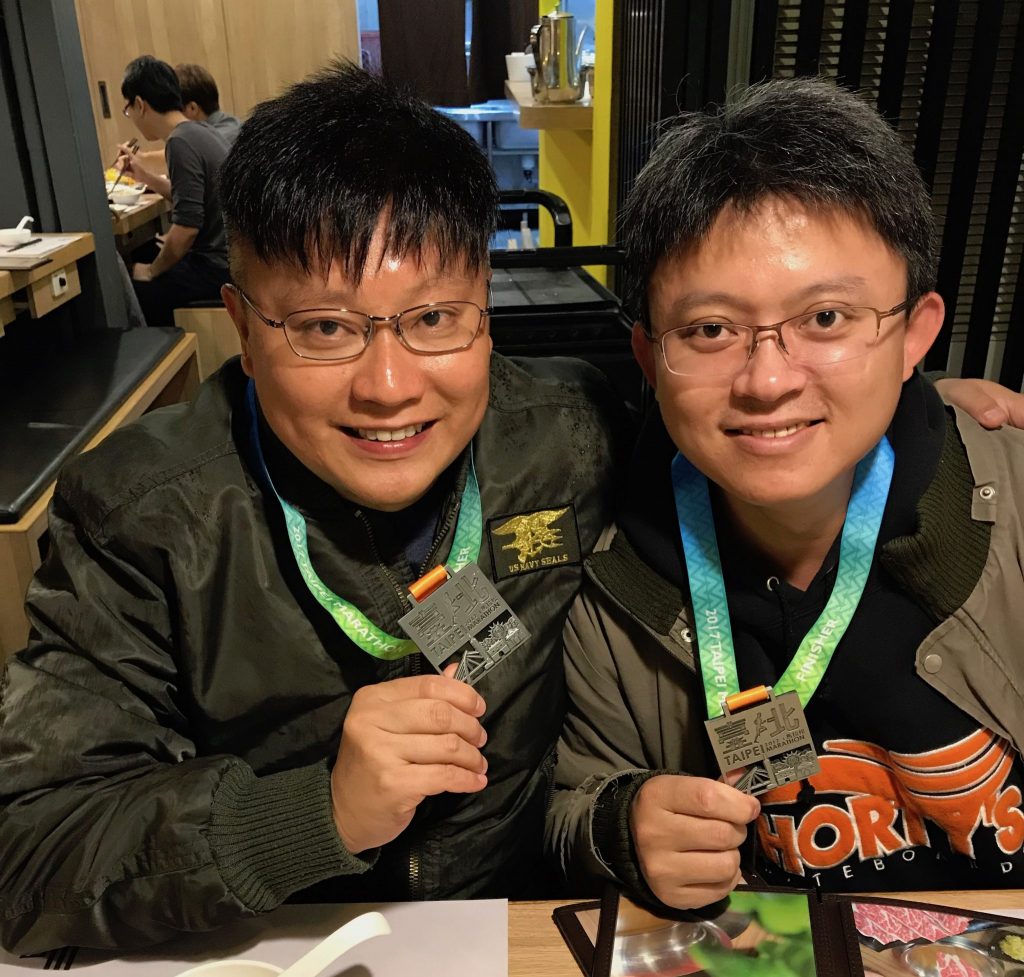