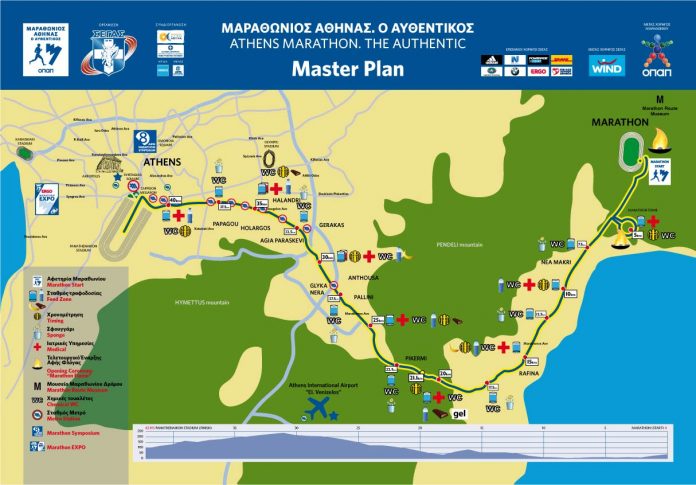 Known as “The Authentic” because it is the origin of the modern marathon, the Marathon-to-Athens race actually has two important places in history. The first, of course, is the legend of Phidippidies, the messenger in 490 BC who ran from Marathon to Athens to deliver news of a victory in battle, and then dropped dead (all marathoners should remember that the first person to do this died!). Greece’s second role in the marathon’s beginnings came in 1896, when the modern Olympic Games were revived. Held in the Panathenaic Stadium – the world’s only marble stadium, built on the site of a stadium from 2,500 years ago – the Games featured the marathon as a uniquely Greek part of the competition. Though the distance was slightly different – the 42.195km/26.2mi standard came in 1908, as I later learned at the Marathon Route Museum – today’s Athens Marathon follows the same route, and ends in the same stadium (also the site of the 2004 Olympic Marathon Finish Line).

So, the first thing we had to do was get to the town of Marathon. The race provides buses, and through sheer luck (certainly not any planning on my part), my hotel was at one of the main pickup points. I boarded at 6:15am for the 1-hour journey. We walked from the drop off point to the Marathon Stadium, leaving our clothes for after the Finish with a fleet of DHL trucks that would be waiting for us in Athens. The stadium was packed; they had 18,500 registrations this year, the biggest field ever. At the stadium, in addition to 300 porta-potties, were the Marathon Flame and the pillars showing the starting line for the 1896 Games.

I was in Block 7 and we were scheduled to go at 9:14:30am. We were a couple minutes late, but not enough to matter, and as we headed out I was pleasantly surprised that the road did not seem as crowded and full of elbows as I have come to expect. I had been warned to start slowly because the hills ahead would suck the energy right out of us, and I tend to go out fast because I’m excited, so I purposely watched my GPS and kept my pace about 30 seconds slower that I would normally start.

The race would go along Marathon Road between Marathon and Athens, taking us through a number of small towns along the way. When we hit a town, the local folks were out in force to cheer us on. In between towns, we relied on our own motivation. I was wearing my Team USA singlet and got lots of “Go USA!” and “We love America!,” and I only got spit on once (though that was by another runner just after a water stop, and he apologized profusely, so I’m pretty sure it was an accident).

Between kilometers 11 to 32 – so, half the distance of the race – the route pretty much goes uphill. There are a few dips that will deceive you, but before you know it you’re heading up again. I knew it was coming, but knowing it and being mentally prepared for it are two different things. I remember climbing a steep hill and then leveling off at kilometer 16, thinking “wow, that was probably the steepest one,” but every time I thought that, Greece had a surprise for me around the next turn. The biggest incline was between kilometers 21-23, but at least by then I was beyond the halfway point, which is mentally helpful.

Around kilometer 27 I could feel the pain starting in my legs so I decided to pop a couple Tylenol. I slowed to a walk along the right side so I would be out of people’s way while I dug through my belt for the pills. By the time I started up again, I was cold. Like, really cold. The sun was behind the clouds (it didn’t come out until I reached 33km), the temperature was about 20C/68F, but we had a headwind, and by walking I had stopped generating a lot of body heat. That meant that my sweaty clothes were getting cold and I didn’t have the heat to counteract it. I had learned this in a cold-weather race a couple years ago, but was not thinking about it in the context of Athens in November. I saw some people who had stopped to get help with something from the paramedics, and now they were wrapped in foil blankets and in some cases even had people hugging them. I did not want to be one of those people.

I managed to pick up the pace again and after a while the feeling of cold went away. After the 32km point the uphill battle also went away and the downhill battle started. I don’t have a lot of experience with hills, so I definitely learned one new thing: just because you’re going downhill doesn’t mean it won’t hurt as much as going uphill, it simply hurts in a different way. By this point in the race my legs are going to be aching whether I’m running flat, up, down, or sideways, so my plans to make up time in the downhill stretch were pretty much dashed. Doing the math in my head I realized I wasn’t likely to hit my goal time, and that’s a real psychological blow when you still have about ten kilometers to go. It makes it hard to push yourself when you know the goal is out of reach, and so I started doing more high-fives with the kids along the route without worrying about my time, which probably wasn’t a bad idea anyway.

As we came into the outskirts of Athens the crowds got bigger and more excited. I was still getting “Go USA!” but also “Go William!” and I figured if they could read my name on my bib that meant I was running too slowly and should pick it up. I also did some more math and realized that even though I couldn’t hit my goal, I could still finish faster than my last few races, and that would be nice. So I found my last bit of adrenaline and really started pushing through the final 5km. (In the end, I finished my fastest in two years, suggesting that maybe it’s not age, but instead perhaps poor training, that has led to my slowdown these last two years…and that’s something I can fix.)

Approaching one of the final aid stations, I needed something other than water, and I saw this was one of the stations that had Powerade. I grabbed a cup, and then a few meters later saw volunteers pouring cups of Coke (Coca-Cola is a sponsor, hence the Powerade). I haven’t had Coke in a race for a few years but figured “why not?” and grabbed a cup for the road. A tiny sugar and caffeine boost could be helpful in the final stretch.

As we neared the Panathenaic Stadium the crowds got really big, and really loud. Running through the final kilometer I felt my excitement rising, knowing that the last 170 meters would be on the track inside the stadium itself. A friend had told me to run that distance slowly, just to absorb the feeling of running in such a historic space. I took his advice, even if it meant losing a few precious seconds, and am glad I did. It was like finishing as an Olympian. I was looking at the crowds in the stands so much that it’s a miracle I didn’t run into any of the runners in front of me.

Overall, I enjoyed it. The weather was pretty good, the race is very well organized, the runners had plenty of room on the roads, and the crowds got into it. It’s very international; in my block alone I saw people from the US, UK, Russia, Italy, Belarus, PRC, Taiwan, Latvia, Germany, Portugal, Mexico, and Switzerland. And of course, there’s the history; it isn’t just a marathon, it’s THE marathon.

Getting to Athens is easy enough, even though the flights are pretty long. Scoot flies between Singapore and Athens twice a week, and most of the European and Middle Eastern airlines can get you there with one connection. Hotels in the central part of the city, especially around Syntagma Square and the Acropolis areas, can be a little expensive, but they are still reasonable, and you can also find Airbnb’s around these good neighborhoods. The marathon also gave us free public transit passes for 5 days, which I put to a lot of use.

If you’re looking for a run through a city on flat streets with huge crowds of spectators, Athens is not the place for you. But if you want to dip yourself into the history of the sport and take on a challenging course, then nothing beats the Athens Marathon.