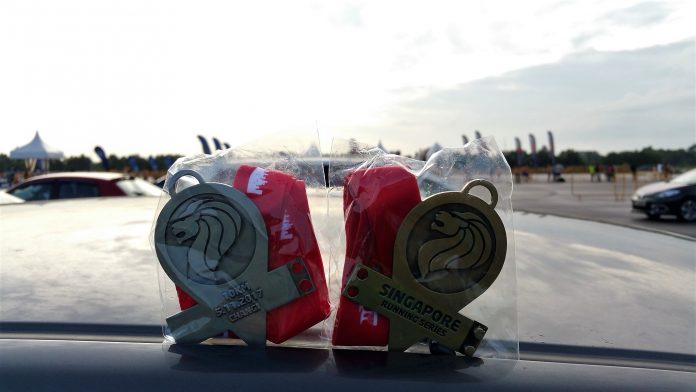 This was the second year I participated in the Performance Series.  I had run the half marathons in the first two rounds this year.  I planned the last to be 10 km because I had intended to participate in the Spartan Beast originally to be held about two weeks after this event.  As it was, due to the slower recovery of my spinal fracture and postponement of date and venue of Spartan Beast to JB, I decided to skip the Obstacle Challenge Races for this year.  Still, I would be doing the Swissotel Vertical Marathon instead.

Collecting the race pack was again a breeze at One Raffles Place Shopping Mall.  This time round, I knew a few friends would be participating, two from SuperHero Runners (Chi Song and Rebekah), Chris Shaw (21.1km) and SY Chia.

It rained in most parts of Singapore the night before the race. I didn’t concern myself too much this time with the weather forecast (unlike the Newton’s Challenge which I would be following up later, due to my schedule, it has been delayed). Plan was to wake up 4.20 am in the morning and then made my way to Changi Exhibition Centre early for wave 1.

Took my usual pre-race peanut butter bread with coffee.  Did my morning routine and took a shower, dressed up and went off by 5.05 am.  Reached there very early, used the toilet cubicle and then waited with the early birds for the start off.  Nearer start time, I saw the SuperHero runners making their way and spotted my friends.  Chi Song and I briefly said hello over the barrier – saw him at Ultra 50 km and became FB friends just a month ago.

6.30 am and the race was flagged off in time.  The ground was wet and the skies were still dark but the weather was cool and there was some wind at times.  It was a pretty simple route, 5 km to and fro.

I was wearing the Vomero 12 for the first time for a race and it was the right decision given that it was wider than the Pegasus 33 which had somehow cut into my left foot in the Newton’s Challenge.  For the first time in a long time since my injury (which coincidentally was just a year ago), I managed sub-7 min pace on average.

So I was happy with a post-injury PB for 10 km.  After collecting the medals, (an extra one because I had signed up for the whole series), I was pleasantly surprised to meet Chris and his beautiful wife.  He actually called out to me right after I turned back from the queue.  He improved upon his half marathon timing since the last half marathon just last week (also the Newton’s Challenge), still recovering from his injury on his left leg ! Yet another Transcending Yourself hero (and heroine).

The distance was slightly short of 10 km so I went running in the huge car park to make up for it, after collecting the medals and meeting up with SY.  He was making a comeback to 10 km race after his recovery too, and did well too in this race – he should be blogging about the race.

I enjoyed the race this time too for its ‘simplicity’, read efficiency.  The road was essentially flat (good for PBs).  Hydration consist of water and Lucozade which was placed at about 1.5 km and just over 2 km or so.  So basically this meant if you took it at 1.5 km, then it will be about 6-7 km before you got to the next hydration stop (because it was a loop) for 10 km. I didn’t have much issue with this but I guessed some runners may find it challenging if they started later (due to the heat) or took longer time.  The race results were released almost immediately (soon after the race, my friend messaged me my results)!

Usually, I would consume one energy gel for a 10 km race.  This time I decided to go without it and managed to complete without any issue.  I don’t train with gels actually but I don’t usually go further than 7 km in my own training routine most of the times.  The longest I go would be 15-16 km without gel or hydration at a more leisurely pace.

My trusty Garmin told me I had improved my vo2max by another point, which had gone up two points last week from Newton’s Challenge’s efforts.  I guess I must be doing something right so far.  When I am able to sustain the same level, I hope to share a bit more on that through the blogs.  As it was, after driving back, I went for another 1 km run.  I am continuing the effort to raise some funds for Singapore Cancer Society through my 86 days’ challenge of running 500 km.  It takes some level of effort and discipline to run about 6 km on average per day if I do run everyday of the 86 days.  And I don’t and can’t do every day due to other commitments and also I learnt I needed to let my body recover at my age too.  My spinal fracture is healing but the tailbone pain has been persistent unfortunately.

However, I will keep at this and complete 500 km by day 86 and hope folks continue to support.  So far a handful of folks has noticed the old fella here trying to make a difference.  Bless all who had been generous.  I sincerely hope all would take time and support to help the Cancer Patients and their families.  (https://singaporecancersociety.give.asia/movement/run_500_km_in_86_days)

Finally, a big thank you too to JustRunLah! for the discounts for the whole series and I am glad this time to end this series with the PB for my 10 km distance post injury.  I’m sure many will also look forward to what the new series will bring too next year ! Run Safe and Run Happy in the meantime.