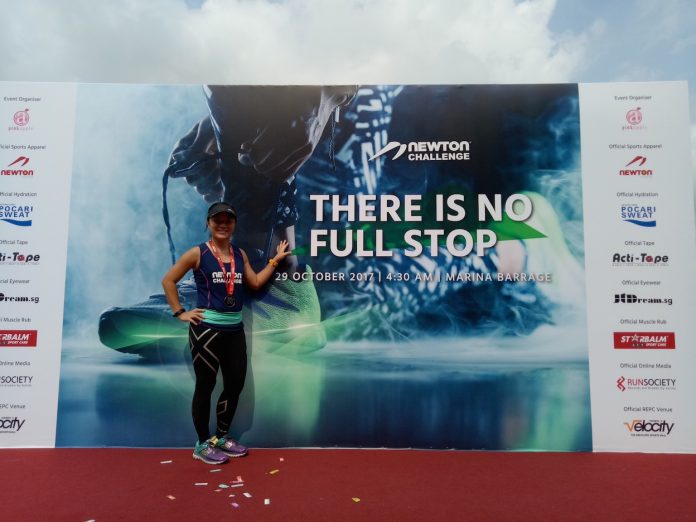 Newton Challenge is my favourite race and a must-do race every year. Reason is simple, their running singlet and finisher polo tee are nice and they provide post-race food! No other road race provide such good food after run. It would also be my long run training before taking on the Full Marathon at the Standard Chartered Singapore Marathon. I believe many others are also thinking the same.

I woke up at 2:30AM to prepare and took the 3:25AM shuttle bus from AMK. Reached the race venue at about 4:00AM and wanted to use the toilet but saw a very long queue so skipped it and walked to the start pen. The walk to the start pen was quite long and luckily I was early because there was a large crowd in queue behind and quite chaotic according to the emcee.

Flag off was on time at 4:30AM and I ran at a comfortable pace until I saw the portaloo at the first hydration point and decided to use it so that I could run uninterrupted later on. Queuing for toilet had wasted a lot of precious time. I forgot to drink less water in the morning!

I was thankful that the Pocari Sweat and water at every hydration point were icy cold. Yes!

I took the first gel after running for about 52 minutes and planned to take another one about 50 minutes later and the third one about 1 hour later and I followed this plan. Glad that I didn’t get diverted at the 21.3KM point and my half marathon timing was 2:37 personal best time.

I was running at a consistent pace until 22KM and started to slow down. Fitness was not there. I was mentally prepared for the slope at 27KM at Marina Barrage as it was the same as last year’s route. I slowed down even more after 28KM because I felt uncomfortable at my upper abdominal area and I didn’t want to throw up. I am not sure if this was due to the gels I took.

The last 4KM around Gardens By The Bay seemed like never ending with “screaming” legs. I told myself to take it easy and press on. So happy to see the finish line and ran faster to cross it. I recorded an unofficial time of 4:19 from my Garmin watch and it was 17 minutes faster than last year’s time. 🙂

I went to collect the post-race food and took a box of yellow rice and mango pudding, skipped the ice-cream. There were other items too but I didn’t take. I was ravenous and gobbled up the rice really quick. The food was delicious! While eating, the emcee on the stage was asking people to drop their lucky draw coupon into the box that he was holding but I was already sitting down on the floor eating and I really didn’t feel like getting up so fast so I didn’t.

I enjoyed Newton Challenge run. It is always an event well organised with delicious post-race food waiting for you after you cross the finish line with pride. 🙂