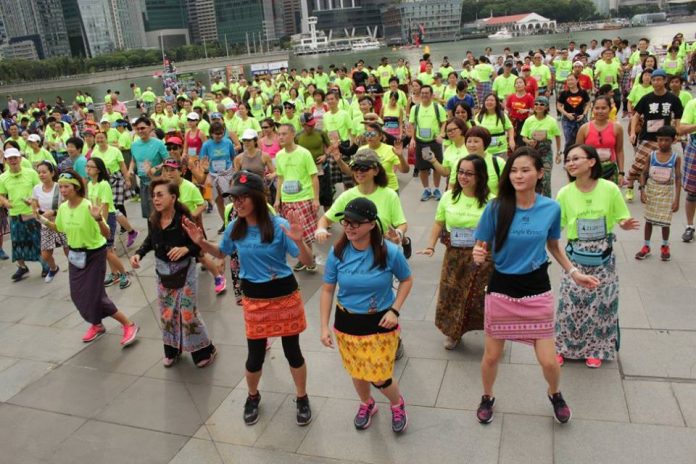 September is a lull month for my run ‘routine’ ie no races.  Having completed two marathons a few months apart with my first half marathon trail following soon after, amidst the 10 km races, and the TOGO817 (cycling 817 km in 7 weeks) it was probably a good decision too.

Then I had a message from Ali Akbar whom I knew from FB accounts, about the Lunghi Run.  He is one of the organizers and the creator of this event.   I did wonder about taking part.  As folks may know, I just don’t like to be too hampered with stuff when running, be it a smartphone, running hydration belt or even now, a lunghi (or sarong).  Still, it was also a charity run, donation going to MINDS so I signed up soon after.  I asked some of my running friends but due to the timing, only my other FB running buddy was available – Chia SY.  (Others were also in Sydney for the Sydney Festival Races.)  SY was coming out of a plantar fasciitis recovery.  Still, his pace was relatively fast for his age and for his injury (he went sub-6 min/km for this in the end).  It was a fun run anyway, so no pressure and we arranged to meet for the fun race.

Collection was a breeze on a Sunday at Telok Blangah RC.  Met Ali in person and had a wefie too.  I was quite surprised by the quality of the race pack – definitely value for money if you are the type who are careful with spending budget.  A lunghi was also in the package besides the usual tee sponsored by Compressport.  As the date draws nearer, I went on the internet to look for demo on how to wear the lunghi.  There is a number of ways.  But I took the easiest way.  I also learnt that it probably makes sense to just put the lunghi over yourself rather than try to wear it feet first like what most folks would do.  Now the only concern I had was, whether the lunghi would drop if I were to really run.  I would not know till that day since I didn’t feel like I could just practise it at the park nearby.

Race day was a Saturday afternoon and luckily for us, it was not too hot.  I deposited my bag after snapping a couple of pictures at Marina Bay.   A crowd of a few hundreds were gathering near the stage.  Understood that about 700 participants signed up for the whole event into its 5th edition.

Ali demonstrated the alternative ways of wearing the lunghi.  The first one was similar to what I saw on the internet which I adopted.  I just drew in my stomach, took each side and flip across and rolled the top tightly outwards and downwards.   It felt snug and comfortable.  Did some light warm-up.  Despite the demo, I realized looking at post run photographs, most folks did it their own ways.  Didn’t matter, it was for fun, and whatever works…

There was a dance cum warm up exercise routine going on and you could see lots of smiling faces trying to follow the movements.  Families, couples, singles, young and old folks with variations of the lunghis.  Soon it was time to start.  The race was flagged off with cries of Lunghi Lunghi Run. Most folks were happy to just walk.  Some started off running, and so did we.  It was a short run, 2 km to Marina Barrage and then back, making up the 4 km.  I did the U-turn a bit further from the volunteer but still, when I made it back to Finishing point, it was closer to 3.8 km.  SY had raced ahead of me, and then ran an additional couple of hundred metres to make it 4 km.

First time, I was probably one of the first twenty to reach the finishing line since most of them were still enjoying the scenic route and chatting.  On reflection, it was a bit strange, but everyone has his/her own idea of fun.  For me, it was running as fast as I could in a lunghi and feel the wind.  I wasn’t sure about SY but he was caught on cameras posing with his ready smiles and achieving his post recovery sub-6 min pace, perhaps.

Bananas and Pokka Sports drinks were provided at the finishing point.  We collected the medals too.    There were also many photographers for this event.  This was also the only race this year so far which I stayed back to witness the lucky draw.  A cheque for $6000 was handed over too to MINDS.   In fact there was also a surprise celebration with birthday cakes for those born in September, 5 designs for the 5 years !  SY was ‘thrilled’ to be interviewed by Pris Chew, one of the regular bloggers on running events.  He called me over towards the end.  Pris happened to be one of the September kids too so she went off to enjoy the cake with the others after a brief chat.

Running in a lunghi was definitely one of the most ‘fun’ races I enjoyed.  For its carefree atmosphere, supporting multi-racial theme more effectively than some that I’ve seen, in a more subtle way.  Some folks got away with awards for the most well dressed family, macho male or female dressing etc.   Next time if you want some short and good fun (or dress up too) while still having a meaningful ‘race’, or even just a stroll, then this is the race for you.

Certainly, the sentiments rang true for me as I remembered the write-ups when I looked up the objectives of the event initially.  “The Lunghi Runs have always been a non-competitive and non-profit event. Some runners even describe it as a ‘runner’s reunion’ and a ‘running festival’. But despite the laissez-faire setting, the show of solidarity, unity and charity is strong. And it will continue going strong.”

I have a good post-run coffee chat with my virtual running buddy, one of those rare occasions too, after a relaxed ‘race’.  Run Safe, Run Happy.

*This may also be a good time to stop blogging for a while as I re-evaluate how my efforts at blogging and running are going thus far.  Been a good experience for me as I share about the races I ran, albeit at this age and writing long-winded, as proper English as I could.  But perhaps I may still be back sooner than I thought.  Enjoy the runs in your life.