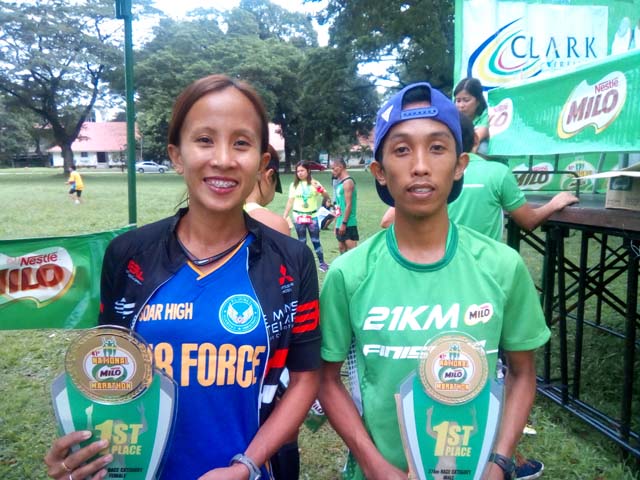 Gilbuena, a member of the Duathlon National Team, worked her way to the Women’s Division crown in 1:33:56 in a battle with last year’s Batangas Leg champion April Rose Diaz who clocked 1:34:48.  Maximina Daltz checked in at a far Third Place in 1:52:39.

First-time winner Cruz towed a bunch of fresh faces in dominating the Men’s Division in 1:20:02 followed by Efraim Inigo (1:22:48) and Neo Anthony Saison (1:23:21).  Prior to the race, Cruz’ best effort was taking Third Place in 21-kilometer category of the 2015 Metro Manila qualifiers.

The champions received PHP 10,000.00, a trophy and gift items from sponsors.  More importantly, they and all those who made the cut-off times of their respective age brackets will earn slots in the National Finals to be hosted by Cebu City on December 3, 2017.

Runners from Luzon can still catch the remaining four regional qualifiers in the coming weeks to be staged in the cities of Tarlac (August 13), Naga (August 27), Lucena (September 3) and Lipa (September 10).  After that, the MILO Marathon begins its southern swing with a race in Tagbilaran City on September 24.

Part of the registration fees collected will go to the MILO Marathon’s advocacy of giving free rubber shoes to poor but deserving public school children in the different host cities.  Hopefully, a new generation of sports champions will be born out of these beneficiaries.