“No Regrets! It was always going to end no matter what – win, lose or draw.”

Gatlin’s win drew boo-es from the crowd. He has often been cast as the villain as opposed to Bolt’s hero status. This is due to the 2-time ban he has served for doping. Gatlin however still has major respect for the man he defeated. Justin Gatlin displayed humility, bowing down to the fastest man on earth – Usain Bolt! 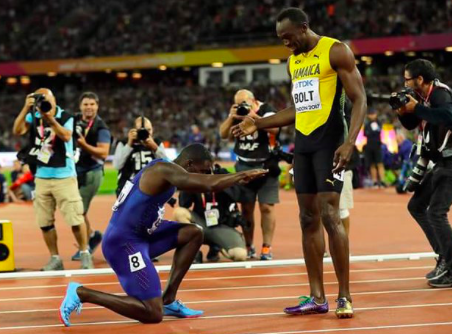 Usain has raced lightly this year. He knew he was not as in shape and all he could do was his best. This is also why he is glad he isn’t running his favourite event – the 200m. It probably would have been worse, he said. After the semi finals, he knew if he didn’t get a good start out of the blocks, he was going to be in trouble. But, just because it was a bronze, it didn’t mean the night was not magical. Bolt cruised around the track for 10 minutes – detouring into the stand for selfies with Jamaican fans that came out to cheer for him – one last time.

Usain still has the 4 x 100m to compete in next weekend.