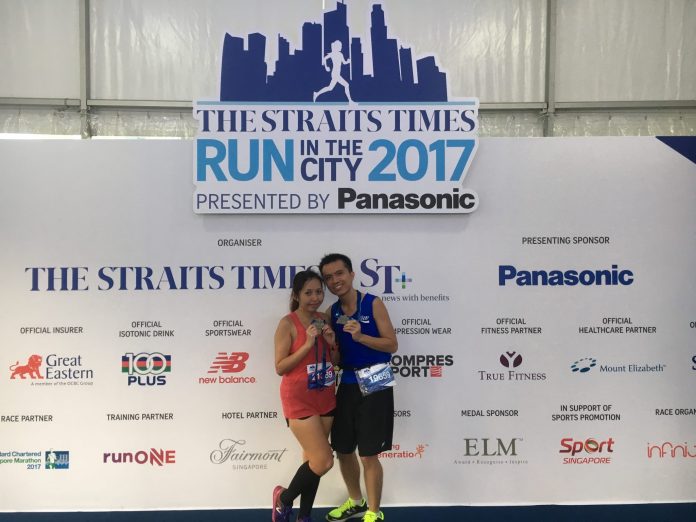 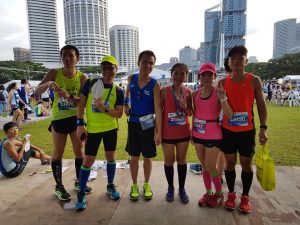 There is 3 categories for the Straits Times Run the 18.45km, 10km and 5km. This 18.45km category is because Straits Times is established in 1845 and this is my 3rd year running this category.

Not really a good run as I didn’t have enough rest was yawning for so many times while waiting for the flag off 😅 Woke up late and I really dreaded waking up and ask myself why am I doing this over and over again? Signing up races and forfeiting a nice weekend morning to nua in bed 😂 Took Grab down and immediately rush towards the start pen but there’s a holding area and waited quite a while walking at snail pace to enter the start pen as the securities check our race bibs to let us enter the start pen. Ever since I downloaded the Grab app this year, I find the fare quite acceptable and I don’t buy shuttle bus tickets for races anymore since I don’t need to wake up so much earlier to go to the MRT station to catch the shuttle bus and some runs don’t even have shuttle bus at my nearest MRT station 😭

Flag off was delayed. By right flag off is at 5am for the 18.45 category but we were flagged off around 5.15am. Don’t know the reasons of the delay, it’s either because of my blurrness in the early morning I didn’t pay attention to what the emcee is saying or it’s the emcee too good at smoking me off 😅 Thought it would rain as it’s quite cold and breezy but luckily weather is good! It’s very shiok at some parts of the run because it’s really windy though there’s some resistance as we are running against the wind, when there’s no wind it’s so super humid 😭

Once flag off, it’s really squeezy and not easy to manoeuvre around. If I use driving a car as an analogy, I’m driving dangerously as I’m weaving in and out and I scared accident 😂 Don’t want to kena accident like tripped and fall but bo bian just run. Though not aiming to be Mo Farah but kena blocked in running can be quite sian and at the same time I also hope I didn’t block others lah 😅 But just be a tiny weeny more conscious of the keep left rule will make running more enjoyable right 😊 Just picture the lanes used for 60km or 80km car then one car drives there at 30km all cars behind will over take right? 😅 Luckily like after about 4km or 5km then there’s starting to get more space to run. 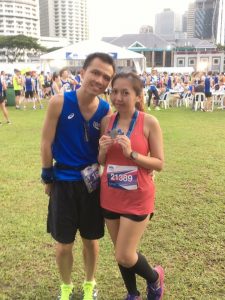 I was counting down every KM and lucky me to have Willis for the whole 18.45km motivating 😘 Nearing the water point before 10km, I heard a familiar voice from a far, a very motivating and encouraging voice is cheering for the runners and it’s Coach Arnel from Pinoy-Sg Runners! Really so happy to see him 😁 And we will be pacing for the upcoming Race Against Cancer in two weeks time and this is my first time running as a pacer 😁

Then I was counting down telling myself it’s just another 8km something more! I can do it! Then seriously it’s moments later, 10km distance board says something like this: You are NOT there yet 😂

My feelings sort of kena cheated by the map of the route. Though no need to run up the Marina Barrage torturous slopes but once exited Gardens by the Bay East and was guided by the marshals to run the slopes I tio stunned and this emoticon explains it all: 😱 Bo bian no strength so the whole up slope I walk 😂 But ok lah, routes subject to changes already stated in the route map 😆

Once we completed our run, we collected our finisher entitlements and was given a super cold towel which just feels so fantastic after the run! 😁 And there’s the 100 Plus cool zone spraying mist of water to cool us down 😊 Really love big runs as they have big sponsors and logistics is enough. I asked for another can of 100 Plus and the volunteers gave me 👍🏻 I think the medals is nice just like the previous two years collecting 😍 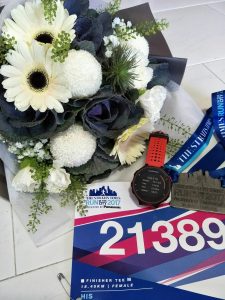 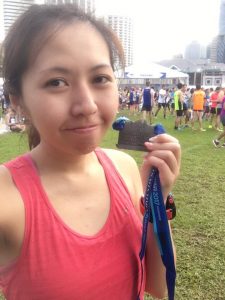