As part of ‘May the 4th’ celebrations and to mark the 40th anniversary since the release of Star Wars: A New Hope, a three-day extravaganza – STAR WARS DAY: MAY THE 4TH BE WITH YOU Festival will take place at Gardens by the Bay from May 4th to 6th. Organised by local event organiser Esprimo with the support of Singapore Tourism Board and event partner Gardens by the Bay, this festival celebrating the STAR WARS fandom will culminate with the inaugural STAR WARS RUN Singapore 2017 on the final evening of the festival. 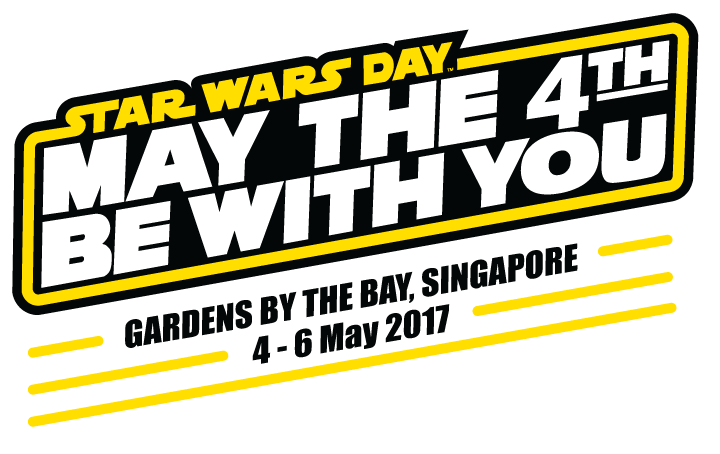 For the very first time, Supertree Grove will be transformed – with a distinctive ambience, themed activities, character appearances and a never-before immersive experience, you will be transported to a galaxy far, far away. The first STAR WARS extravaganza of such a scale in Singapore, this is a festival not to be missed in the week of May the 4th.

HIGHLIGHTS AT ‘STAR WARS DAY: MAY THE 4TH BE WITH YOU

When dusk falls, the Marina Bay skyline will be further illuminated with SaberTrees light-up. This will happen from 8pm – 12am. This is Southeast Asia’s largest lightsaber light-up activation where the iconic Supertrees at Gardens by the Bay will be transformed to glow in resemblance of lightsabers, the weapon of choice of the Jedi and Sith warriors.

Twice nightly at 7.45pm and 8.45pm, catch the Garden Rhapsody: STAR WARS Edition featuring a dazzling 15-min music and light composition. This multi-sensory treat, set against the epic STAR WARS soundtrack will take place over these three nights only at the Supertree Grove, so don’t miss it. It will be an experience to remember!

To round off the night, hit the dance floor for some STAR WARS themed Silent Disco on May 5th and 6th from 9 – 11pm.

Joining us all the way from a galaxy far, far away, one of the heroes of the Rebellion, Chewbacca or Chewie as he is known to his close friends and Kylo Ren, the dark warrior from the First Order will both be in town for the festival. Whichever side of the Force you are on, you will not want to miss out on the chance to take a photo with these two characters that are making their first ever appearance in Southeast Asia.

Decked out in their own personalized custom made movie accurate costumes, catch the costume Fan Clubs, the 501st legion, Rebel Legion and FightSaber, as they celebrate the villains and heroes of the STAR WARS saga by bringing your favorite character to life.

May 4th (at Supertree Grove)

May 5th (at Supertree Grove)

May 6th (at Supertree Grove)

May 6th (at Meadow; access only for participants with run bibs)

As part of the festival, the inaugural STAR WARS RUN on May 6 at The Meadow at Gardens by the Bay aims to captivate both amateur and professional runners, as well as STAR WARS fans with fun experiences, themed around the brand’s memorable stories and out-of-this-world characters.

With two distances – 4.5km or 10km – to choose from, this is a run for every age and strength level. Participants can choose to experience the 4.5km route, joining the Rebellion on their plight for justice on the Light side, or walk in Darth Vader’s footsteps to uncover the great powers of the Dark side. For the test of ultimate endurance, choose the 10km competitive route which passes through a section of the 4.5km Dark side thematic route.

A kaleidoscope of colours will light up the night sky as pyrotechnics goes off at flag-off of the 4.5km Dark and Light side routes as well as the 10km competitive route. Participants and spectators should keep an eye out for Chewbacca and Kylo Ren as they will both be flagging-off the STAR WARS RUN.

With engagement zones on both the Dark and Light side routes, a visual spectacle awaits as each zone comes alive with light projections, music as well as photo opportunities with STAR WARS themed surprises.

After the run, the fun-filled night continues at the race village with STAR WARS themed activities, interactions, food and beverages as well as an outdoor movie screening of STAR WARS: THE FORCE AWAKENS. Runners with their race bib will gain access to the exclusive meet and greet zones at The Meadow for photo opportunities with Chewbacca and Kylo Ren.

Gather your squad, choose your path and register now.

Marvel at the iconic All-Terrain Scout Transport (AT-ST) – first introduced in STAR WARS: The Empire Strikes Back – standing guard at the Supertree Grove. A mainstay on-ground throughout the festival, this is your chance to get up close and person with this towering replica. For a closer look, head up onto the OCBC Skyway for an aerial perspective of the two-legged, armored walker set against the panoramic Marina Bay skyline.

Totally immerse yourself in the ultimate Star Wars experience! Transport yourself to a galaxy far far away! Make sure you make your weekend spectacular by being a part of the Star Wars festival!