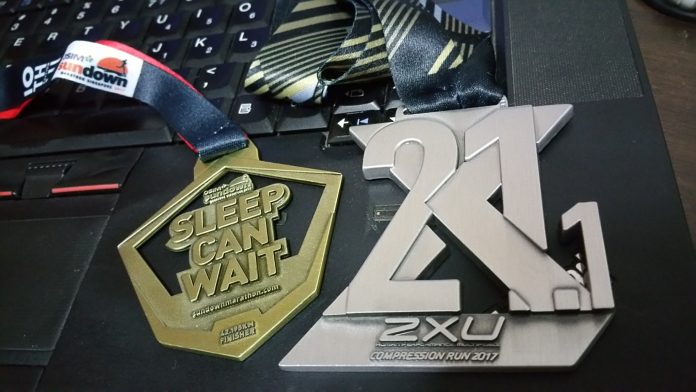 I promised myself to run a full marathon and a half marathon a week apart last year.  I wanted to run them to support the Children’s Cancer Foundation cause.  It would have been challenging for an amateur 54-year-old to do this after picking up running slightly more than 3 years ago.  But it became a bigger challenge when I fell from a bike and fractured two lumbar bones (spine) and coccyx pain in early November.  I also found from the comprehensive x-rays I had then that I suffered a fractured wrist bone too.

But a promise to myself was still a promise so I did what I could to get back to running.  I couldn’t do anything much for about 3 weeks after the incident as the pain was really intense.  Slowly I got back through walking and then jogging.  Even when I was back to running I knew it was different.  But the good thing was that just before that stage, I had recovered from Plantar Fasciitis and severe black toe nails.  So it was like one episode after another of lessons on running, training and recovery.

Still, I managed to get back to running regularly but maximum of 16 km was all I attempted in training for the full marathon (Sundown) due to the pain on the back.  Managed to complete that marathon (4th one in 3 years) with timing of 6:49 hr (Part One’s Blog).  Slowest to date but I considered it a PB in my current state.  But the actual race wasn’t finished by half since I needed to be fit enough to run the half marathon the week after !

Still, I was happy that my good friend (also ex-colleague) Francis was able to make his debut into full marathon and finished with a very good timing that was more than an hour ahead of me.  He waited for me to complete and cheered me on this marathon so it was the first one where I had company in a full marathon race.

In the meantime, my friends especially on FB were also encouraging.  Last couple of years I got to know a few running friends who were just superlative supporters.  More so when we know each other from running and FB.  One of them was Chris and he was amazing too – he also triumphed over his injuries to run races at even relatively much faster pace than most folks younger than him.  He was the only one who supported one of my earlier races when I tried to raise funds for another charity.  This time round, another running friend/neighbor, Mrs Tan was inspired too to contribute to the Children’s Cancer Foundation and I sincerely thank her and hope she is not the last one. (Please remember to support by clicking on link below after reading !)

Back to the half marathon.  My strategy was to not think too much of the full marathon that I just completed.  I ran that race with flu too but surprisingly after that race, the flu symptoms had all disappeared except for a bit of stuffy nose.  I felt some nerves pain (needles on back) but they disappeared after the first day.  I walked 3 km on the second day as recovery, ran 2 km on the third day and then 4 km on the 4th day.  After that I rested and psyched myself up for the half marathon.   Prayed for fine weather given that there was forecast of inclement weather that morning.

Woke up at 3 am that morning, got to the Marina Square car park before 4 am and found myself squeezing with the crowd to the starting line in wave 3 !  The night was humid but the weather held fine – thank God.  The 2XU Compression Run had been very well organized from race pack collection to the pre-communication on weather contingencies.  The route layout was probably fine if there had been not that many tight/narrow stretches (at least 5) in the first 10 km (including a short flight of steps down) and then up those steps again at about 12 km with a full crowd.  Based on the race results, there should be about 21000 half marathon runners and there were 8 waves altogether.  I guessed depending on where you were in the waves, when you hit those crowd jam, then it was rather frustrating to stop and shuffled through those spots.

Surprisingly I found myself feeling quite strong (relative to the week before) and raced my heart out the second half though I didn’t get a PB – 2:52 hr, better than my target of 2:55 since I managed to complete the most recent half in 3 hours.  It drizzled a bit towards the end of first half but it seemed to bring with it a breeze so it was enhancing rather than impeding.

It was a relief still to cross the finishing line since my mission stretches over a week and I guessed nobody could tell why I smiled to myself finally at the end.  At last I completed.  This time round it was back to normal and I was alone after collecting the finisher medal and tee.  I felt a sense of accomplishment too though it would have been greater if it also resulted in drawing folks to contribute to the cause.  But I’ve done what I can.  If this results in one dollar more to the contribution, then I guess I’ll still be happy for I have done what I can and what I think I should.  https://www.simplygiving.com/runforthekids

As in life, you can only do your part, influence if you can, but that’s about it.  As when I started running and blogging, I mentioned if by sharing, I could perhaps influence someone or inspire then I would be more than happy.  In the process, I admit I have been inspired in turn by the friends I made like those mentioned above and in past posts too.