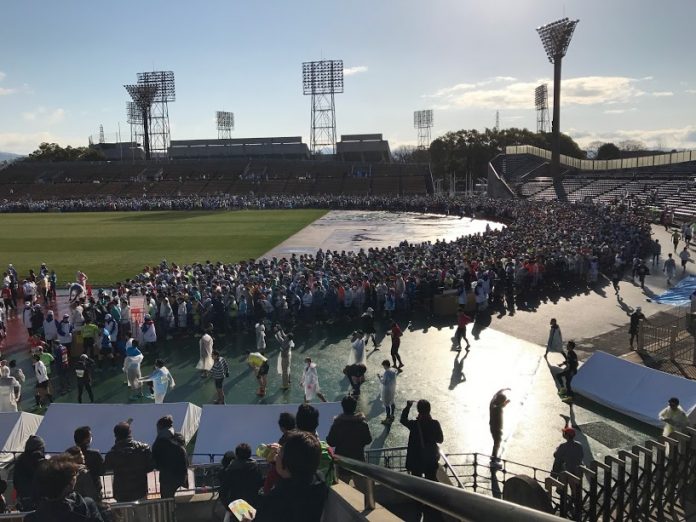 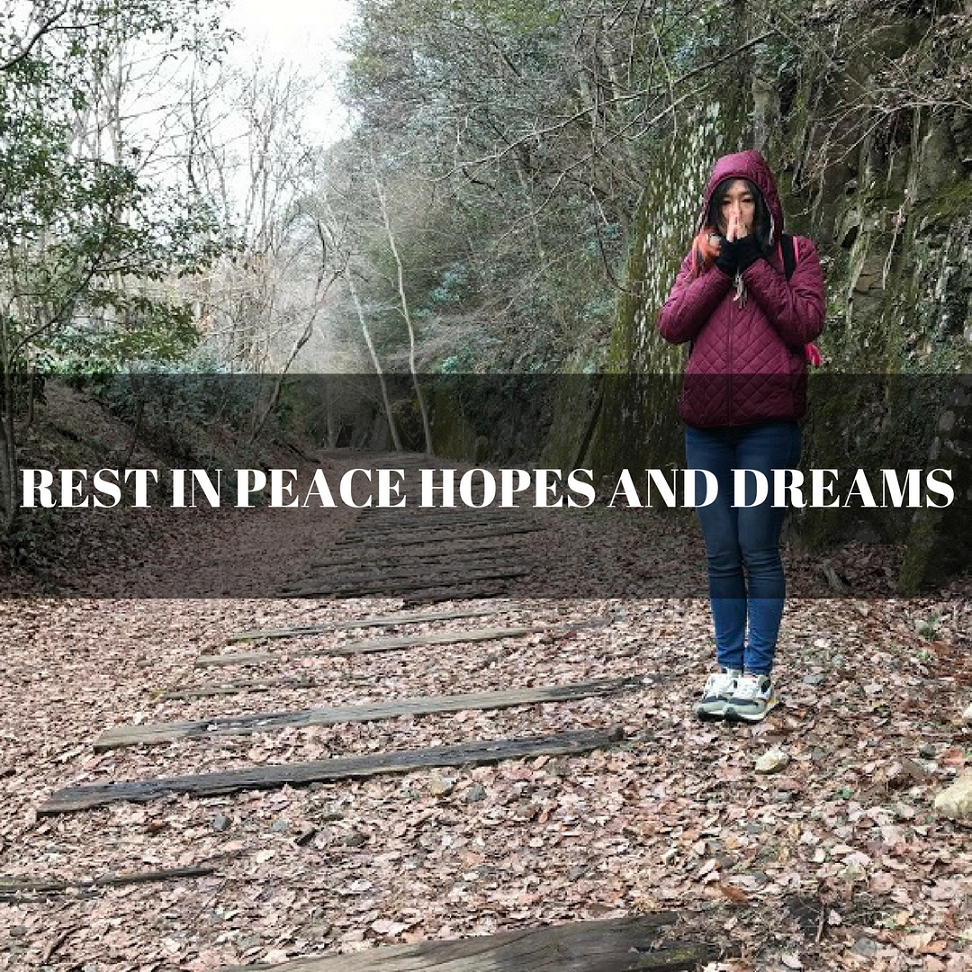 Okay, I admit I was still excited lah. I mean people told me that running in cold weather – confirm PB. And also it would be my first trip to Japan. And people have also said how much they love Japan. So, although disappointed about Tokyo, I was still pretty excited.

Weird injuries and health issues also forced me to take a break from running. After my Cyberjaya Twincity win in mid January, I had to stop running. Only after the CNY holidays did I start running again – to be exact the 7th of February 2017. I had 12 days! I can do this! But, after a week of starting to run, i instant fell sick. But okay lah right, kind of tapering already. So a lot less excited, I thought of even giving this race a miss. But, I paid so much for the registration fee, 680 ringgit i think – damn bloody expensive okay. So, I guess i better damn run it no matter what. Walk also better walk and eat everything on the course and make my 680 bucks worth it!

Things NOT to do before your overseas marathon.

We touched down in Osaka on Friday morning and initially wanted to do a test run, but it rained the moment we stepped out from our airbnb. So the plan was to tryout the next morning instead. 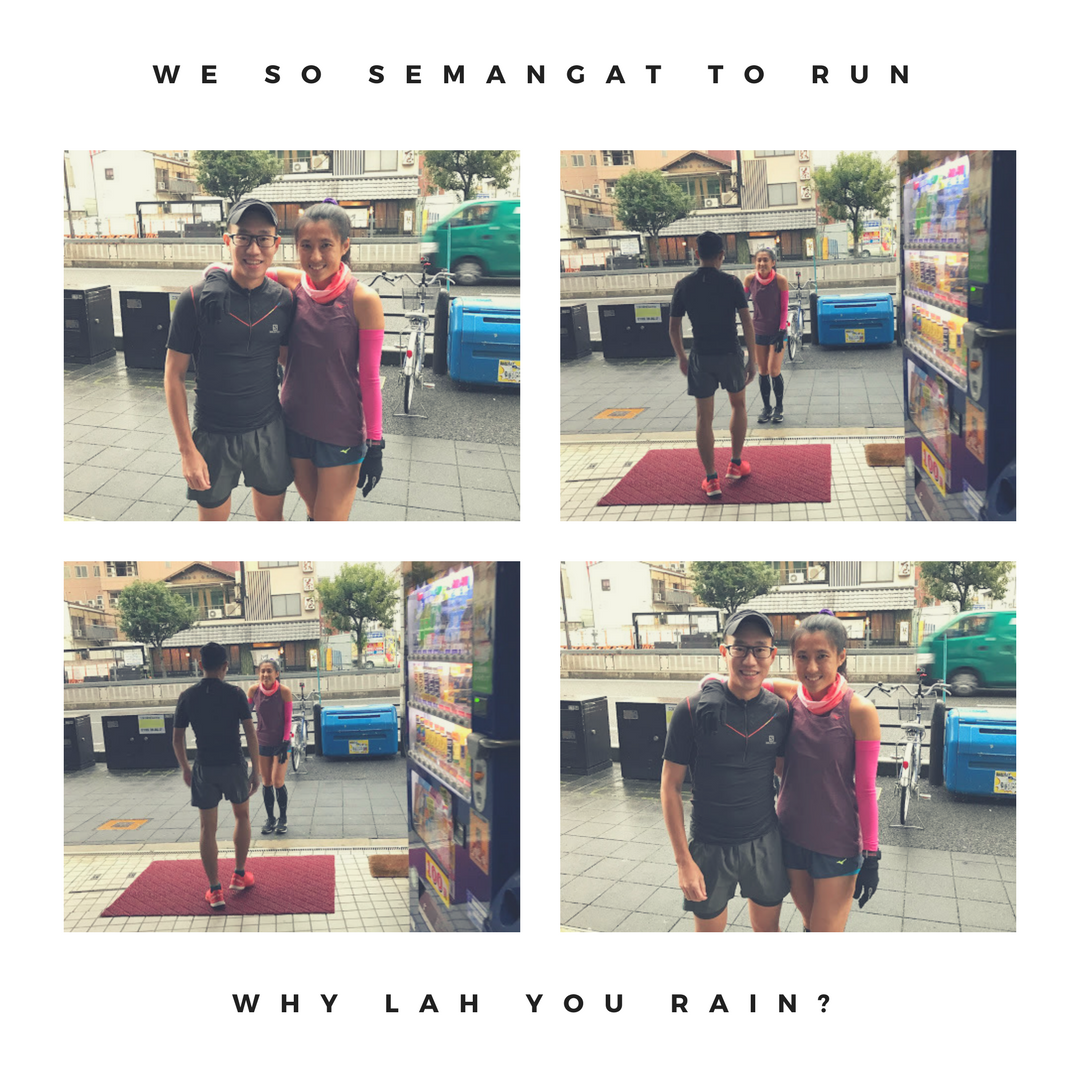 So, EAT – probably walked almost the whole Osaka (okaylah i’m exaggerating). But seriously, walked almost 8 hours in total that kind. Came back to the airbnb at night and my knee totally died. My left knee couldn’t bend (this one not exaggerating). I woke up the next day, still couldn’t bend. It was till the extent that I thought I needed to DNS Kyoto Marathon the next day. So, no test run again. My best bet was to just rest it out and hope for the best on Sunday slash pray for a miracle. I must have been a pretty good person lah in my past life (because I’m not that great in this one) because I did get some miracle and my knee was so much better by nightfall. But it really did seem like the world was against me running Kyoto.

Thankfully for me I have Mr. Lim who is my manager, makeshift physiotherapist, slave? to massage my legs. Teehee! 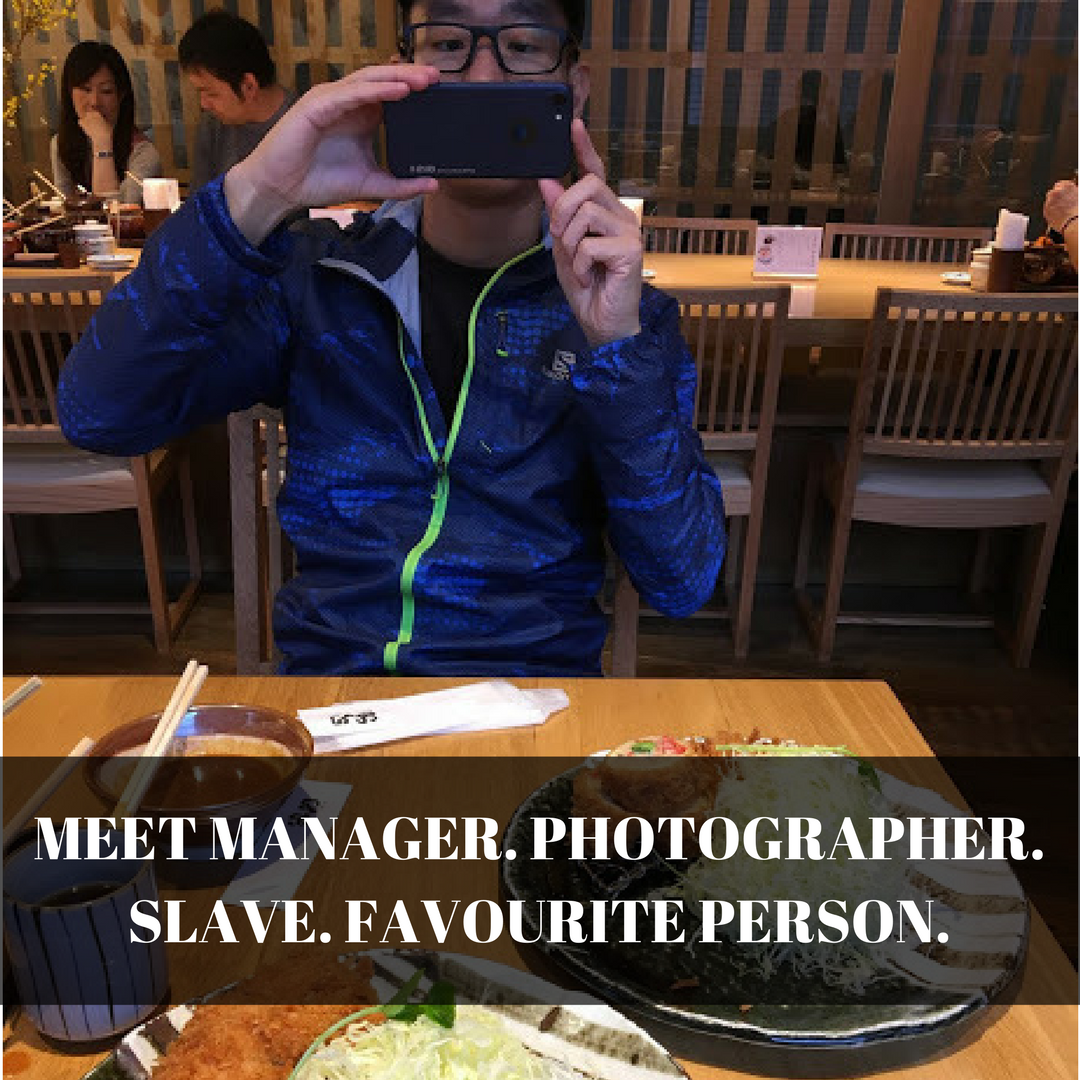 I don’t know why I didn’t check the weather before heading out – I think normal people do that kinda thing. And I don’t know why I decided shorts should be fine (and I don’t deal with the cold very well). And, it was a blistering 2 degrees. I died. Getting to the start line itself I was super regretting what I wore. 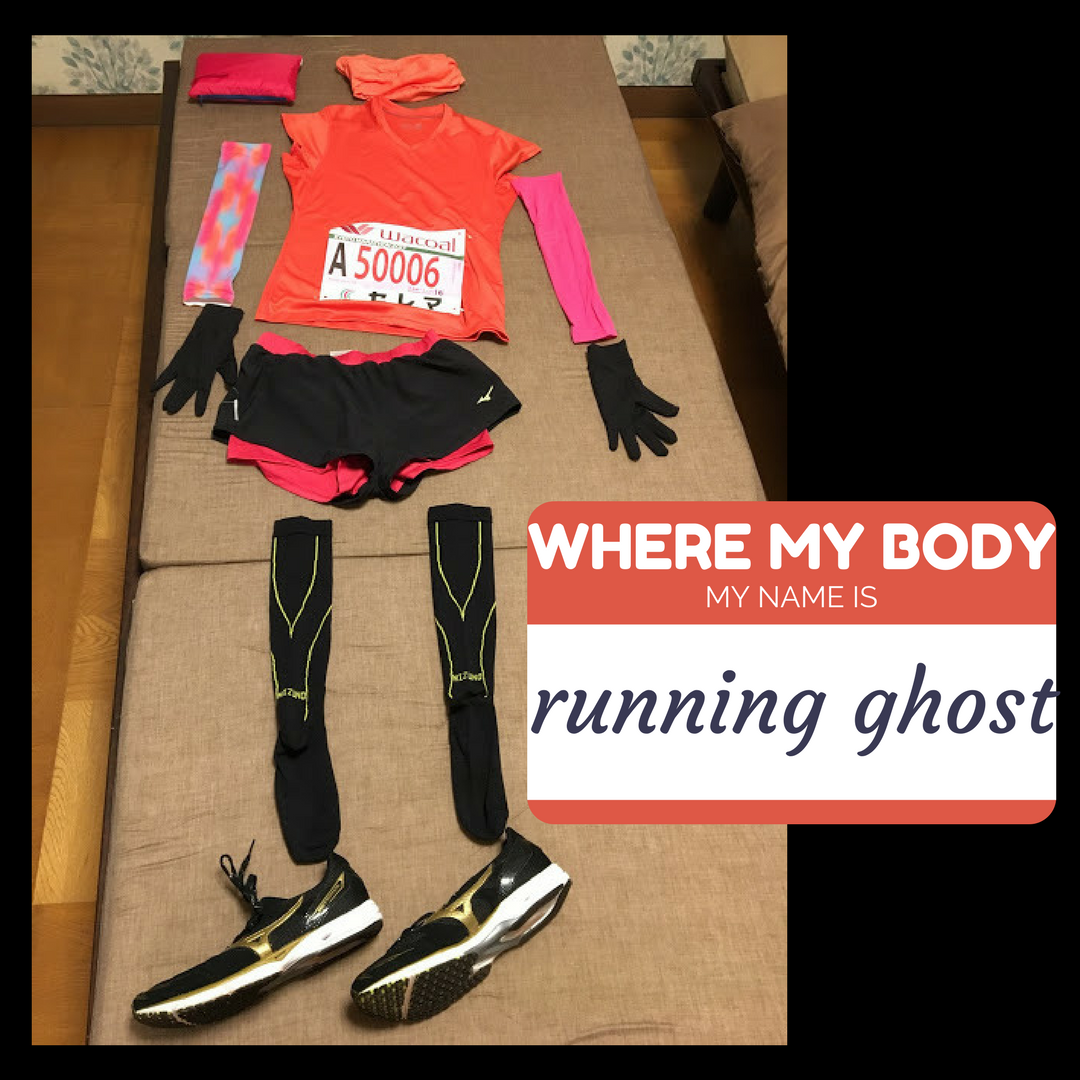 Actually initially, the plan was to wear long tights, maybe a thin jacket. But then,  I watched a video of Soh Rui Yoong running a Japan race the week before. He was wearing a singlet, shorts, arm warmers and gloves. So naturally I thought, whoah this is what I should wear too. Elite can’t go wrong right? Yea, I probably was one of the very little people just looking like an elite at the start line.  Looks only LOL! But I really did feel like quite stupid to be wearing that. So I guess that’s another lesson learnt – check the weather forecast! Don’t know why I thought it would be like Genting weather slash 16 – 17 degrees!

Flagoff! I ran the first kilometre with William before he ditched me! I guess I was really surprised by the field of runners. I mean Pikachu was running faster than me. Aunties probably almost twice my age were running in front of me. I felt – slow and unfit! 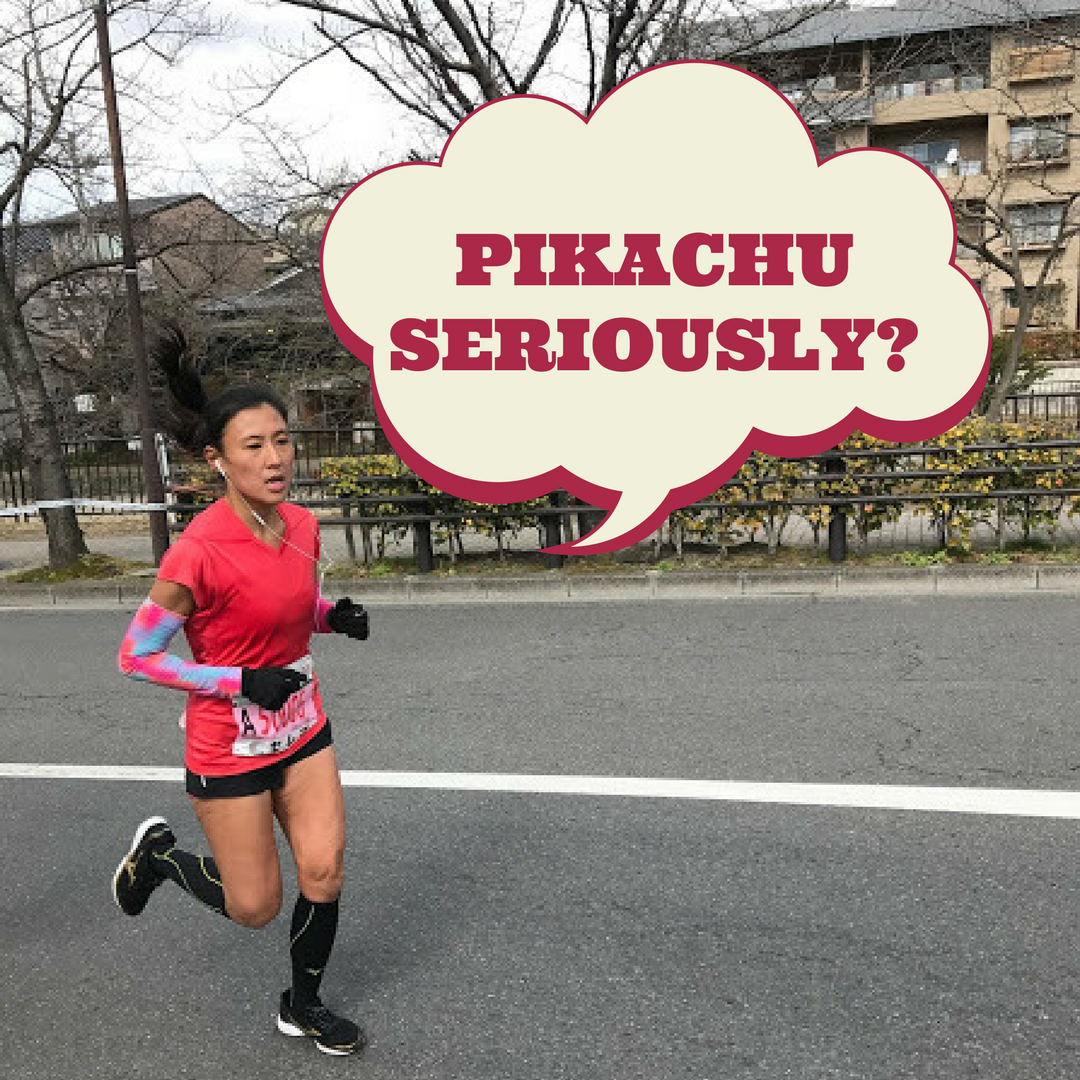 I think quite ridiculous things when I run. Maybe it’s all that time of being alone! When Pikachu passed me I was like whoah, wad seriously even Pikachu is faster than me! But I turned back and saw other Pokemon behind me. So I thought to myself, it’s okay, Pikachu is a special Pokemon that’s why so fast. I’m still faster than normal Pokemon! Okay noone cares but me!

I was really impressed by the entire Kyoto Marathon. The views were beautiful! The favourite person took a few shots along the route,. Lucky I carried no phone if not I may have stopped to take some photos too. So pretty! Not that I’ve done any pretty marathons before lah but hands down the prettiest marathon I’ve ran. The water stations were impressive – even got plenty of food – Chocolate bread, Vanilla bread, Custard bread, Red Bean bread – you name it! How they handle the traffic, pedestrian crossings were also impressive! I’ve not seen it done before. And the supporters from start to end was amazing!

But I guess it’s the course that made it easy for supporters to come out and cheer! I mean in Standard Chartered KL Marathon, how do people even get on the DUKE highway to cheer runners on!?!? HAHA! 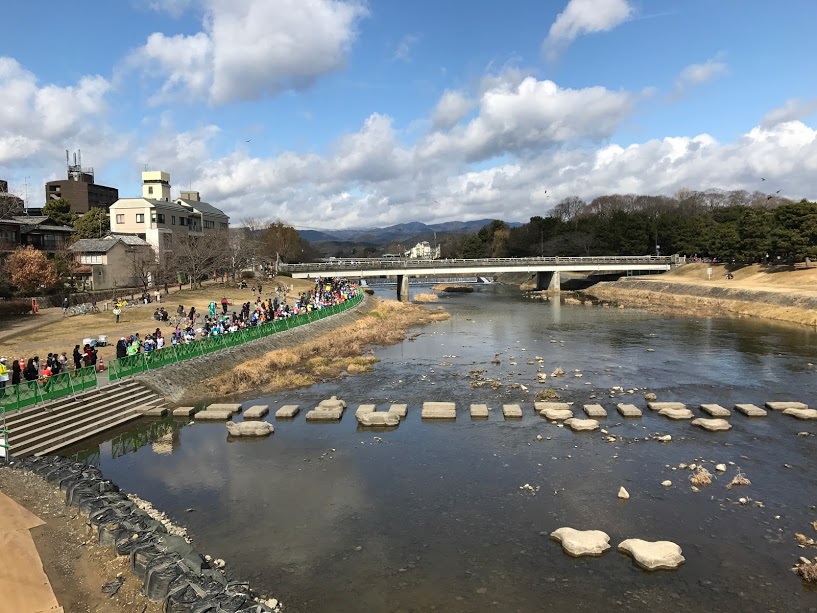 Anyways the course is slightly hilly in the initial 15km, then pretty much flat. You run along the famous Kyoto riverbanks, past temples and basically pretty much the whole Kyoto.

The first 10km was okay for me. The sun was starting to come out. I was feeling quite warm and nice. I discarded my neck buff. I was looking for a volunteer to discard my arm sleeves as well – but THANKFULLY i didn’t. Suddenly 13km ish onwards – it was, man where is my sun? The sun disappeared! Felt like temperatures were dropping again. I started to feel cold again. My knees started to hurt – both knees! My quads started to numb. At 20km point I felt like I was dying already.

I saw Mr. Lim at the 20km point and i continued to push on. By 28km, entering the Kyoto Botanical Gardens, I felt like I kind of hit the wall. It was one of those what am I doing moments. It was one of those I felt like okay-lah I did quite a good long run – sub 5 minute pace, my knees were hurting, I already did a good job, maybe I should stop and walk moments. But I guess it’s really one of those low points everyone experiences when they do something like this. It was really a suffering remaining 14km for me to the finish line. It was really me against my thoughts and the temptation to just give up. But I also did think, man if I stopped, then what? I had no money no phone, and probably freeze to death walking back to the finish line. So I guess, I just kept moving. And favourite person always tells me this.

everyone is hurting. everyone is in pain. it’s who handles the pain better that will come out on top! 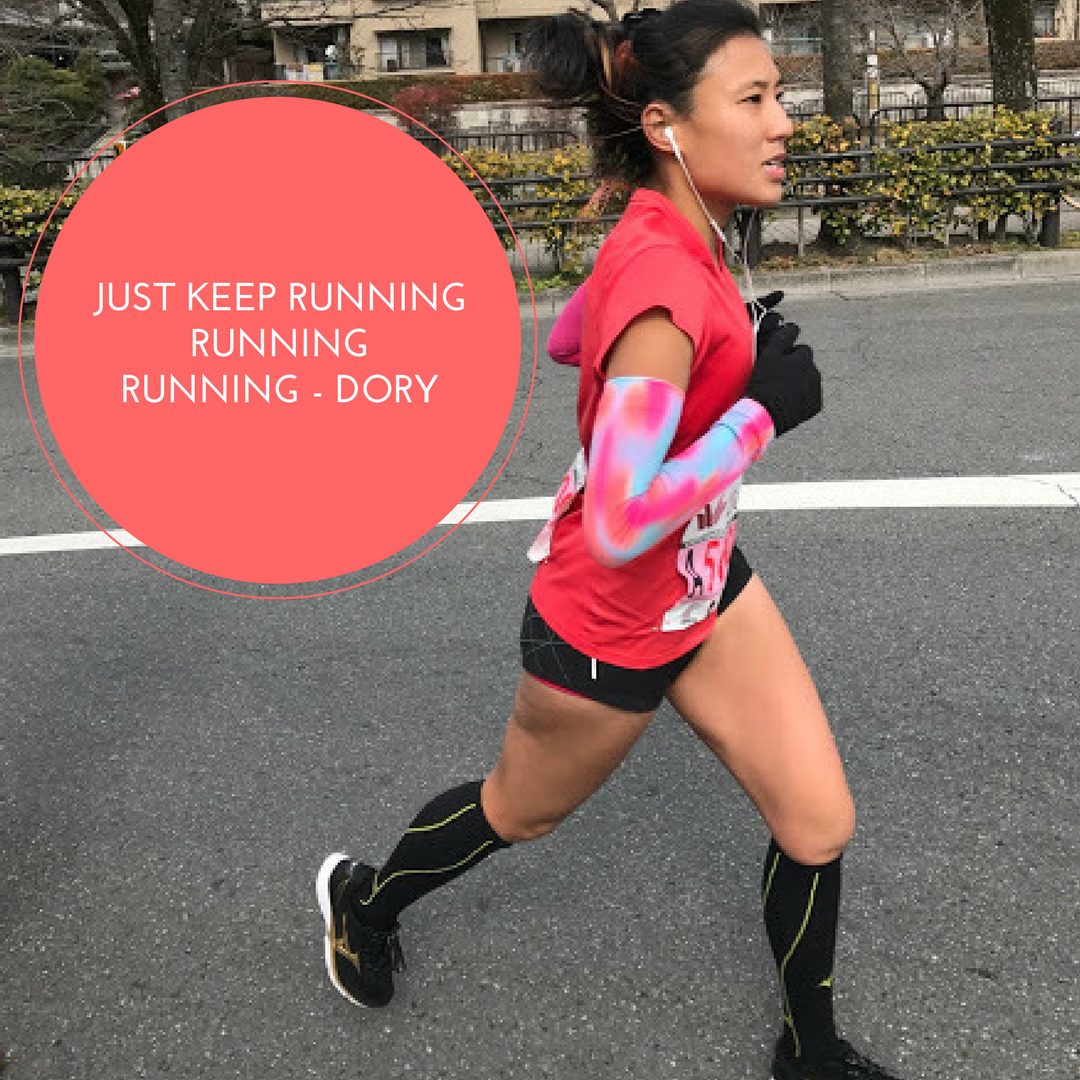 So, that’s what normally keeps me going! Think I smiled abit here because I saw favourite person! It’s always nice to have support when running a tough marathon! It’s these little things that keeps you moving!

But when I finished, man, I was so overjoyed. It was a PB for me! It wasn’t my target – but nevertheless a PB! Looking back at my splits, I slowed down at the final 5km but thankfully still maintained a sub 5 minute pace. 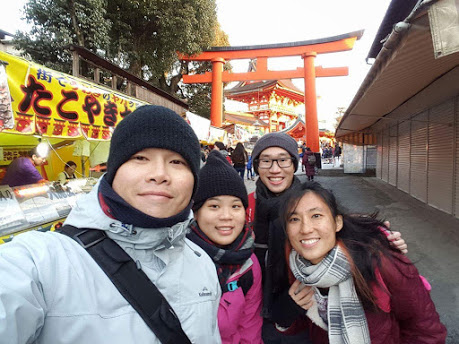 The best part was of course having favourite person Mr. Lim and my best friend Steph waiting at the finish line for me. That really was the best part. I look forward to many more moments like this.

So favourite person and best friend and bestfriend’s boyfriend waited for me for almost 4 hours whilst I got to see the whole of Kyoto. So naturally, it was their turn to see Kyoto. Favourite person wanted to do the Fuhimi-Inari hike which was an 8km hike up and down. So I pocketed a 50km that day and unofficially became an ultramarathoner.

The thanks of course goes out to the people who have supported me in my running – Mizuno, Garmin, JustRunLah! and Lifeline-ID. Dynamique has also helped me with my weird pains and injuries. And as I’ve always said, my run accomplishments are always as much mine as favourite person’s. Thanks for always pushing me, and treating my like a princess! And always to my family (Cousin and Uncle included) – their neverending patience and support for me has been extraordinary! 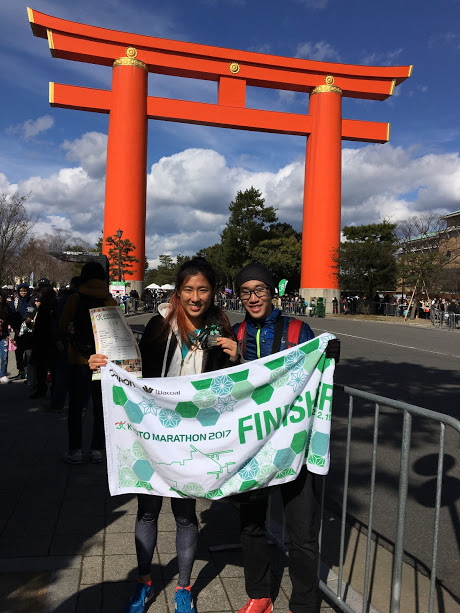