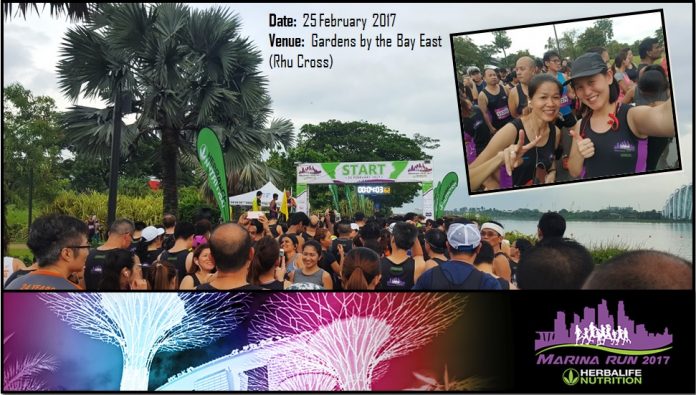 A big thank you to the organiser 42 Race for the slot – I was pretty excited as this was my first time joining the Marina Run. Before the run, I read about previous editions and noticed that interestingly, Marina Run usually took place after or during a heavy downpour almost every year – and it happened again this year!

There were the usual pop-up booths selling sports goods at the REPC site but what got my attention were the running route map boards. The 10 km route map board shows a route that I have never run before and I am excited about the upcoming race. 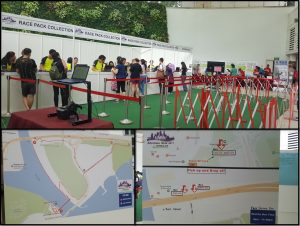 [Photo of the REPC Site]

There was really nothing much in the race pack, with the typical discount flyers, event tee from Brooks and a race tag. It was pretty disappointing for a race that cost SGD60. 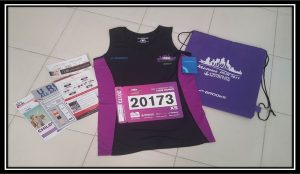 [Photo of the Race Pack Goodies]

As with most runs held at the Gardens by the Bay (East), there was a free shuttle service between Stadium MRT Station and the event site. It was still raining heavily when I arrived at Stadium MRT and the waiting time for the shuttle was around 20 minutes. Thankfully there were no strong winds otherwise it would have been a dreadful and cold wait. While waiting, there was an announcement via Facebook stating that the 5km flag-off timing would be delayed for half an hour, but nothing was mentioned regarding the 10 km category. I prayed that my race would not be cancelled. 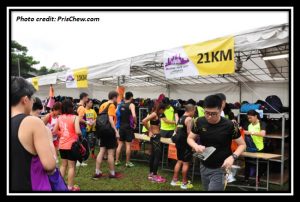 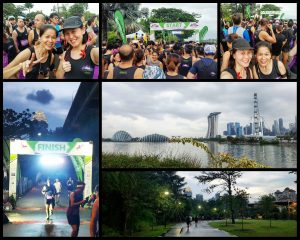 Suggested improvement: The organisers can consider sending SMS or text messages to participants regarding delays, in addition to announcements made over the PA system. This would also cater to people who have not reached the race site or who are away from the main stage area, listening to their own music etc.

We were flagged off at 1812hrs and you could see everybody starting cautiously as the pavement was still wet. The first 3 km were pretty much the same as the other races at Gardens by the Bay (East). The challenging part of the race was from Gardens by the Bay (East) towards the Marina Barrage up the slopes. I was pretty happy to set a personal record according to my STRAVA, for the Marina Barrage Loop (where I have been training during my weekly runs).  From the fourth kilometre, we had to run behind the Marina Bay Golf Course towards East Coast Park (ECP).  Though it wasn’t very scenic, it was a pleasant change. It was pretty flat from that point onwards.  Route markers were clearly located and easily spotted.

Suggested improvements for the race route (which otherwise was a well-planned route): 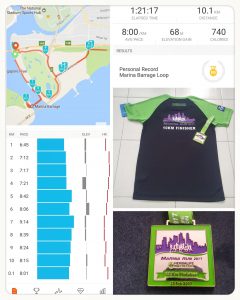 Crossing the Finish line should be a happy moment but that joy was short-lived when we had to collect our runner entitlements.  I was greeted by a bottleneck as everyone was trying in vain to avoid the muddy field. No one was spared from having muddy shoes! Even after collecting the entitlements, it was a challenge getting out of the muddy area. Our shoes looked as though we have just completed the Spartan race.

Bag collection was also dreadful as all of us had to stand on the muddy grounds even though it was fast. There were even mud stains on my bag after I collected it back!

Suggested improvement: Consider installing a wooden plank base when setting up tents in open fields for future races. This would minimise participants’ contact with muddy fields and would also make the volunteers’ job more pleasant.

Overall it was a good run event but there are things that I thought the organiser could have done better to improve the post-race experience. While the weather is understandably unpredictable, the organisers could have been more prepared for muddy grounds given that the same scenario happened in previous years.

Anyway, I’m still happy to be given the opportunity to experience this run event and hope that participants next year won’t experience muddy grounds! Till my next review, stay fit and fabulous everyone!