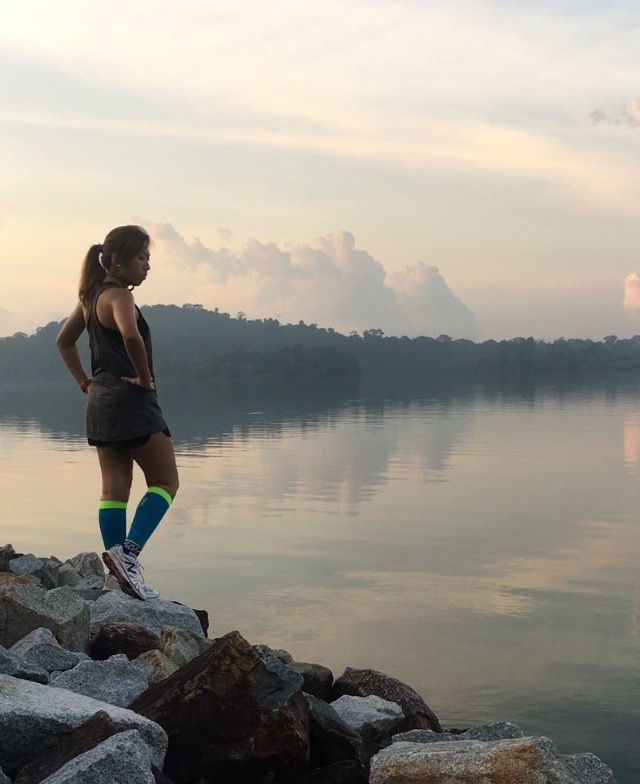 The 42race virtual run is a interesting concept actually when at first I don’t really like the idea of paying to run myself anywhere and time to clock the mileage. I think organizer just had to pay a fee for programmer to create the website and a minimal cost to manage a website for the participants to submit their runs, posting of medals to the participants and answering enquiries, because it’s a virtual run the organizer do nothing much actually, they don’t need to plan much of the logistics as runners plan their own route, take care of their own hydration and safety, print their own bibs but I think nobody wear their bibs to run because who wear bibs for a own run? 😂 But they designed the bib till quite nice also lah, got effort.

So practically, to cut long things short, it means they are earning many lwee when I feel that they are doing “nothing much”.

See, so average 1000 plus people sign up x $10 per run x 12 months x 12 those wu eh bo eh run like unicorn run, valentines run because like almost 1 theme run every month etc = $$$$$$$$) I hope I can also be so creative and clever to come up with something so innovative to strike rich 😆 Somemore they very evil, think I will most probably sign up for all their 12 months of 21Day Challenge. They come up with awards to say nicely is to encourage, say not nicely is to lure people like me to sign up 😂

But its a $9.90, most importantly comes with so much of motivation for me to run and then eat more and run and then eat more and run and comes along with a medal of the Capricorn horoscope for this month of January, guess for the rest of the year the medal/badge will be in the horoscopes. I think the motivation to eat is greater than running as I gain weight though I run more distance, 4kg in one month to be exact 😱 Because I know that I need to run more, I must eat more, but I’m just not eating in the correct way. Confirm can’t blame CNY because I seriously haven’t even eat a single piece of Bak Kwa or pineapple tart or any single piece of CNY biscuits 😭 I think the main aim of signing this up is to motivates me to clock mileage to train up for my full marathon in February and May. They say that a habit is form in 21 days, so that running will become a habit to people who doesn’t run, so this 21 days challenge seriously do encourages and motivates people to keep on running with a medal. Although each 21Day Challenge is just $9.90, but it’s every month! If I’m signing up every month it means for one year I’m paying them about $120! 😱 Plus there are other running events such as New Year Resolution Run and many other runs from 42race almost every run and if many other runners including me really sign up so much for so many of their runs, they are really going to earn a lot at what I think that they are doing “nothing much”.

The website somehow works similar to Facebook and Instagram, quite easy to use. We upload a screenshot of our running routes and it can be accompanied with a journal entry and a photo if we want. We can see posts of runs like in Facebook feeds from all other runners but one thing is we don’t have privacy this way. 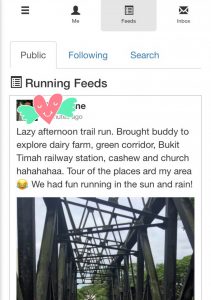 Some runners are very secretive in their runnings, they don’t like people to know their secret running pace or secret training grounds is where. I also rarely run at the same route scared got kidnapper or stalker. I very imaginative will think a lot, but there’s all sorts of people in the world though sometimes we just wants it be to rainbows and butterflies, better be safe than sorry because news got report in some where on Earth 80 year old granny also tio rape, there’s all sorts of people around so we female runners have to be careful though Singapore is quite safe, “Low crime dosent mean no crime” is something many many years ago. But I think we can also just capture our Garmin or other watch that show distance and date and time or capture a photo of the thread mill with date and time. We can also follow other runners like in Instagram

I need the mileage as I have a full marathon next month. But I seriously don’t know how am I going to roll myself to the finishing line 😭

Overall I enjoyed my 21Day Challenge run for the month of January, mostly running in the East area of Singapore this month enjoying beautiful scenery and greenery, Singapore though is small but really have many beautiful places, thank you Mr LKY. I also like the exploring of different routes and also running with friends having chit chat runs also enjoys nice food after the run 😊