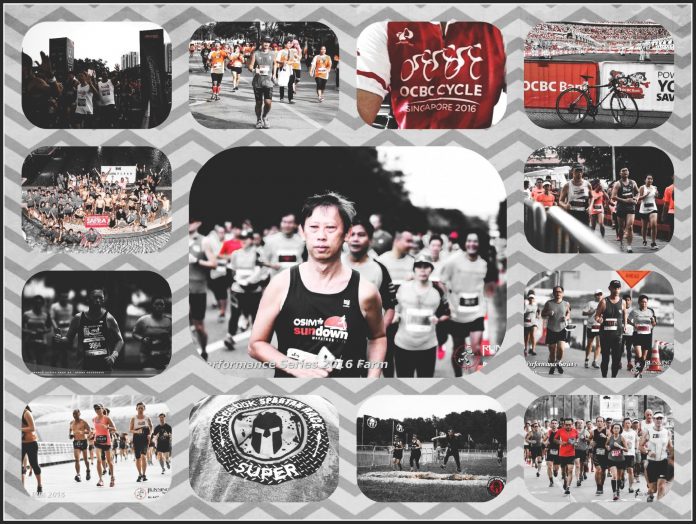 It has been two years in a flash.  Starting late in 2014, I ran to release steam, like from an overheated engine.  Forex trading has its hectic and heart-rending moments as most beginner traders might testify to.  Running was one form of release for me.

The distance I covered initially was a mere 3.5 km.  2015, I started to run races.  After completing three 10 km races in 3 months, I thought I was ready for a half marathon and signed up for one.  The half marathon took place in 5 months from my first race !  All I went on was just pure will power and the romantic notion of being a naive runner like the legendary but fictitious Forrest Gump.  So I ran the Marina Half Marathon without knowing anything about replenishing glycogen and calories through energy gel, or even lubricants for chafing of the body parts.   I learnt my lessons the hard way.

But that wasn’t the end.  I decided that it was time for a full marathon.  Another 5 months after, I completed my first full marathon and that PB remains my PB though I continued to run another 2 full marathons among other races.

At about the same time, I started to use Facebook regularly.  My group of FB friends then were largely my ex-colleagues and after a few posts, it was obvious that they don’t share my new found hobby.  Most were younger than me and had ‘better’ things to do.  Mostly to do with work, food, travels and relationship, probably in that order too.  I guess I am beyond that for various reasons.

Luckily I am self-driven so the lack of ‘likes’ or comments didn’t affect me.    Rest of the family members thought I was wasting my time and energy (and money) with all the races. Only my younger son showed some passion for the active life.   We ran one race and one vertical marathon.  He had moved on to do gym fitness and weights.  The only marathoner I knew then was my brother-in-law.  I was encouraged by his accomplishment in completing a number of marathons by then, while he was still holding a busy career job and everything.  He is my initial real life inspiration.

Back to the present, I started the year 2016 with some crazy goals.  To do another full marathon in another 5 months despite the loss of toe nails and suffering from Plantar Fasciitis.  To continue with Spartan Super although I had felt worn out after doing the Spartan Sprint.   To complete two half marathons one after another weekend.  To keep up with my 24 challenges of 2015.  This meant on average 2 races per month.  All, I did accomplish and a bit more.

By then too, I had two close, largely virtual, running pals: Francis and SY.   They were faster runners than me so we may meet at beginning of the race and then finished off separately.  There were also two young friends I made while volunteering, who also continued to give moral support for my running efforts.  I started Kenjoe Running group although that has very limited success because my FB friends were still largely busy working who still have better things to do (… I think).   I was reminded many times that I could promote the site if I pay for it.  Erm…not necessary.  I just want to write to myself oftentimes to remind and to track progress of my ‘training’.  There is indeed a paradigm shift in thinking.  It is not really exercises anymore.  It is training.  Gives it some focus, some meaning, to accomplish something in the future.

I continued with the ‘high’ volume of races and it came to 28 for the year 2016, surpassing last year’s, with the last virtual challenge done today – a short 5 km.  This had been a mixed year, characterized by more injuries than anything else.  Still there was a lot to be thankful for.  Here are my rather random thoughts/reflection after running for over two years with some attempts at cycling and swimming. 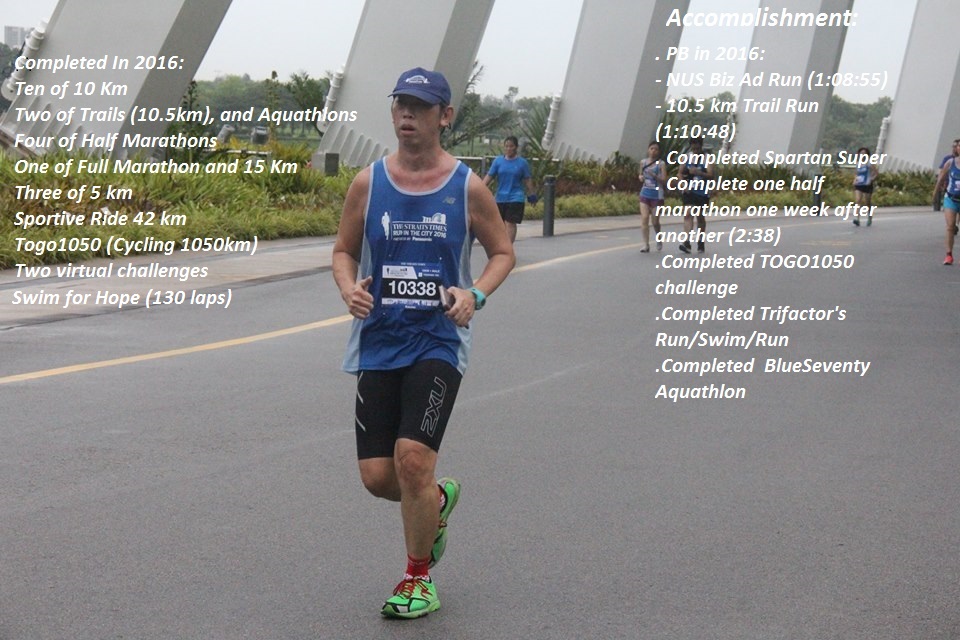 It will not be always fair weather for running as I learnt this year, both literally and figuratively.  It’s how you made lemonade out of lemons.  It’s how you see a glass half full instead of half empty.  So here’s to all runners and future runners : have another great year ahead.  May the Running (force) be with you.  As usual run happy and run safe.  On a closing note, as running is always a good metaphor for living, replace some of the above with that word and you get life’s lessons too.  Happy New Year 2017 too.