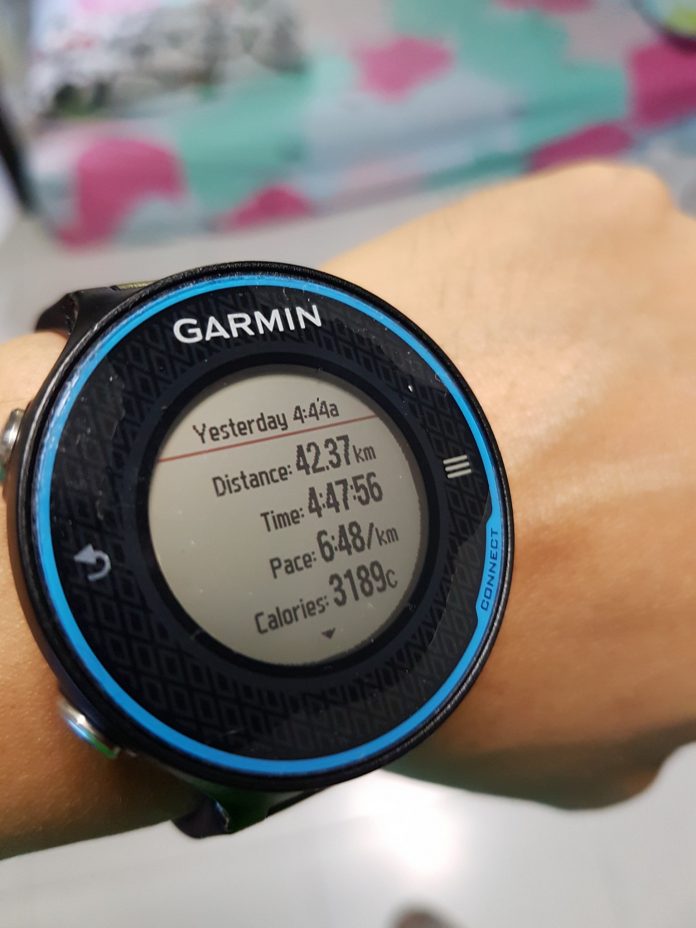 MY RACE JOURNEY – It was a year-long mind preparation as I thought of taking part again on what I considered to be the ultimate event in my running journey to close the year 2016. A newbie in the running scene who can hardly finish a 4 kilometer set target a couple of years back, I just ran my third full marathon and this is my second year participating in this annual Standard Chartered Marathon Singapore celebrating its 15th year.

🔹  Digital Queue. I was quite hesitant to register for another full marathon after my 2 prevoius marathon experiences. They were all awful with plenty of unpleasant encounters making me almost cry while running, cramped and blistered all over, felt like DNF-ing and almost crawled my way to the finish. Until an ad by Marathon Sg regarding an online challenge, which made me so curious about and excited at the same time. It is a 7 day challenge whereby a specific task is given each day and all you need to do is to post the challenge on your social media accounts e.g. facebook, instagram and twitter. Every like and share accounts to an equivalent score and about 100 participants with the most accumulated points after the 7 day period were given free race entries with special prizes for the top 10. I was so thrilled that in contrary to my claimed introvert self, I flooded my social media accounts with all the needed posts to get to the top 100 spot. Fortunate enough, I bagged the 70+ place and that’s it, no more turning back, no more contemplating, I’m in for another 42km challenge for free with a limited edition SCMS shirt by Brooks.

🔹  Warm Up Run. There was an official warm up run held at the Sportshub few months back but I was taking part in the ASICS City Relay happening in the evening of that same day so I decided to drop it.

🔹  Training. I had so much anxiety as to whether I would improve my timing this time running my 3rd full marathon. Previously, I didn’t really train intensively enough. Furthermore, the longest run I have ever done before in preparation (if you call it preparation) for SCMS2015 were the 21 km races. After a 5:45 finish for my maiden full marathon, I learned that I needed to put in much more effort if I really wanted to get good results.

Aimed for a better timing for Sundown Marathon 2016 but I did no better training. I stuck on to a similar routine  so it was never a mystery to me why I ended up with the same bad timing of 05:30.

I am just thankful that somehow I managed to fit in to a group of people of the same interest with genuine passion to continue improve themselves as runners. On top of the Mizuno CBD group where I first picked up so much useful techniques and pieces of advise from prime coach Lexus, I also met  a group of Filipino runners whom I joined in consistently for long runs designed mainly for SCMS 2016. I feel running with a group greatly helps in the overall development of a runner.

Few months before SCMS, whilst working on shifts, my after work days has become a bit tight. Monday evenings is for my spiritual family, Wednesday evening is my Mizuno CBD/Pinoy-Sg alternate speed and endurance training and then one of the weekends is my long run. Recently, me and wife made Tuesday evenings a special run/workout bonding together with our little 6 year old miss biking as we run at a park nearby our block.

🔹  REPC. Race pack collection was smooth. I went to collect mine on the first evening at the race expo. There were designated queues for every category with a lot of counters to accommodate the large crowd making race pack collection a not so dreaded experience.

🔹  Race Eve. My colleagues planned an early Christmas party and they all decided to gather on 3rd December, yes a day before the race when I should be resting. In fact I considered not showing up because it is the “main event” the next day thinking that it is a party -there’ll be food and drinks (that includes alcohol) and definitely will end late. Instead, I suggested to start early as 3PM so we can have all the needed time socializing and catching up. Understanding my colleagues and friends were, they agreed on to my suggestion so I was able to give myself up to 8PM only. What happened next? I ended up saying my good bye at 9PM+ with a bottle of beer consumed with my belly so full of whatever that was brought for potluck and reached home about 10PM. My running buddies retired as early as 7pm while me stayed out til late and dropped the Discipline in the 3 D’s.