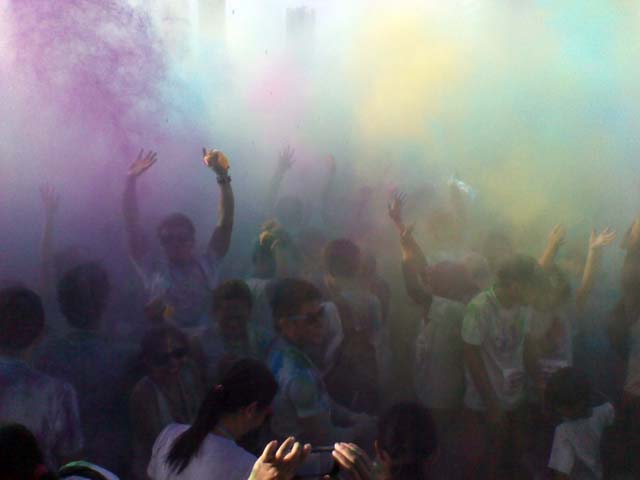 2017 PROMISES to be a banner year for Color Manila Run as the Philippines’ fastest growing and most colorful footrace series enters its fifth season of truly bringing the fun in fun runs.  Color Manila founder and President Jay Em recently bared their calendar of events for next year beginning with the franchise cornerstone Color Manila Run 5 on January 8, 2017 at the SM Mall of Asia grounds in Pasay City.

Runners of all skill levels can choose between three, five, 10 and 21-kilometer distance categories. Just like in all events, this is non-competitive in nature with the ultimate goal of providing participants with a big dose of fun and positive vibes to begin the New Year.

A big come on for participants is the well-designed race kit that includes a singlet, race bib, tote bag, sunglasses and other freebies from sponsors.  All finishers will receive a medal.

Online registration for the Color Manila Run is now available via www.trackoval.net with payments made via credit card.  Those without credit cards may purchase prepaid cards at all branches of Runnr or visit the nearest SM Tickets outlet and then logging on to www.colormanilarun.com for complete details and information.

Since the first Color Manila Run was staged in January, 2013 at the Bonifacio Global City in Taguig City, the event’s attendance has grown exponentially with over 100,000 total registrants in the 2016 season alone.  The event has spread itself beyond Metro Manila by staging similar fun runs in Cebu, Davao, Dagupan, Clark and Vigan and other major cities.

The positive feedback has assured a return engagement in all the cities visited but the big news is that the event will soon go international with Color Manila Runs in the United Arab Emirates and the United States where there are big concentrations of overseas Filipinos.  The international venues will be joined by other new locations in Tanay, Boracay, Bohol, Cagayan de Oro and a few to be named later.

Aside from the original Color Manila Run, fans of the series can look forward to their other offerings throughout the year like the Color Manila Run Challenge which adds a various obstacles along the route.  There is also the Black Light Run done in the evening, the Glitter Run wherein glitters are mixed with the color powders and the Costume Run which is usually held around Halloween.

Truly, the Color Manila Run has come a long way since Em hatched the idea to now Color Manila Vice President Justin Cordero while snacking at a popular pastry shop in the middle of 2012.  Both admitted they were worried at first because the novelty might wear off soon but fast forward to today, the concept run has evolved into a community of its own with runners coming back regularly to sign up for events not just in Metro Manila but even in the provinces.

The team’s perseverance and industry was eventually recognized and rewarded by the Asia Sports Industry Awards earlier this year in Bangkok were they won as Best Mass Participation Event of the Year.  Color Manila also tied up with the Tourism Promotions Board and the Department of Tourism adding the fun run to the official calendar aimed at enticing more tourists to visit the country.

“The fun actually begins upon crossing the finish line,” said Em.  “We always give runners the complete experience with DJs playing music, live bands and a lot of side events.”

For sure, Color Manila Run has survived the test and is here to stay.  Runners better make their move soon and sign up before all slots are filled up.