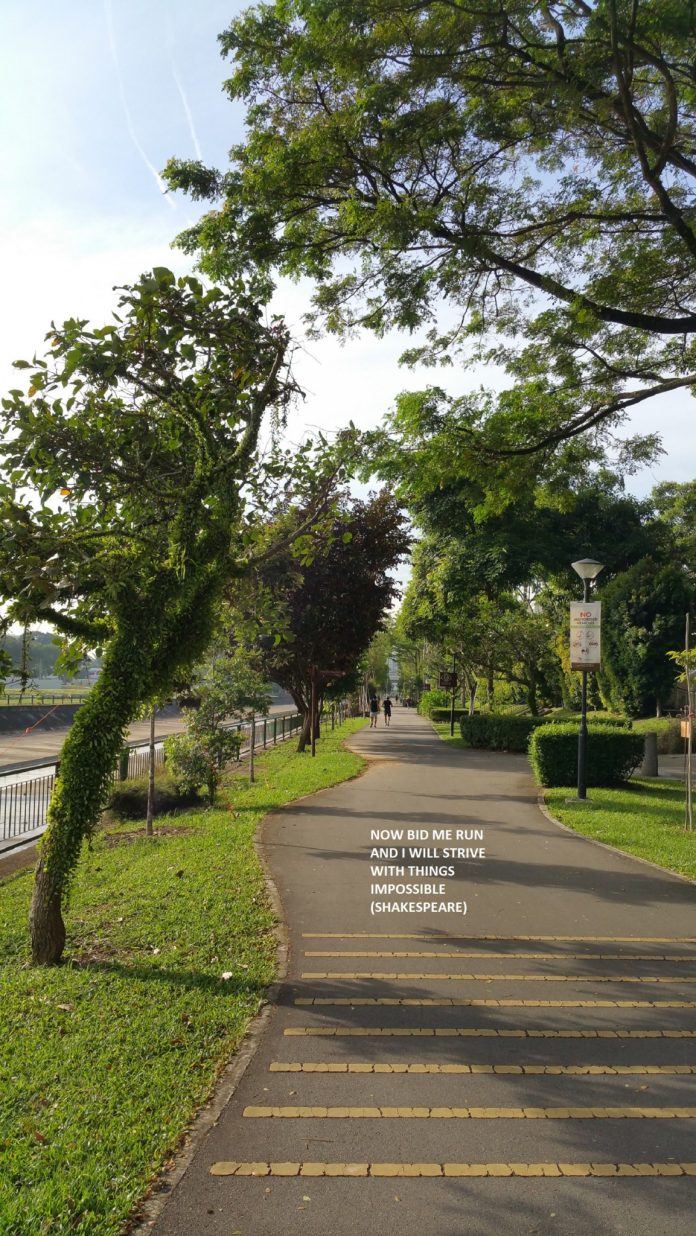 Having done quite a fair bit of running races (regular readers may remember my race reviews), I’ve decided to try swimming and cycling a bit more the later half of this year.  Also, I had probably ‘over’ run my limits, as I was still recovering from Plantar Fasciitis (PF) the past few months.  I thought too, that cross-training with these variations would help.

Mid Sep, I had decided to take on a 9 week challenge to ride 1050 km (Togo1050) within 9 weeks.   This was organized by TOGO PARTS, the final challenge for 2016 to celebrate its 15th anniversary.  I had signed up and diligently cycled, working out a schedule, and landed up going for rides almost every night in October.  The distance was tracked using Strava apps.

Early October I went for my OCBC Sportive Ride and did much faster than last year though I had a fall and hurt my wrist.  I ignored the pain and continued my exercise regime.  I stacked up on swimming a wee-bit and then went for the Swim for Hope organized by SAFRA.  However this time, I didn’t try and do an ultra but signed up for just two sessions, one of them with my good pal Francis Tan.  I completed 130 laps (130x50m) in total.  This was for charity and so I felt good about it.  I was sunburned but I got tanned too.   Glad that Francis could join this year,  except this year’s format was different, and there wasn’t any trophy awarded too, for any ultra swimmers.  He could have easily attained that as he is a great swimmer.

As of 2nd Nov,  I was on schedule and I remembered that I had another 189 km to complete.   I had been cycling between 10-30 km per night and targeted to complete a few days before 13th Nov.  So, on target – should receive a finisher cycling vest in December.

Beginning November, I felt good with the runs that I was doing, and found that I had recovered from my PF.  I wasn’t having those morning sole pains for past couple of days.  I drew the conclusion that some cycling (cross-train with other body muscles) helped in aiding recovery.   I was so glad that I shared this good news on FB with my friends – I am free from PF !

Unfortunately on 2nd Nov, just the following day, I decided to go for a morning ride in another stretch of the Park Connector.  I was looping and gaining confidence when disaster struck.  I went too fast and the bike hit a rough patch.  I felt myself flying and landed hard on my bottom.  Felt my tailbone hit the hard concrete tarmac, hard, real hard. I felt a snap, and intense pain shot up to my brain or was it my eyes ?  I remembered shutting my eyes hard as I registered the pain !

My body fell backwards to the ground by reflex somehow.  I couldn’t sit up as I felt my lower body muscles tightened in spasm.  For a brief moment, my thought was : did I injure my spine, was I paralyzed ?  The pain was INTENSE.  I wriggled my toes and thought I could feel them still.  But I couldn’t sit up.  It was a bit late in the morning.  After a momentary pause when I thought the world has stopped, a young man and an older woman walked towards me.  Are you alright ?  I quickly said yup, I was alright, feeling embarrassed that I could only answer them in that position.  I was waiting for myself to recover enough to sit up by myself.  But after a while, I realized I couldn’t control my body somehow.  I couldn’t sit up !

To go through those moments, and the next few days would require many more paragraphs.  I’d rather summarized thus.  Pain, limited movements for the following days ensued till today.  But the intensity had decreased.  Was referred to A&E Department of hospital in the end and diagnosed with fractured wrist (from the OCBC Sportive ride) and fractured L1, L2 of the lumbar region of the spine.  Miraculously I didn’t hit any major nerves.  I had a wrist cast on for a few days but removed it myself as I felt tingling in my fingers due to the tightness and I needed my hands for support during those days where movements were impeded.

I got an appointment for the spine specialist a week later and was supposed to see the wrist specialist at the same hospital the following Monday so that they could put on a fiber glass cast.  I thought it was an hassle so I cancelled the second appointment on Monday for the wrist.  For the spine fracture, the specialist said I needed to rest for at least 6 weeks for the vertebrae to heal.  They would require me to see them in another 3 weeks, so that they could take an x-ray and assess further.  No, it was not necessary to do any physiotherapy or rehabilitation – just stop exercise and rest.  Rehabilitation only after the bones healed in about 6 weeks.    The doctor must have thought after all, how active could a 53 year old man get ?

I needed to rest completely to let the bones heal.  Everybody said the same thing.  2 days after accident, I thought of the TOGO1050 challenge.  I wrote in to ask if they would allow me to complete the mileage within a week after my recovery.  No answers.  I guessed to be fair, a challenge was a challenge and there were rules.  5 days after, though I could only get out from any sitting or lying position with pain and difficulties, still, I thought I would give riding a try again.  So at night, I slowly took my ‘trusty’ bike for the ride.  I did this for about 8 days, but cutting usual mileage.   I managed to complete 1051+ km by target date.  I then placed my bike out of my sight.  I needed to rest my spine more completely thereafter.

A few more days passed.  I tried walking at my usual running route.  I completed 3.5 km slowly.  The next day, I did the same.  I researched on how to walk a bit quicker so I read up a bit on race-walking.  I tried the following day but couldn’t sway my hips as much.  The following day, more pain.  I stopped the race-walking mode.  I just walked again.   Last few days, I managed to continue to walk.  I couldn’t jog.  I felt the jarring impact of each stride and I experienced some pain.   I walked on.   I was determined to walk back to health somehow even if I couldn’t run for the time being.  So I am grateful.

Running last two years had given my body some additional resources and strength to draw on.  So while some well-meaning friends said I had to train smarter, that I had to run less, I had a different perspective.  Running has inspired me to get this far.   To quote Shakespeare: ‘Bid Me Run And I Will Strive With Things Impossible’, unquote.   Besides, the marathons, races, challenges sharpened my sense of wanting to go on, to continue to improve myself.  In living we often forget our sense of being, other than just working for a living for example. 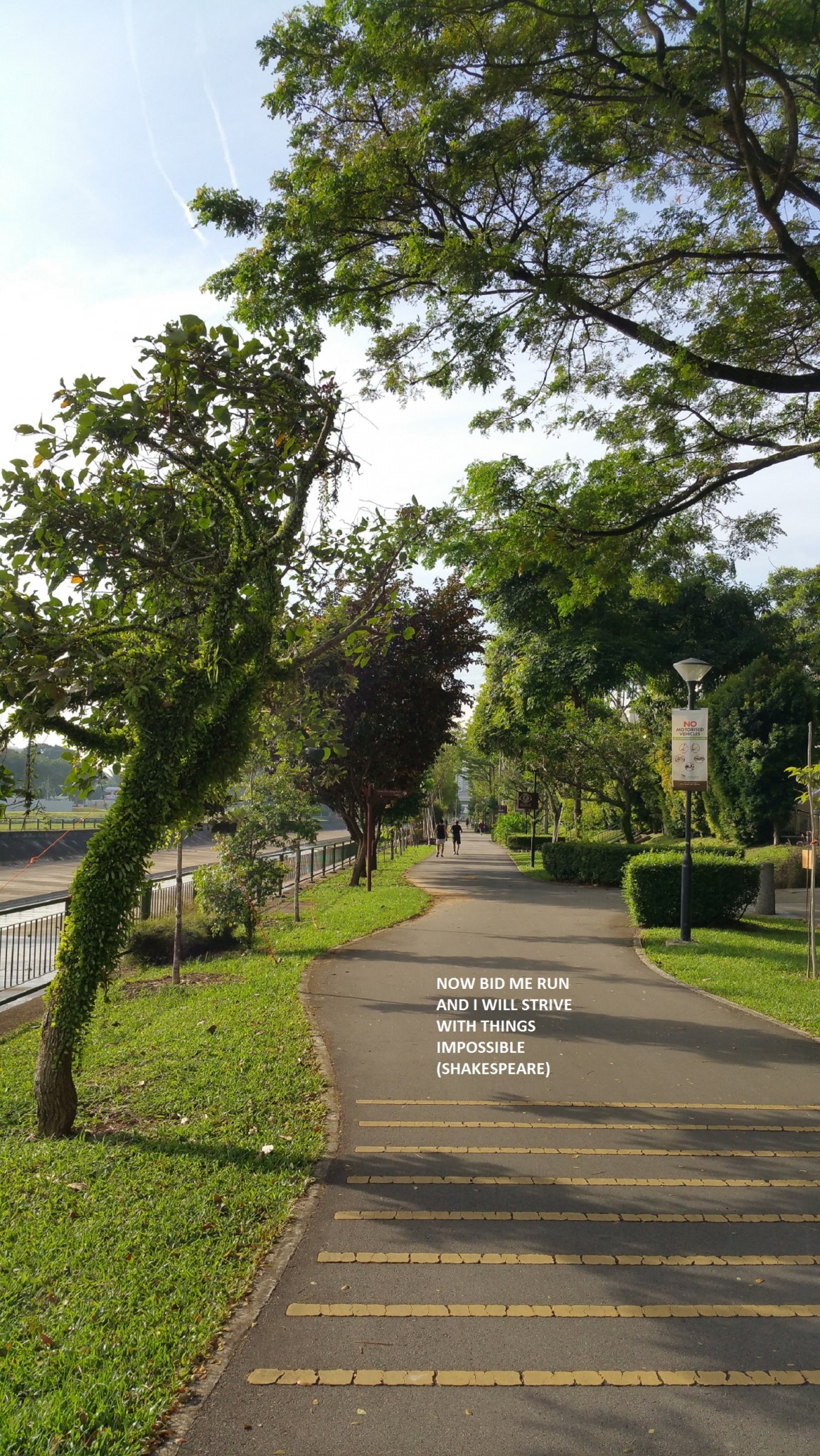 Accidents do happen in life.   I am grateful for having been able to run the past two years or so, and most times I run as if this could be the last day.  That has driven me so far to complete the challenges I set for past two years.  Speed has never been top of my priority though I try to improve.   I valued more the freedom  that running had given me.  And this feeling is even keener during these days of non-running.  I will be back.  It will take some time.  But I know, I will run.  So hope everyone has his/her own moments of Happy Thanksgiving.  With God’s Grace, I have run, and with God’s will, I will continue to run.  Be Safe.  I am grateful.