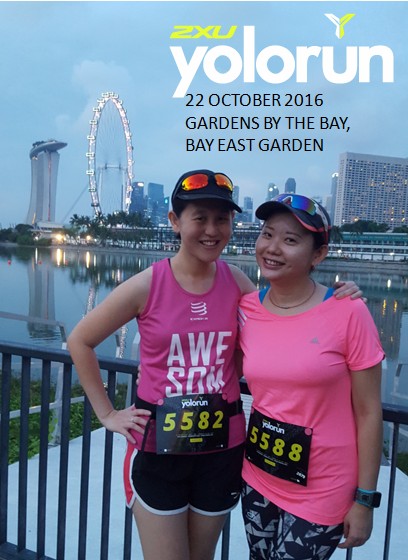 YOLO the acronym for “You Only Live Once”! Yesterday the 22 October 2016 was the YOLO Run which was held at the Gardens Bay the Bay, Bay East Gardens. The YOLO Run is about freeing oneself and running shirtless for a good cause. X-Change Republic Pte Ltd, the race organiser would donate a sports bra to the BRAS (Breast Reconstruction Awareness Singapore), for every participant who runs shirtless on the race day. Sports bra are an  essential part in the recovery process of breast reconstruction patients.

Race Entry Pack Collection (REPC) was held at OCBC Arena – Hall 5 on the 14 to 16 October 2016, a week before the actual run. This was my first time collecting my race entry pack at the OCBC Arena. I went on a Friday with my colleagues. Here’s the PROs and CONs of the REPC. 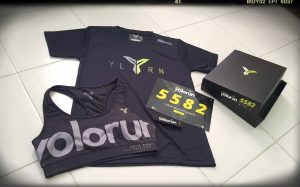 New Environment – Nice to have a change in environment when collecting the race pack. Nice decor for photo opportunities! Cool to also have what you would receive in the race pack displayed out! Great to have their merchandise and vendors stall all in one place so that participants can do some shopping after collecting their race packs!

Cool, Sleek & Personalized Race Pack – First time receiving a race pack in a beautifully packaged box. I got to give it two thumbs up! It was super pretty and it had my name and race number printed on it. I love that the race pack was personalized to each individual and inside had our race bib, sports bra and race event tee!

Instagram Contest for most creative shot of the YOLO race Pack – I always love Instagram contests, this gives participants the chance of being creative and taking photos at the REPC site. 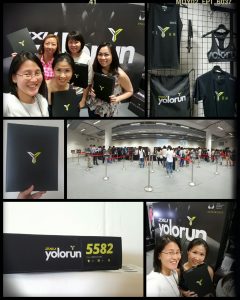 Gets crowded very fast – As I went on the first day or collection, there were also many participants that went to collect their race pack too. The queue system was not very good, though it was meant to be systematic, not every queue had people in it because they were organised by race bib numbers, causing long lines to form making the place very crowded. As  I left the Hall, I saw many people queuing to get into the collection area. This is the first time I had to see crowd control being done.

My suggestion would be for the organiser should just consider the traditional way of issuing the race pack which is first come first serve which is the norm at most REPCs. This would prevent some queues from being under utilized and clear the crowd faster.

Information Counter could have been better prepared – Because of the mistake in sizing on the website, a lot of participants received smaller sizes than what was advertised on the YOLO sizing chart. The sizing were a few inches off and this made a lot of people want to exchange. The organisers did not expect to be receiving lots of exchanges and queues were chaotic at the Information counter. I gave up trying to exchange as there were too many people.

Ps: There were a few feedback from participants on the YOLO Run Facebook page notifying the organiser that the sizing they had placed on their website did not match what they had listed, so participants received smaller sizes. The organisers did make an official announcement on Facebook and apology regarding the mix up in sizing. They rectified the situation by saying that participants can bring their sports bras or event tees to the race site on the actual event day to do a 1-to-1 exchange. 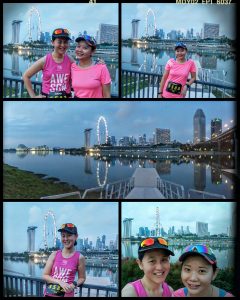 Though it’s encouraged to run shirtless for a good cause, I was tad too shy to go shirtless and at the same time, I was feeling a bit under the weather with bad stomach cramps. This was the first race that I didn’t complete too. You’ll know more as you read the review.

I woke up at 04:30 hrs to get ready for the race. I had bought tickets for the shuttle service from Yishun MRT Station which was scheduled to leave at 05:15 hrs. The organisers had catered for 3 main pick up points from different parts of Singapore. For a price of $4, my friend, Cheng Yee (CY), and I were able to get to the race site with convenience and comfort.

We reached the race site at around 06:30 hrs. The shuttle bus had dropped us off at a drop-off point which was about 200m away from Gardens By the Bay, Bay East Gardens main entrance. We were surprised when that happened because the last time I took a shuttle service for any race at Bay East, the bus would drop us directly outside at the main pick up point.

The first thing that we did was to get our sports bras exchanged at the information counter. The sports bras sizing were a bit off. I had initially requested for a size ‘M’ but the sizing was a tad too small and it was tight. As we were early, there was no queue at the information counter and was exchange was done in a fast orderly manner. Next we went to deposit our bags at the bag deposit area, it was also really fast.

After doing so, we wanted to know whether there was a hydration point where we could get drinks before we started the race. We went to the Information counter to check but the volunteers didn’t seem to know and they were not very nice nor helpful. She just quickly told us that we could try walking to the START point and there might probably be one there and went to help out another participant, talk about a short attention span!

Since we didn’t receive much help we decided to head to the toilets and get some water from the water coolers there! As usual there was a queue at the toilet and we had to wait quite sometime before our turn came. I know there were mobile toilets around but I still prefer using the ones at the main drop off area since we were early.

At this point, my stomach had began misbehaving again. The pain kept coming on and off. CY and me decided to take a slow walk to the START point.  As we entered the START pen, we were greeted with the beautiful scenery of our Singapore Flyer and Gardens By the Bay Domes on the opposite side. The sky was slowly turning a shade of pink because of sunrise which was just happening. We took a few photos along the way. We managed to catch up with some friends at the START Pen and some of them had already noticed that I looked a bit pale. 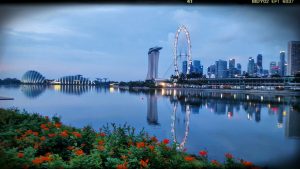 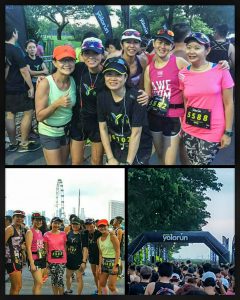 Flag-off was done punctually at 07:00hrs! CY had asked me to try jogging slowly but after a few metres past the START line, I gave up… I was a bit disappoint that I couldn’t continue on. The pain had taken over and I had to veer off the route to the side to find a place to sit down. After resting for a bit, I felt better and decided to brisk walk to get a bit of workout in, so I continued all the way up to the Marina Barrage where the hydration point was. At this time, the pain had come back again and I decided to get some drinks and sit down at the barrage and rest. There I saw the sun rising over the Marina Barrage bridge which connected Bay East to the Barrage. It was a beautiful sight. As I saw all the participant whizzed by me as I sat at the barrage, I wished I had the strength to continue but I just didn’t feel up to it. Once I felt better, I decided to come down from the area I was sitting and head for the toilet. As I was coming down the barrage slope, I could see some runners returning back. They had to go up the slope again to return to the FINISH point. At that point, I was thankful that I chose not to do the race. Imagine scale the slope at your 8km mark again… Tough is definitely the word. 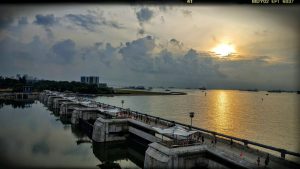 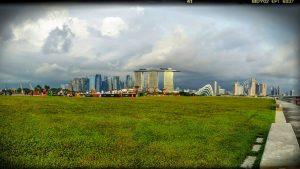 When I came out of the toilet, the sky had already became dark and there were strong winds blowing. It was going to rain, I decided to make my way back to the FINISH line. As I walked, I could feel that it was drizzling and soon it started pouring… I couldn’t run as my stomach was still giving me issues, so I just walked in the rain telling myself that I will be okay. I managed to collect the runner entitlements and seek shelter before it started pouring heavily.

Shortly after finding a place to settle down, my friend CY messaged me that she had completed the race. After cooling down, we went to collect our bags from the deposit area. OMG! There were already long queues being formed. I decided to find a place to sit and wait for her. The queues were so long that she had to wait about 40 minutes before she got her bag. This has never happened at other races…  At this time, the pain was worst! I couldn’t stay for the Yoga session. So much time was wasted just queuing for the bags that I didn’t have the mood to go around the race village to take photos. I just couldn’t wait to leave the race site and get some breakfast. I wanted to take the shuttle bus but there was a long queue so I had no choice but to walk all the way to Stadium for breakfast. 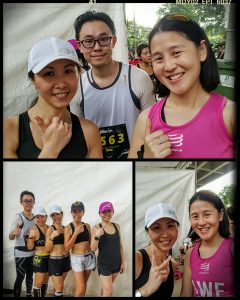 Overall, just to sum up these are the things that I thought could be done better: 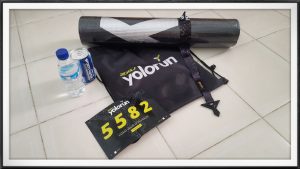 I hope the above feedback provided would help the when planning for the next YOLO race. Though I may not have complete the race, I’m still glad that I came for  the event. There will still be many other races but health and listening to your body is important. Our body has limits and we should not push when we know we are not well.

Till my next race review. Stay strong and healthy everyone! Congrats to all that complete the race!