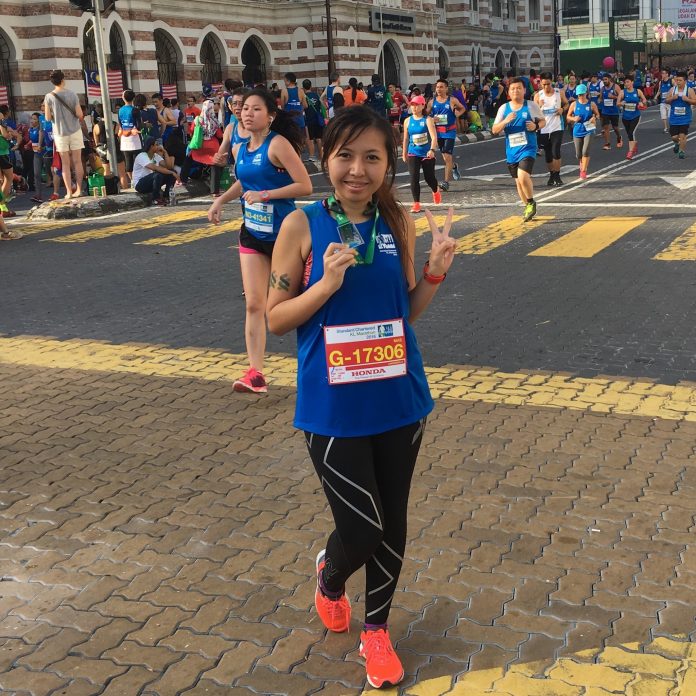 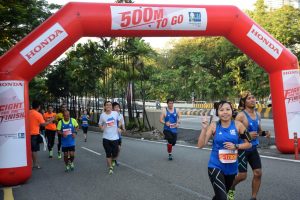 Photo credit: MY Runners (500m to finish but I was walking till I saw Photographers, must act as if I’m finishing strong 😂)

[Race Day]
It’s 3am, I don’t want to wake up 😭 But I have to, came all the way to Kuala Lumpur already of course cannot DNS right? At first I would want to see the flag off, but when I find myself can’t sleep at 10 plus even though I’ve been trying to sleep since 8 plus, I think I’ll need the extra time to sleep 😅 I remembered for Sundown marathon I was running and yawning 😂 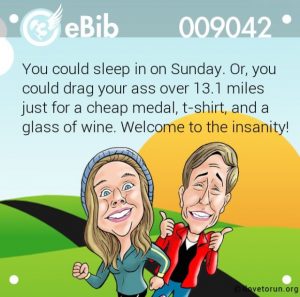 (Facebook Credit: I <3 to run)
I must be more insane since there’s no wine and for SCKLM half marathon there’s no finisher tee 😂

The flag off time for the full marathon category is 4am. By the time I’m done preparing, it’s 3.58am when I waited for the lift. Lucky me the race site is just 200 metres away from the hotel that I’m staying. Thanks Yi Heng for researching for the hotels 😊 (p.s. To my future husband [if I’m ever gonna have one]: I stay in the hotel ALONE. But well, it’s the Lunar 7th month so I hope I was alone at least 😂)

Just nice when I’m reaching the race site, I heard the emcee counting down to the flag off and I rush there wanting to catch at least some part of the the flag off. The pacers are in the start pen according to timing which is good unlike scms last year, the pacers were all quite in front of the start line. The pacers for this year scklm had only one balloon tied to them but it’s a super massive balloon, wonder is it heavy or not (though its only air but for me when running carrying even 1g of extra weight is heavy so I want to lose weight!) 😂 Huge ballon is good, those who wants to follow the pacers can easily spot them and follow them/aim to catch up with them. The 7 hour pacers is kinda cute suddenly stop there at the start line, maybe waiting for the last runners? 😆 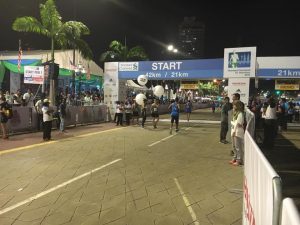 It was from Yi Heng then I know that the cut off time for full marathon is only 7 hours, so any runner slower than them is kinda risky and might end up in the sweeper bus if they couldn’t reach the cut off time at some checkpoints 😱 I really didn’t do much read up about the race 😂 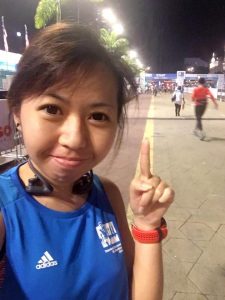 [Photo taken after the full marathon runners were flagged off 😊］

As the half marathon category will only be flag off at 5am, I explored the race village a little. It’s a little lonely because most of my friends are doing the perfomance series back in Singapore. Somehow after a while I began to feel thirsty. But theres no hydration to be seen 😱 But I can’t possibly just walk back to the hotel and get water right because the start pen is opening soon? 😅 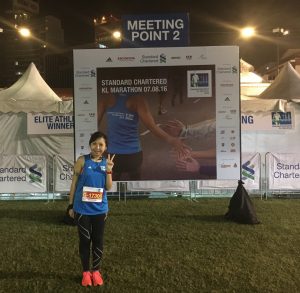 Then I spot familiar runners from Singapore 😊 And congratulations to Nakamura San on coming in 1st in the half marathon category! 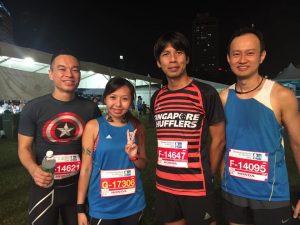 They are all super fast and ran sub 2 hours, I don’t know if I can ever achieve the impressive sub 2 hours ever for a half marathon in my life time. First thing first, other than the fun runs coming up, Army half marathon is what I look forward to after this. Noah and Wyman is the pacers for AHM, Noah is pacing for 2hrs20mins. Maybe I can follow him. But I don’t dare to place much hope either since I’m getting slower for half marathons timing.

Somehow I’m actually glad that there’s no pacer for the half marathon. Following pacers can be quite stressful and I failed many times in following pacers and it can be quite depressing. Thank you Noah for reminding me not to chiong at start. Everyone else is chionging and we will tend to somehow follow the flow.

The route is a hilly one, no scenery as its mostly expressway and CBD area. The weather is good, not humid and is quite cooling. However the air is not good, quite smoky. Every 2km after the first 4km there’s hydration point but can’t expect that water to be cold as its a big event with many runners, the water is prepared way ahead to ensure that runners do not need to wait for water. I like how sponges soaked in ice cold water is available for the runners at 2 points in the half marathon route. It’s really so shiok! 😁 And makes me a happy runner as the last two kilometres I was holding the sponge on top of my head then squeezing out the ice cold water bit by bit on me. And there was a part where there is water shower where runners can run through to get soaked by water. Of course I ran through it 😆

When running long distance, I can think of many bo liao stuff. Dunno how about other runners or is it just me. During the run, I dedicate part of the run to a road kill, a mynah flat and dried on the road. Makes me feel grateful to be alive. And somehow words on other runners past run finisher tee is quite motivating too: Show up and never give up. Though I sort of give up at the last few kms but the last few kms is really very hilly. All of the upslopes I walked 😂 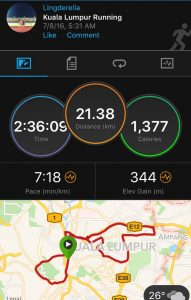 First ever highest amount of elevation in a run 😭 When it comes to downslope, I feel like walking too, but too wasteful to walked as running is more effortless when going downslope. Seeing other runners walk is so tempting for me to walk too 😭 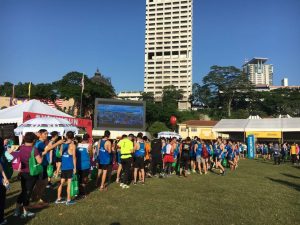 😭 Motivation: Run faster because no queues for runners who ended their run early 😆

Ice creams and packets of towel is also distributed to the runners. The towel is sealed up, I think is because for runners to use at ease because of hygiene purpose and the towel is cold, so nice!

It’s amazing how running gets us new friends. I met this friendly pretty lady from Kota Kinabala for 3 times in two days! Such coincidence! 😆 First we met in the gym in our hotel. I was there for a while doing a “hamster run” then we started a conversation, saw her again when I was heading out for dinner and then met her again in after race! 😊 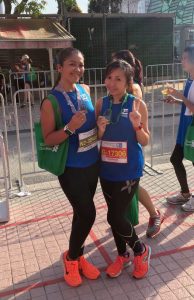 And lastly congratulations to Yi Heng for achieving PB for full marathon! Sub 4 hours and he really trained very hard for it! Now I felt embarrassed with myself that I’m really lazy and the lack of trainings 😂 Though I didn’t complete within the timing I aimed for, but the run is still good. Don’t have the usual abrasions and body aches. Didn’t have the “run die me” feel and this is the first time my bib still look so fresh after a long run 😊 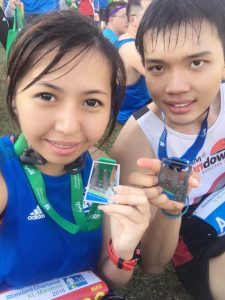 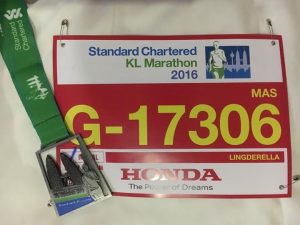 [Before race]
I wonder this should be considered as my first overseas race or first local race. In a simpler meaning, I’m a product of Malaysia made in Singapore. And happy birthday Singapore! 😊

This was supposed to be my first solo trip. I have never been anywhere further than Johor alone. But still, I haven’t been to anywhere further than Johor alone 😂 Yi Heng asked if he can come with me. Of course I don’t mind and is actually super glad I have a friend to accompany me. Also because of safety reasons, it is still better not to travel alone 😁

This is also a runcation but seriously I didn’t do any planning for this trip. It’s Kuala Lumpur, a place I’ve been to a couple of times. What I did was only to buy air tickets. I chose SCKLM2016 as my first race away from Singapore is maybe because I want to start with somewhere nearer and familiar as I thought I will be going alone. So maybe next time I will try somewhere else. Tokyo? Australia? Taiwan? HongKong? (Super want to go a marathon in Hong Kong because I want to go jump off Macau Tower at the mean time during the trip) Thailand? China?(Running the Great Wall of China is very attractive but the steps kills 😂) But first I’ve already registered for Penang Bridge Marathon in Novemver. Just registered for the slot but nothing else was planned yet too 😅

One day, when I’m brave enough (The movie the hills have eyes and wolf creek freaks me out), when I have no more reasons to stay, I will leave. Explore, travel the world and live freely is what I’ve always dreamt and wish for. A life time is not enough to enjoy Earth. Run like Forest Gump. 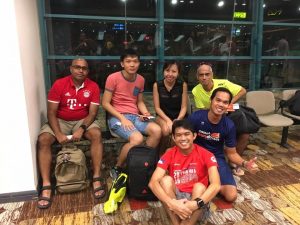 When we arrived in Kuala Lumpur early morning of Friday, the 6 of us chartered a taxi to go to the venue to collect our race pack. Taking taxi is a better way, taxi is not expensive in Malaysia and it saves all the trouble transferring. 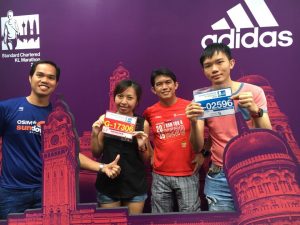 I was trying to find my name on the board then realised only the full marathon runners name will be there 😭 Hello? Running half marathon also not easy hor? Ok, even the 1km kids dash also not easy 😆 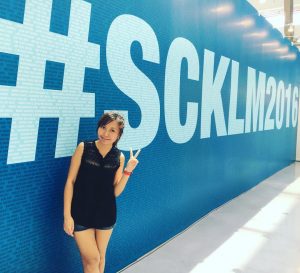 Most the the time there is just finding food and load for the race. Just googled and follow the recommendations. But I seriously eat a lot! Hopefully the half marathon got burn them off! 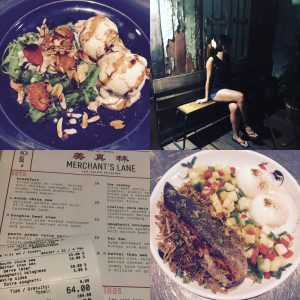 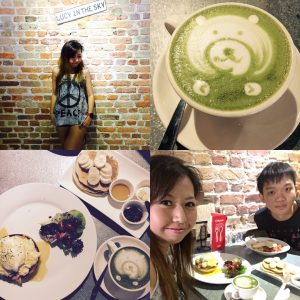 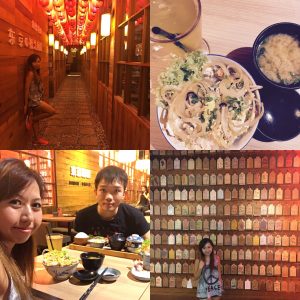 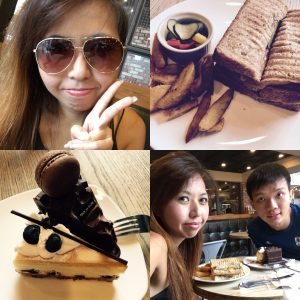 Didn’t really do much sight seeing except to the Petronas Twin Tower. Thank you Yi Heng for helping to capture this beautifully taken photograph. He is lying flat on the floor to capture this picture 😂 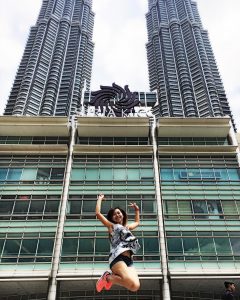 Few hours before the flag off, we also head to Dataran Merdeka, the race venue to look around first so on race day we will not get lost but then realise it’s so near actually. This place reminds me of Padang back in Singapore. 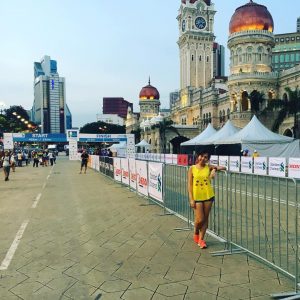 (Because everyone is crazy over Pokemon Go and just nice I saw this cute Pikachu singlet when shopping 😂 But I not playing because eat, sleep and run already not enough time 😭).