Running at the Gold Coast Airport Marathon (“GCAM”) had been a meaningful affair for me. It allowed me to explore the wonders of Queensland and at the same time reflect on my running journey.

Unlike most participants who are there to achieve their run targets, I had set myself a different objective. My aim at this trip was to bond with the JRL team and to know like-minded runners from other parts of Southeast Asia. This was also an excuse for me to do a fitness check instead of attaining any personal bests due to the lack of training.

It was mixed feelings before I received the itinerary for the Gold Coast trip. Having been to this place twice before this, I was wondering if I were to go through the same activities again. To my surprise, none of the activities planned was what I had done before! There are definitely many more things one can imagine doing at this Sunshine State.

The trip started with the usual pick-up of race bib and last-minute stocking up of running essentials at the race expo. JRL team had the honour to interact with the elites as well. After which, most runners will go for an easy acclimatisation/warm-up jog along the coast, before resting for the 10km race on Saturday for some.

The Saturday afternoon was then spent immersing ourselves in the beauty of nature through the leisure whale-watching cruise out at Pacific Ocean. We were treated with the sights of beautiful homes along the river before heading out to the ocean getting awed by the dancing whales and dolphins. These helped calm the nerves of the participants who were anxious to run their 21km or 42km races on Sunday.

The 42km route was nothing new to me. The only challenge for me was to stay focus and aim to stay close to the 3-hour pacers. I slowly lost sight of the pacers at 27km mark but pushed on to stay on track for 3hr 08min finish. Unfortunately, a sudden cramp at my quads hit me at slightly before the last U-turn (about 36km mark) like an electric shock, which left me asking for help from the by-standing cyclists to bring me to the side of the road. After watching helplessly at the 3:10, 3:20 and 3:30 pacers who passed me, I managed to pick myself up and bite through the pain, finishing the race at about 3hr 30min. This was a 30min more than my 3hr Boston Qualifier done at the same course in 2015!

My disappointment quickly subsided after hearing good news from my fellow team mate Yvonne and many other Singaporean runners doing extremely well! Thinking back, the race experience was still as awesome, if not better, as the previous times I was there. The great atmosphere created by the race officials and volunteers, supporters, residents and participants all throughout the course will be the reason that many runners are going back year after year.

After the race, it was celebration time! We had a dinner with great seafood and steak. We even bumped into the elite Japanese who were there to celebrate their victories too! 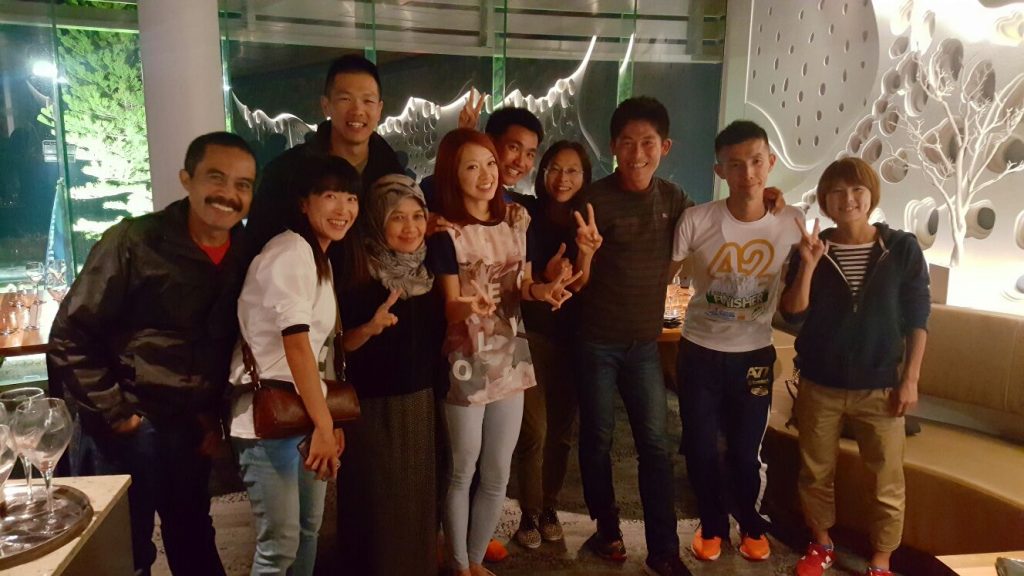 On the Monday morning after marathon-day, while some of our counterparts tried jetboating and hot air ballooning, JRL team was given a chance to self-drive through the scenic Glass House Mountains and ocean views of the beaches of Mooloolaba before we reached the home of triathlon at Noosa, Sunshine Coast. A walk/jog up the Noosa National Park the next morning was also a great post-race recovery workout.

On our way back to Gold Coast for the last night before flying back to Singapore, we definitely would not miss checking out the outlet store Harbour Town where we snap up sporting and fashion goods at great prizes! The brands which caught our attention included Adidas, Asics, New Balance, Nike, Oakley, Puma, Under Armour, and many more!
I must say that the trip exceeded my expectations in meeting my objectives and showed me where my fitness level stands. This helped me to set my goals in all aspects going forward. 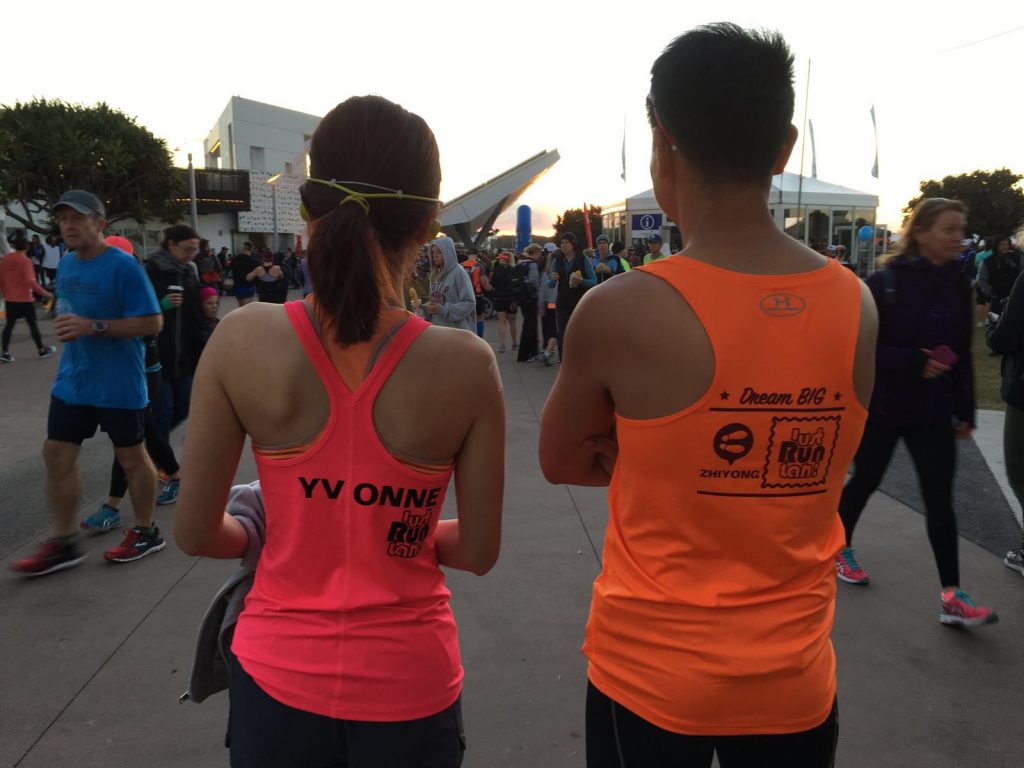 This was a trip which I travelled with my running buddies with a strong mission in mind – Boston Qualifier. After hearing all the sharing by runners who returned from the 2014 edition of the GCAM with glorious results, we put in all the effort 8 months prior to race and brought ourselves to the test. Eventually, 3 of us qualified for the dream race for most runners – Boston Marathon.

As the tagline of GCAM goes, “Good Times”, we stayed on after the marathon for some great fun!

It was my first ever overseas run with a group of aspiring running friends. This was also the year which I re-ignited my passion for running after a more than 5-year hiatus. I did the half marathon this year as I just started to run more regularly. This was also the year which GCAM became the first Australian marathon race to attain the prestigious international designation – IAAF Bronze Label Road Race. GCAM then went on to become the first road race in Oceania to be named as an IAAF Gold Label Road Race.

Everyone in our group celebrated with great timings across the half and full marathon categories. The inspiration and fun I get from this trip made me start my quest to explore the world through running.

We chose to follow a relaxing itinerary this time and had great times chilling out and catching up with one another.