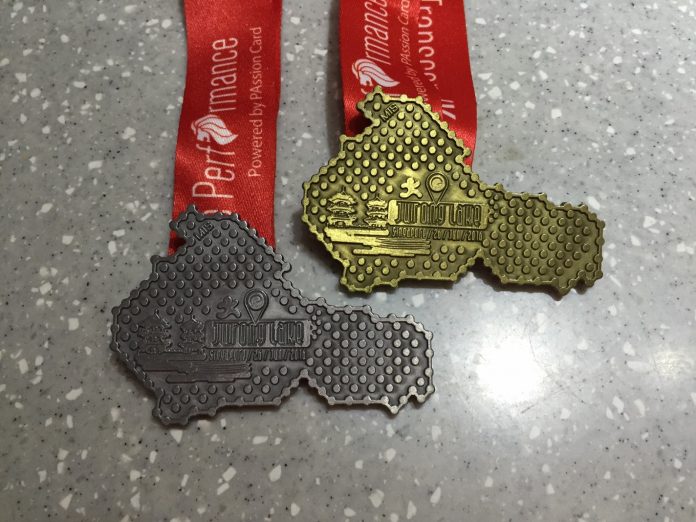 Jurong Lake run. The 2nd run in The Performance Series. Consisting of a series of 5 races. This is the one run that combines medals from 5 individual races into a complete Singapore map. The one run powered by passion card. The one run that will help you perform better. Well, I suppose after 5 runs, you would have better performance right? Speaking of performance, how well did I do? Let’s find out then.

From our past experience, parking near race events has always been an incredible nightmare. To keep our sanity this time, we decided to park at the open air carpark just beside Clementi MRT station. Yes, not one station but 2 stations away. That’s how fearful we are this time round. A quick train ride later and we were greeted by a sea of pink coloured shirts that dotted the landscape.

The route for the Jurong Lake run is very straight forward. One round is 5km. Those doing 5km, one round for you. Those doing 10km? Well, help yourself with another round. As such, it made a lot of sense to get the 10km runners started first before the 5km runners. To reduce congestion, there were 3 waves of 10km runners. The first wave will start off at 6.30am followed by 7.15am while yours truly joined the last wave at 8.00am. Why choose such a late timing? Well, the wife will be joining her ex-colleagues for their 5km at 8.45am. Since we are all running around in circles, there is a possibility of meeting them during my 2nd round.

When I reached the start point slightly over 8am, everyone else who was doing the 10km had already flagged off. Something was consistent in my performance for these series of races. Always starting way behind.

Slightly over 40 years old, the Chinese and Japanese Garden is sort of being in a odd place. It doesn’t have a particularly rich history compared with the Botanic gardens and it doesn’t have a newness factor to it compared with other parks. So what then? Time to give the old gardens a face lift. Which explains the hoardings and construction vehicles around. According to some sources, the rejuvenation works will only be completed by 2020.

I managed to spot my wife when she was just starting her 5km. How did I manage to spot her in that sea of pink t-shirts? She’s my wife, of course I could spot her. I did however had a little help from the hat she was wearing. It was one of those heavy duty gardening head gear, capable of keeping out even the most brutal sun. Catching up with her however? Not so simple. Remember those movies where the main characters had locked their eyes before being separated by a horde of people? This was slightly different. After spotting her from a good 50 meters away, it took me about 10 to 15 minutes before I managed to catch up. There were simply too many walkers and the running path was rather narrow at times. Why were there so many walkers? Well, the heat from the 9am sun was rather merciless. Would wearing a big epic looking hat helped? I don’t think so. The nice view of the lake however, did gave a small respite in this incredible heat.

As we made our way back to the start/end point, the all familiar turn left to finish and turn right to continue another round sign appeared. Since it was already past 9am, the volunteers were funneling everyone in one direction. The direction of the finish point.

What greeted us after the finishing line was more mud. The final obstacle between me and my medal. Instead of stepping onto the squishy ground, a footpath consisting of a series of wooden boards was placed on the ground. Not that it really mattered since my shoes were already muddy. Did I care about those shoes? Well, those shoes may be less than 6 months old but they looked pretty worn out. The good thing? Time to get new shoes soon.

This blog post and other adventures can be found at
http://iamspartan6318.blogspot.sg/