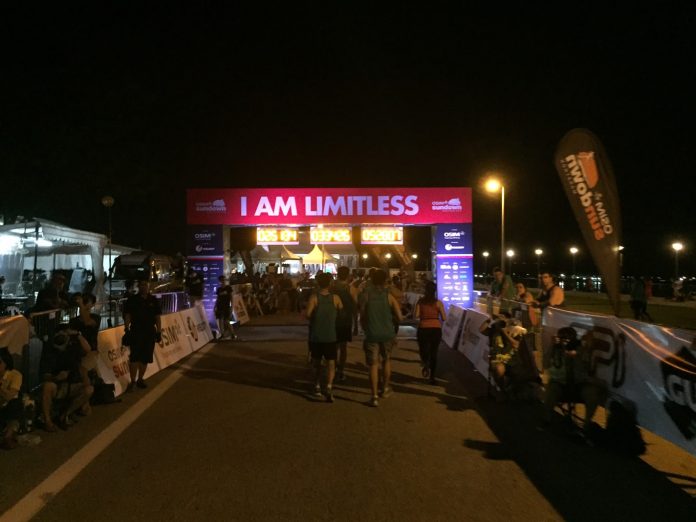 Like most people, I have a regular sleep cycle. Which is to sleep early(actually much closer to midnight) and wake up early. I try not do anything that will disrupt this cycle. Otherwise poof, you become a zombie with limited cognitive abilities for the entire day. So, why did I sign up for this half-marathon during the wee hours of the morning? It was a mistake.

So far I have been toying with the idea of completing one of those half-marathons. Unfortunately, the flag off timings for this category was usually 5am in the morning. That means you have to wake up at the unearthly hour of 3.30am or even earlier. Get yourself together in the shortest possible time and make your way down to the race venue. Seriously how do you eat breakfast or even poop properly? That in itself already sounded like another race.

As a non-runner in my previous life, I have heard about this Osim Sundown on and off in the media. Never knew about the start time and all those specific details. To my simple mind, this is going to happen when the sun goes down right? Which is around 7pm right? During my sign up for the event, it says the race village will open around 5pm.(There wasn’t any indication of the flag off time on the website at that point). Awesome. Using my powers of assumption, I thought I could complete the entire event and be back home by midnight. Big mistake. Which is why people, never ever assume anything.

After reeling from the initial shock of the start time, I decided to suck it up and go ahead for the run. This is going to be a first of many. I have never ran at the ridiculous time of 11.45pm before. I have never completed a 21.1km so far. I have never ran 2 days in a row. I have never gone down to a race event at the F1 pit building before. With all these new and exciting challenges waiting for me, I think becoming a zombie the next day might be totally worth it.

I knew that this event was big but didn’t expect it to be this big. By the time I got off the Promenade MRT station, crowds were already everywhere. Some were waiting for their friends. While the rest were queuing up for a last minute release at the station’s toilet. Since I was slightly early, I decided to make my way to the F1 pit building to have a look first.

Upon arrival at the pit building, there were other fringe activities. You have people playing dodge ball and basketball. Are these people doing the run after their game? I have no idea. But if they are, they will truly be the epitome of what you define as limitless(if there is such a thing since limitless is well, limitless).

Since I was a bit early, I thought I might take my time to visit the portable toilet to get rid of any excess weight in my bladder. I may be sweating buckets later but I’m sure the only way the water in my bladder is going, is only downwards.

After the refreshing release of the excess water, it was time to join the queue for the 21.1km. The race was supposed to start at 11.45pm but there was a delay of maybe 30 minutes. Guess I won’t be running 2 days in a row after all. After being ushered into the pit building, the giant start sign was right up front. To prevent a stampede due to the massive crowd, I can understand why batches of runners were released. As for the delay, it might be due to some runners taking selfies at the start point. This turned the MC into a broken recorder which she kept saying, “Please do not take any selfies at the start point!”

I did my first 10km fairly easily. I mean since you are running with people of similar fitness level, you don’t really encounter any sudden stops or jams. The road was pretty wide save the part at East Coast Park. In terms of personal space, it wasn’t as tightly packed as some of the other races I have been to. The running environment was good, my body however, was starting to tell a very different story. After doing the fitness challenges at the S.Smiles event earlier, the soreness in my thigh muscles started to surface. It was bearable at first but the pain started to get to an annoying level that got worse with every step.

Somewhere around the 12km mark, I spotted a medic. I always knew these guys have a tube of analgesic cream on them. The medic got to work in no time on my thighs and I was off. The throbbing pain was now replaced by a burning pain. The burning sensation made me feel so incredibly awake that I just ran past other runners for the next 5km.

Around, the 17km mark, the effects of the cream wore off and I was back to normal. This time round, the throbbing pain came back with twice the vengeance and I was reduced to walking. There was absolutely no way to run a single step. I tried to get back into a running pace but my legs did not listen to me. I could use some mind over matter but that might give me a new injury. So, it is time to take it slow like most of the runners around me. 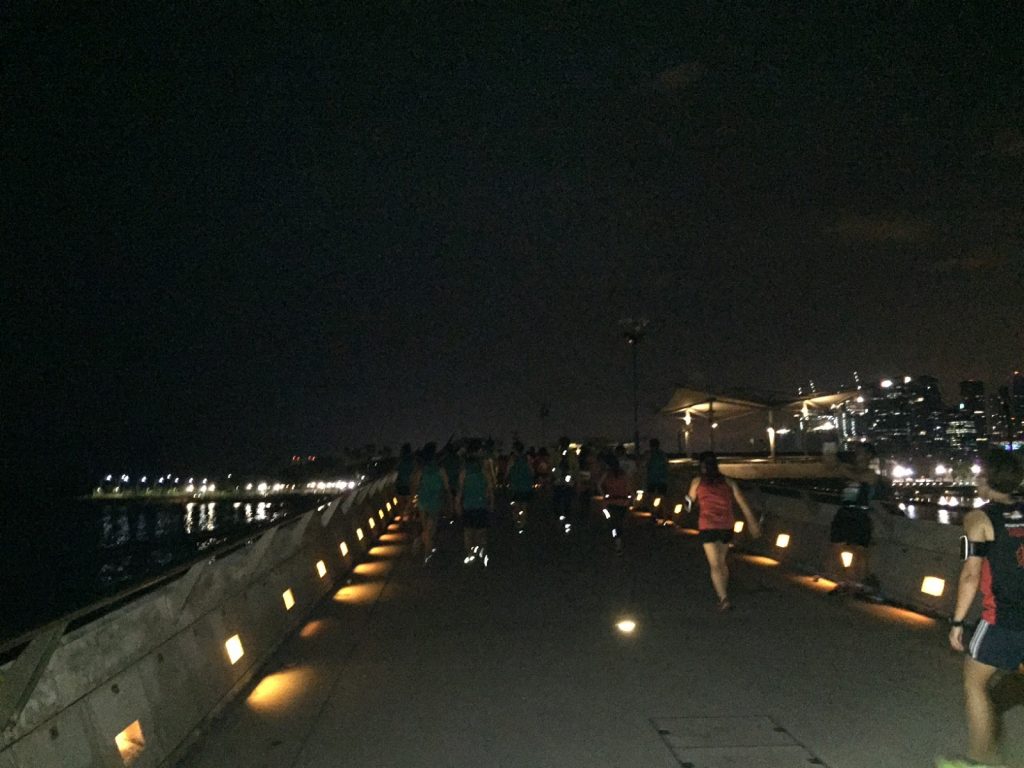 While crossing the helix bridge in the final 500 meters towards the end point, there was a group of China runners cheering the rest of us on. They were saying  “只有500米， 还在走？ 一跑就到了！”。To which another China runner beside me replied, “我的脚快瘸了， 还叫我跑？” It was funny to say the least but I also realised one thing. When you run together with others towards a common destination, there was complete unity. It doesn’t matter where they are from, what they believe in or what language they spoke. At that very moment, all imaginable differences and conflicts are gone. World peace? Running might just do that.

My tired legs finally made it across the finishing line. I did it. I accomplished my first 21.1km, my first unearthly hour run and my first run in the city. The excitement quickly died down as my phone had ran out of power. There was no way to call a cab or get an Uber. The only way was to flag down a cab among the throngs of finishers who were all desperately trying to get home.

I was extremely lucky. I managed to hail a cab while walking towards Marina Square. The driver had completed her shift and was trying to pick up a final passenger and get home. She told me I was the 2nd runner she had picked up for that day. She was rather polite as well and asked if she could unwind the windows. That’s when I realised I smelt terrible, something in the category of week old socks. She was quite chatty, probably to keep herself awake and divert her mind off my smell. What surprised me even further was that she has a day job. She only drives the graveyard shift 2 to 3 times on the weekends. Her motivation? She is single and the thought of picking up cardboard boxes on the street worries her. If you need a lesson about grit and determination, sometimes we just need to simply look around. She might not be a runner but if she is, she wouldn’t have a problem finishing a marathon. As for me, I may be beaten today but tomorrow is the day I stand up. This is truly how you become limitless.

This blog post and other adventures can be also be found at
http://iamspartan6318.blogspot.com/