The OSIM Sundown Marathon is one of the biggest night races in Singapore and this year more than 27,600 participants took part in this year event! For me, this was my 2nd Sundown event. I had previously participated in 2014 in the 10km individual category. This year, I signed up for the Team of 4 (10 km) Category and was running along with team mates who were doing their first night race.

We were all super excited for the race and wanted to see how we would perform during night runs. Most of our trainings were done in the early mornings and evening but never after 8pm. We got to the race site early as we wanted to start in the first wave. 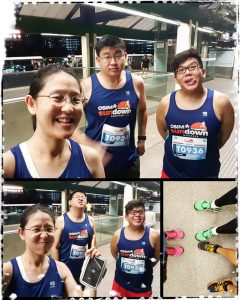 We got to the F1 Pit Building around 21:10hrs. As soon as we got there, we could see lots of participants and were wowed by the sheer numbers! It was a  different feel for night run events as compared to morning run events! There were lots of pre-race events happening at the race site like dodge ball competitions, mass zumba workouts etc. As usual, we took our mandatory wefies to remember the fun moments! These photos are definitely something I know I would look back and remember! 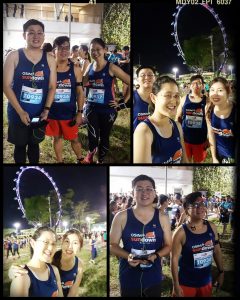 As time was fast approaching for the 10km START pen to be opened, we quickly made our way to it’s entry point. We wanted to be in the 1st wave as we wanted to catch the last train back from promenade MRT Station. If we were to start off in any of the later waves, we would have missed it! The START pen opened promptly at 21:30hrs and all the 10km runners made their way to the front of the starting line. 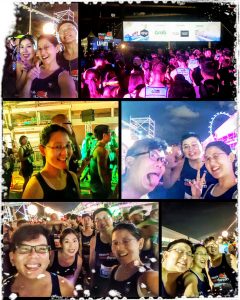 I must say the half an hour wait in the START pen was not a boring one. The emcees were really entertaining and the music that was played was really upbeat and it does get you pumped!

The time for flag-off finally came! The flag-off party for the 10km event which included Minister Baey Yam Keng and Founder of OSIM Interenational Ron Sim went up on stage to sound the horns! But before that happen, I was really impressed with the laser light show that the organizers had put on at the pit building. You can check out the video by clicking here.

My only impression was that light show was sooooo cooool!!!! After that impressive light show, we were promptly flagged off at 22:00hrs!

The 10km route was a bit of a challenge. We  had a few slopes to overcome, they included a slight incline after the pit building heading to the floating platform, the gentle slope around the Youth Olympic Park to the Double helix bridge, the slight incline at the double helix bridge and not forgetting the last slope at the 9km mark up the bridge back to the F1 pit building. It was hard work but I’m glad all of us conquered them. 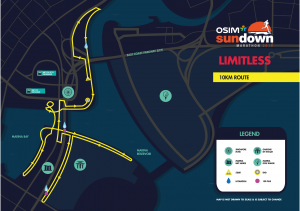 Traffic was pretty smooth except for a bit of a hiccup after 200m exiting the pit building, slight bottleneck but that cleared pretty fast. It was pretty scenic especially the part where we were running past the Marina Bay Sands Open area, you can just see the Singapore skyline brightly lit up. Hydration points were sufficient though I felt that the first one could be placed after the 3km mark and not after 2km which was a bit too early for drinks. Volunteers also deserve a mention here as they did a good job cheering the runners on and prepping the drinks!

I completed the Sundown Marathon 10km Category in 1hr 16mins (Official Timing). Collection of medal and post race snacks (banana & 100Plus) was really smooth. I was so glad to complete the race and just catch a breather before finding for my team. We didn’t stay long at the race site to check out the post race events as we had to rush off to catch the last train back. 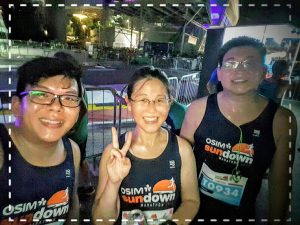 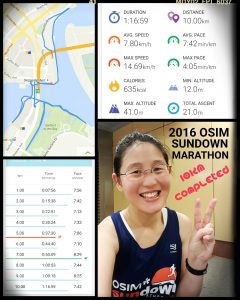 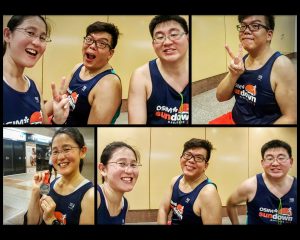 Overall, all of us enjoyed the race. Check out our happy faces as we were waiting for our train back. To run in the night and not have that heat factor does really help. You don’t feel soo drained like after a morning race. In fact the ironic thing was that all of us were super awake and afraid that we would not be able to sleep later because we were high from the adrenaline. Would I run for next year Sundown event? Well, that’s a very high chance I would return but we well see how it goes next year.

Till my next race review! Happy reading friends 🙂