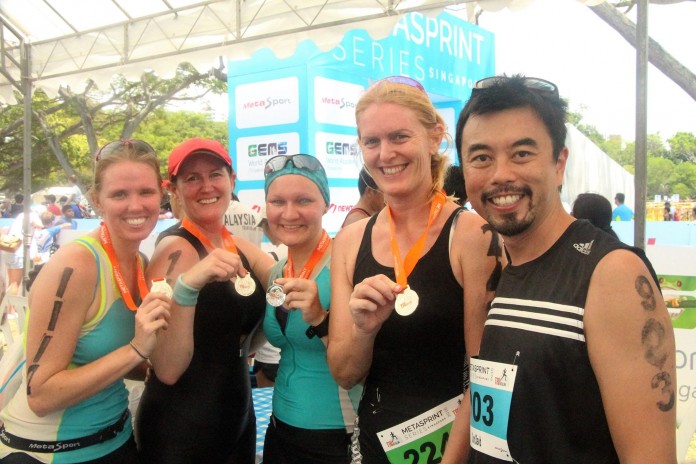 It was a hot one, with temperature reaching a high 36 degrees Celsius. With a late morning start, I can imagine the triathlon for the Sprint and Discovery categories would have been a tough slog.

Taking on the photographing duty, I suffered in the full sun alongside my participating buddies David, Michelle, Caitriona, Cindy and Lisa.

Whilst I missed David’s race as he started an hour earlier than the girls, I managed to see him briefly on his first cycling lap and at the end of the race.

I took the brunt of the sun watching the unusual “M” shaped swimming course for the Sprinters. With a choppy sea and strong current the swim was tough, slow and often knocked off course. As Michelle and Caitriona completed half the course by swimming into the sea, turn at the buoy and return, they needed to exit the water, run up the beach around an orange cone and then back in the water for the second half.

According to Michelle, the choppy water conditions created a bottleneck at the first buoy that stagnated for some time as swimmers struggled to push their way through the current. She also found herself pressed against the course rope in the congestion. Add to that dodgy goggles creating diminished visibility it was only natural that she would be pushed outside the course by the current. Caitriona seemed to have fared better and looked strong as she exited the water four minutes sooner, placing 13th in her category.

As they transitioned, I raced to the cycling track for their 3 laps of 6km each. A strong cyclist, we all anticipated Michelle making up substantial time and she didn’t disappoint with an average speed of 30km/h. Caitriona held her own with an average speed of 27km/h. I can imagine with a couple of tight corners on the course maintaining a high speed would have been quite challenging.

Onto the running stage. Due to construction on East Coast Park, the running course needed to be altered with 2 x 2.5km loop. Not the most appealing when as a runner you see the finish line but you need to turn and do another loop.

I took up position near the finish line and I waited for super speedy Michelle to barrel through with wide strides and a determined look on her face. Whilst certainly not her fastest run it can be understood when the run is tied onto the tail end of a swim and bike ride.

Three minutes later Caitriona flew through with her posse of girls. Joined by her three eldest girls towards the end, they were a vision to behold. The run looked like it might have taken the wind out of her but again after a tough swim and bike it’s to be expected especially since in cycling the muscles are used in different ways to running. Coming off a bike the muscles may feel like jelly and then the same muscles need to be further activated for running which typically requires more energy.

For Michelle and Caitriona this was their first Sprint experience and as challenging as it might have been I think I’ll be following them like the paparazzi in future triathlons.

Either way congratulations are in order to Michelle and Caitriona for their first Sprint Triathlon.

As Michelle and Caitriona were completing their cycling, I returned to the beach to watch Cindy and Lisa flag off. Fortunately for them, they only had to complete a portion of the “M” shaped route.

Of course it was no easier for them since they had to handle the same choppy conditions, except that it was for a shorter distance and less time.

Primarily a breaststroke swimmer, Lisa exited the water pretty strong and about a minute before Cindy.

However, Cindy made up her time on the bike, travelling at 28.7km/h and finishing in 25min with Lisa about four minutes behind. When they both took off for their run, they seemed to maintain the same steady pace of about 6.20/km, finishing the race exactly four minutes apart.

Once we all regrouped and obtained the live results it was to our delight to discover that Cindy took 1st place in her category. Of course we had to wait until she climbed the podium for the necessary pics and prize collection.

Even though it was terribly hot and some of us sported pink noses and burnt shoulders from the sun, we reunited poolside later in the afternoon for a celebratory drink and race debrief.