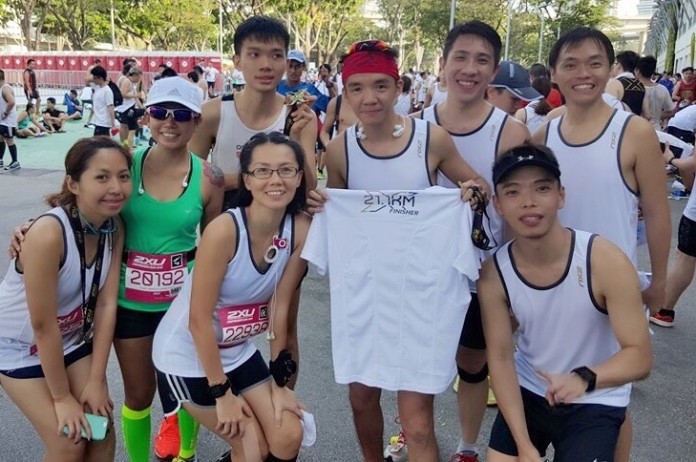 The most difficult moment today is finding the courage to take a bath after the half marathon. When the water falls on me, the spiciness just makes me wants to go !#%$@! I earned four abrasions in this run. I’ll skip the details on my abrasions but seriously it’s freaking pain machiam a pain score 8 and sadly I realised I actually get abrasions in all my long distance running! 😭 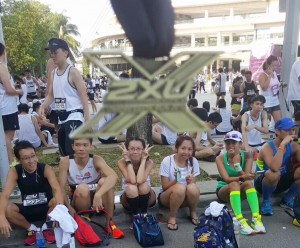 Its a relief when I get my finisher tee and medal. And of course the best part is the iced cold towel. Slap it on my face immediately. Now I think every run should give iced cold towel to the runners after the run, really so shiok lah! 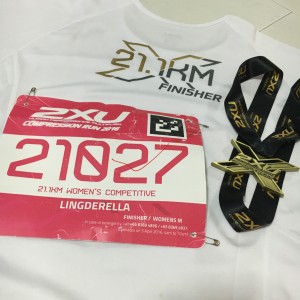 My race bib really “chui”, don’t know how I do it. I like the medal and finisher tee, although the tee is quite transparent and white can make me look fat but I used my sweat to earn it so no matter what it’s sibeh nice!

I had wanted to follow the 2hr30mins pacers for the whole race but I was seriously under training and lost them after 9km. Didn’t really run any long distance since standard chartered marathon last year. This is the 2nd half marathon I had in my life, this time my timing is about 10 minutes slower than what I did for GEWR last year, not too bad!

I’m obviously in desperation during the distance I’m chasing the pacer because I think a lot of bo liao stuff. I tried hard to regulate my breathing as I wonder if my breathing is too loud because the pacer in front of me did not listen to any ear piece 😂 I’m trying to stay near the pacers because it seems so easy to lose them, they are so fast(it’s just that I’m slow) Then I changed my focus to their balloons, see the balloons fly and sway and wonder when will it hit me on my face and burst.

After one of the drinking station, I lost the pacers. I’m a law abiding citizen, say nicely is want to bin my litter properly so I stopped, finished my drink then carry on but actually is want to stop and have a breather. It’s nice that before the run the organisers sort of reminded us to be considerate and care for the environment. The drinks at the drinks station is cold, give them a like! 😆

Although I lost the 2hr30mins pacers, but I set another aimed by telling myself don’t let the 2hr45mins pacers run pass me. And fortunately I managed to.

For the rest of the run I used the music I have to distract myself from paying too much attention to the run. “I wish that I could be like the cool kids, these are the cool kids they seem to get it”, somehow I think those sibeh can run ones are so cool! I really want to be like them, run fast, run easy! “Do it like a brother , do it like a dude!”, not just guys can run, many char bors can run also! Then I press next when the song came “Tell them what I hope would be impossible~ impossible~ impossible~” 😂 I really need motivation and positive songs to keep me going! 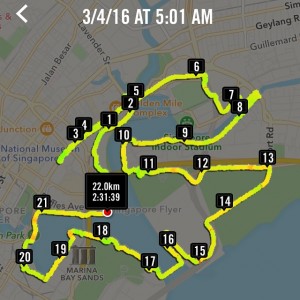 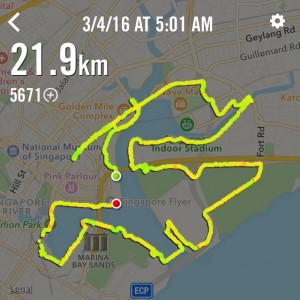 I don’t know why all the other runner’s fitness watch clocked distance of less than 21km by mine is 21.99km, which is nearly 22km! Maybe my running app got problem or maybe I don’t know how to run shorter path at the turns？

It was only 200m to the finishing point when I saw a girl gotten carried away in a stretcher, she was so close to the finishing line! I hope she got her medal and finisher tee, we all know she’s almost there! If according to my running app, she already completed the distance of a half marathon.

I don’t know in the end how I complete the run, every km seems way more than the actual distance and I feel like I had float or drift myself to the ending point. Or it’s just the music that keeps me going, with me arguing and agreeing with the lyrics. Or it could be I’m just very stoned that I should try to wake up earlier often and run at 5am.

I’m glad I got to know these group of runners who motivates and inspires each other to keep on running. Like I seriously gonna start walking when I’m heading towards Marina Barrage when Chiu Ping run pass me and waves at me to follow her. Although I can’t manage to keep up with her pace, but a simple wave really did a lot to stopped me from stopping. There was also a guy who give me a tap on my back, he was saying something but my music was too loud, didn’t manage to catch what he was saying but I am sure he is encouraging me. Simple nice gestures can be so powerful and encouraging. 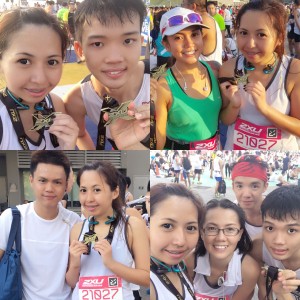 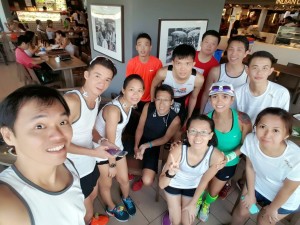 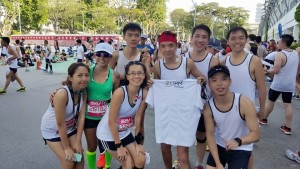 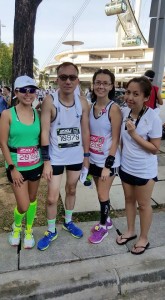