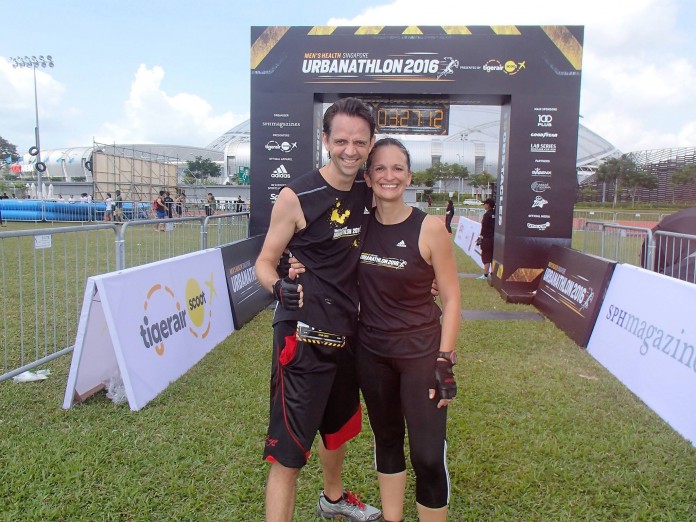 Whilst the 2015 Urbanathlon didn’t end well for me, what with a fractured talus bone and torn ligament 200m from the finish line, it didn’t deter me from returning in 2016.

Right up till the last obstacle, I was having a ball with John keeping me company throughout it all.  The injury was just sheer bad luck for me, that took several months of healing, followed by endless physio sessions.  However, it took me no time to register again for the 2016 edition, and with the usual level of excitement we joined the Urbanathletes for another round of climbing, running, crawling and everything else in between.

Somewhere in my cleverness I suggested we take a seat instead of wait near the pen not thinking how many athletes have joined the event and how many waves will take-off before we get our turn.  We ended up in wave 13 and started 33min after gun time.  We won’t be doing that again.

The distances between each wall were quite narrow.  We had to ask others to move out of the way so we could get off the top of the first and second walls.  It also diminished the momentum needed to sprint up the wall.  Given that John had to hoist me over the first one and pulled up the second, when I saw the third one, I just said “no way, see you around the corner”.

Sporting a bicep tendon injury from a gym workout limited my ability to rely on my upper body for this obstacle and the forthcoming ones.

As we rounded Tanjong Rhu, I expected to run towards the Marina Barrage but the route was altered from 2015 and found ourselves beneath Benjamin Sheares Bridge for Obstacle 2: Side Walk.  Reasonably easy at the start once I hosted myself up. With each section the setup changed and became more reliant on core strength and balance. The last section had my hands and feet only a mere 20cm apart making my body top heavy.  I was quite worried that I would topple over and land on my head.  So, I tightened my body, hung on for dear life and crawled to the end.

John being naturally athletic found it easier and figured walking as if on a balance beam would be quicker and easier than my approach not realising how wobbly the frame was.

From here we had to climb 5 storeys of stairs onto the bridge.  I absolutely hate stairs as I inevitably end up completely out of breath.  It was worth it though just to absorb the views of Gardens by the Bay, Marina Bay Sands, Marina Barrage, Singapore Flyer and the bay area. 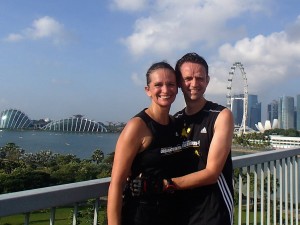 Descending the bridge we came across Obstacle 3: Swinging Fortunes.  They were swinging alright.  Climbing up on the truss and swinging like a monkey was definitely not for most girls.  Fully reliant on upper body strength, I took one look at it and said to John, “I’ll be on the other side taking photos”.  He made this obstacle look easy although he said it was tough holding onto the thin rods.  Even with gym gloves the rods were slippery.

And then there were some more stairs and incline running on Bayfront Bridge towards Marina Bay Sands promenade.  From here it was km after km of running with no further obstacles for about 4km.  Not particularly interesting and by the time I reached the 8km mark I’ve had enough.  With my energy bank emptied we ended up walking actually I think more like trudging.

We ended up so slow that when I wanted to give way to a cyclist to pass us he said “It’s Ok, I’m the tail cyclist”.  With shock-horror on my face intermingled with amusement I asked “What?! Are you saying we are the last ones?”, “Yes” he replied.  Well I’ve never brought up the rear in a race before.

The upside to being at the end is that you get the obstacles all to yourself.  It was like our own private playground.  By this time we just chose to have fun and maybe even pass the two participants strolling before us and then we won’t be last anymore.

When we reached Obstacle 7: The Network we caught up to a few other racers.  This one was my favourite last year and again this year.  Having fun on these wobbly ropes was quickly altered when I had to climb even more stairs around 13km mark.  By this stage I promptly sat down and cursed and somewhere along the way I heard John babbling something about a Vertical Challenge race.  I think I sneered at him as I hauled myself up and realised that clearly my legs need strengthening.  Maybe I should start with the stairs in my condo.  I’ve got 30 floors to work with.  I’ll think about it.

Perhaps my least favorite was Obstacle 8: Metcon Madness with its 4 stations of cross-fit exercises.  I didn’t find it interesting.  I can go to the gym for these exercises rather than pay for it in an obstacle race.  I hope it won’t be there in the 2017 edition.

As we reached the last obstacle, the Flying Fox, we were given the option to skip it which we did for several reasons.  One, we didn’t want to wait 20min in the blazing sun for our turn; two, holding onto a rope with an injured arm was not a good idea; and three, mostly we just didn’t want to get soaked landing in a pool of water especially since the Singha beer tent was beckoning.  We had our priorities straight.

Since we couldn’t enjoy the after race offerings last year, we made sure we did so this year sweaty rather than wet.

After a measly 2:50hrs (yeah super slow right?) we reached the end and I’m happy to say injury free.  We met some nice blokes from the UK and Canada as we huddled under the umbrella in the Singha beer enclosure.  We downed a couple of cans before breakfast and had a great yarn.

Overall, another nice event and we’ll be back for 2017.  Hopefully, stronger and fitter this time.  You could say we are hooked.