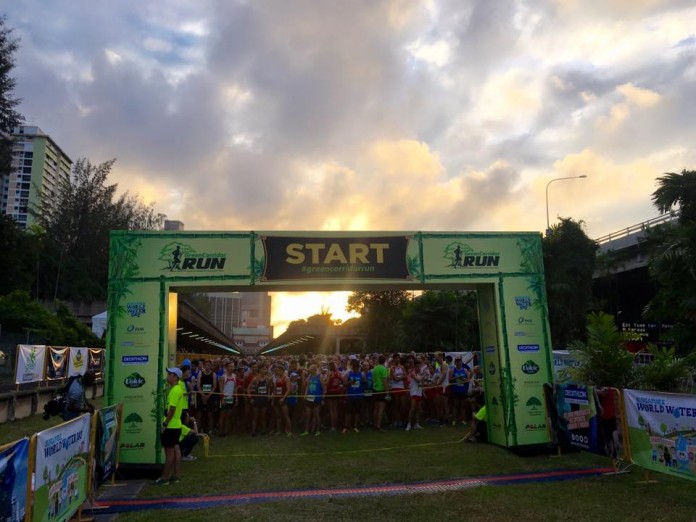 It’s been a good few months since I’ve signed up for a race after a painful period of non-recovery from injury. The decision to participate came after a miraculous recovery and subsequently an invitation from a friend to participate in the team challenge.

As with previous posts, do look out for the font in italics which perhaps you may find important in a race, just as I do 🙂

Race Entry Pack Collection (REPC) was held from the 26 to 28th February 2016, from 10am to 7pm each day at City Square Mall. I dropped by on the evening of 27th. There was a short and rapidly moving queue, thus taking me less than five minutes to grab my race pack. The race pack was rather plain – the race bib, the race tee and some other sponsors’ vouchers. There was a booth by Decathlon Singapore displaying some merchandise. The cheerful volunteers asked if this was my first time participating in the race and yes indeed it was! In fact it was the first time that I would be running along the Green Corridor route. “Then got motivation to run faster?” they quipped; “yah, my first and last chance to try this route!”

Less commonly do we find a race which is has a different start and finish point. This point to point race began at Tanjong Pagar Rail Station, before finally concluding at the old Bukit Timah Rail Station. Having met up with my team at Tanjong Pagar MRT, we took a 10 minute walk over to the start line. There were multiple trucks available for baggage deposit, making it highly efficient. In addition, there were tonnes of portable toilets available with hardly any queues.

The unfortunate aspect about most races in Singapore is that there aren’t race pens for runners to segregate themselves according to expected finishing time. Therefore, this meant that eager runners keen to position themselves appropriately often had to arrive significantly earlier than the flag-off time. I would commend the race organisers in allowing runners to select their approximate finishing times and thus be segregated into various waves, thus minimising congestion and improving safety. As my team was hoping to place well in the Team Challenge, we opted for the 8.00am start (the first wave).

At about 8.00am, we were flagged off. The race route took us all along the Green Corridor (as the race title suggests…). The route was largely flat, extending across grass, gravel and trail. There were some damp portions, though nothing particularly muddy. Though largely well lit (after all, the race begins well after the sun has risen), there were portions under expressways that could be deliberately lit to maximise safety on trail terrain.

Hydration stations were situated 3.5km, 5km and 7.5km into the race. One of my qualms would be that there was no isotonic hydration available, let alone chilled hydration. Yep, plain, lukewarm water was all that was available. Distance markers were religiously placed every 500m (if I recall), thus helping runners to accurately keep track of their progress and pace themselves.

One of the things I really liked was that as this was a popular race, photographers were everywhere! 🙂 Though a significant number were the official photographers (Marathon-Photos), there were many photographers that had made available their snapshots for free! Big thank you to all of them including Running Shots, RecoveringAddict Runner, Pictureart, Trail Running Singapore and any others I may have missed!

Participants were handed a bottle of Volvic mineral water and a Finisher’s Medal. Bananas, apples and cups of isotonic hydration were available as well. Baggage retrieval thereafter was sadly, less efficient that baggage deposit.

Last but not least, Race Results were promptly released the day after the race!

That’s about all for me for this objective review. For my personal experience and thoughts of the race, you may check out my personal blog here (: