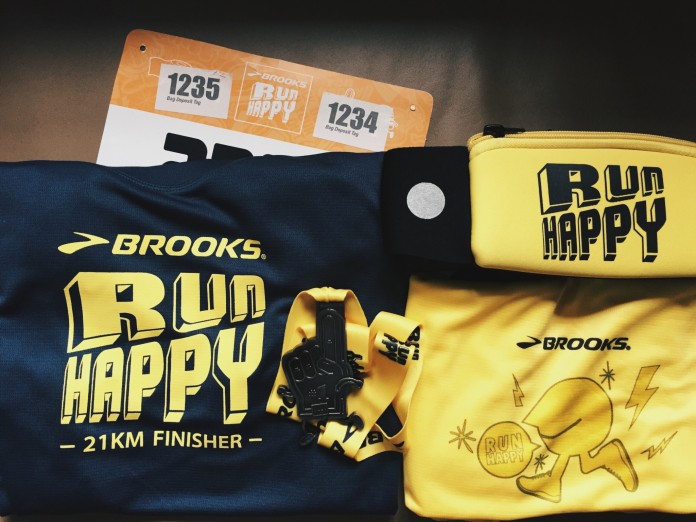 After a long hiatus from running, I finally got the chance to don my running gears and head out to East Coast Park for the Brooks Run Happy Half Marathon on 17 January 2016, flagged off at 5:30am. This is my first time running a half marathon race and also my first race event of 2016! Seems like my running resolutions for the new year ahead is off to a great start.

As i was overwhelmed with work during the past few months, I ended up missing out on both race pack collection dates and was worried the night before that I might not be able to participate. Thankfully, race pack collection was still available on race day itself. The reason for choosing this race is because I wanted to try out a half-marathon distance over a race route that is not too complicated, with moderately flat elevation.

Marketed as a ‘carefree, casual 21KM run‘, this race ranks runners according to nett time instead of gun time. In a way, this takes off some anxiety from runners regarding race ranks and timings as there is no need to squeeze all the way to the starting line in hope of running as close as to the official gun time. Another ‘happy’ element I observed were the Brooks race singlets where participants would get one of the 4 random designs, adding an element of fun.

Initially I was slightly worried about having insufficient hydration for the 21k distance as I was not armed with any personal hydration at all. However, I was extremely glad that there were sufficient hydration points with drink choices including chilled water, coconut water and one station of energy gels for the 21km participants.

Towards the last 2 Km or so of the race route, there was a slippery muddy U-turn point where we had to get our shoes soiled and dirty. No idea why it was like that but it did break the momentum for most of us. As for the way back to the finishing point after the U-turn, it felt both psychologically and physically draining for me. I kept looking out for the finishing point banner and struggled to keep myself running. I guess that’s the price to pay for the lack of proper training prior to race day and inconsistent pacing.

I crossed the finishing line together with another lady who hi-fived me and we patted each other’s back to congratulate ourselves for finishing. Throughout my race, I was also being motivated by pacers, runners and volunteers alike. It was really a heartening sight to see runners in Singapore being so friendly and encouraging to one another, regardless of their background, running profile and culture.

I received an SMS notification from Racetime shortly after i’ve finished my race, informing me of my unofficial timing. This is a really great feature that I’m sure many runners would love and it has been used for many other races too (as you can see from my previous SHVM 2015 sms hee). My garmin GPS watch and Racetime chip timings were exactly the same, so I guess it’s rather reliable and accurate!

All finishers were given an adorable finisher’s medal with a No.1 sign, a bottle of coconut water, cookie, dark navy blue finisher’s tee and doughnut. I really like the design of the medal as it makes all finishers of the race feel like a winner.

Well, 21km is definitely not the same as simply doubling the energy, effort and perseverance of a 10km race and there is much more for me to work on. I was targeting for a 2:00h finish and I think if i minus out the times when I stopped and pushed myself harder, it would be a possible goal. Nonetheless, I was glad to have made the first step in any case by going beyond my comfort distance of 10k. I hope everyone enjoyed their race as much as I did and hi-five to you if you are doing your first half marathon distance or race of 2016 too!