Looking back, it seemed like it has been a very long year. I’ve just started running regularly at the park featured above,  in late 2014. But I had surprised even myself as I looked at the box of medals I’ve collected for the past 12 months or so.

I counted and there were about 23 distinct days of challenges (races/runs/rides etc) in 2015: 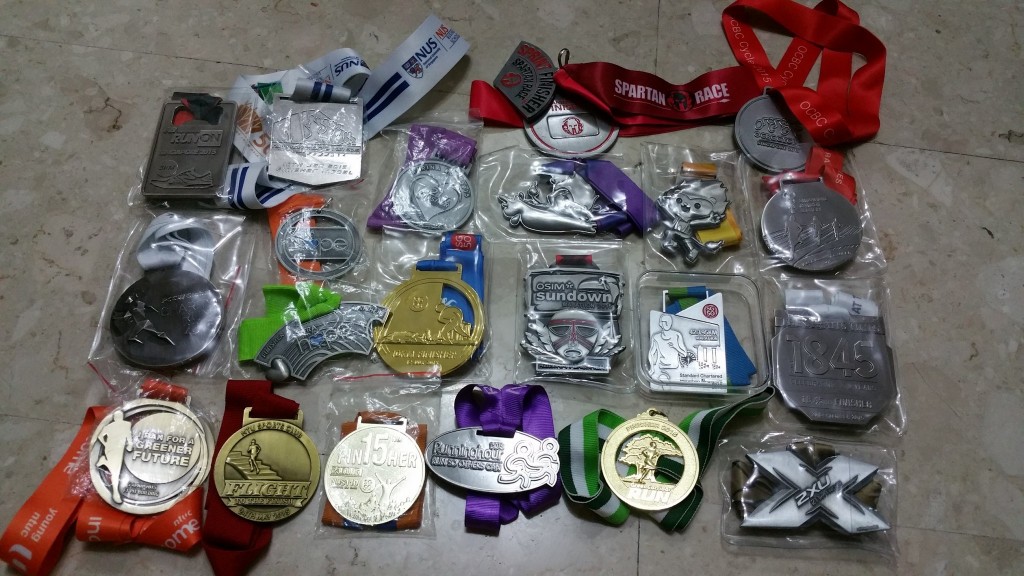 The running passion started more seriously with a 10 km race that I took with my younger son in the ST Run 2014.  Before that, I had done a 8 km race early that year but didn’t do anything much for the next 6 months or so.  Then I started to think perhaps I should now attempt my dream of running a marathon in 2015.

And things started to roll then as I signed up for races to goad myself to keep going.

1. To start on anything, take the first step, and one small step at a time.

So maybe start with a dream, a wish or simply a resolution. I’ve wanted to experience a marathon for a long time but didn’t think I could do it in the past 2 decades or more.  I told myself to run a marathon by this year.  Then I just went and signed up for a ‘small’ race.  Well, I signed up for a few races later to keep myself going forward.

Put the bar a bit higher each time so you can improve.  So I did a few 10 km races and then signed up for my first half marathon (Brooks Marina Run) in Feb next which almost ‘killed’ me.  I ran with very few stops at the hydration and didn’t consume anything throughout the distance, not even energy gel because I had not done my research.  My mind was just focused on finishing.  I finished feeling very hungry and tired but with a sense of achievement in finishing first half marathon in 2:43:18.  About a month after, I ran my best 10 km, 1:01:16:9 in the Running Hour 2015.

I have never run more than 5 km race at a stretch my whole entire life before last year.   And those 5 km are ‘forced’ cross country events I took that can be counted on one hand in the past in my teens and early 20s.  Soon I managed to complete 3 half marathons, best timing was 2:27:23.93. 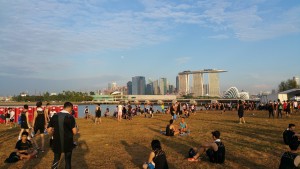 I tried a Vertical Marathon (OCBC 63 storeys, 18:47:69.7), wanting to accompany my younger son again.   Then, I thought I would try swimming with running, and Nila Aquathlon (intermediate) came along.  But I still took small steps – it was an intermediate race, so it was only 500 m swimming, but in the open sea (so my first race in open sea), and 2.5 km.  Then I went for OCBC’s Sportive Ride which was 42 km cycling.  I had my big fall on the bike (first injury) but picked myself up and then went on – never worn a helmet while cycling but the helmet saved my head as I hit the ground hard.

5.  I also learnt that ignorance can be blissful too.

In the midst of all the signing up and novelty of ‘new stuff’, I ended up a challenge of a different kind as I had to complete 4 challenges in a span of two weeks between 24th May and 7th June at one stage.  Fortunately I completed all 4: Vertical Marathon, PCCW Global Run (5k), Nila Aquathlon and Nila Run, the latter two taking place on consecutive days, without much mishap.

6.  And then Spartan Sprint caught my attention.

I thought why not, at most I would try to do the burpees.  Still, I found the burpees more tiring than anything at my age.  I must say I enjoyed the Spartan Sprint though I completed in 2 hours 13 minutes and couldn’t complete 4 obstacles including the spear throwing.  So I had to do the 120 burpees but cleared all the other obstacles.  It was an exhilarating race which requires all parts of your body to be in synch !

7.  Marathon is an interesting ‘beast’.

You conquer one, it doesn’t really mean you can conquer the next one in the same way.  I learnt that with Sundown and Standard Chartered Marathon.  I thought I had learnt my lessons in Sundown, my first full marathon 6 months too early.   It was the first time when I witnessed all runners of different shape and age, finished and took the well deserved rest but all with that smile of achievement at end of the day or break of the dawn that morning.   I had to learn new lessons actually in the Standard Chartered Marathon and even went beyond my 6 hrs 13 min which I thought was a long time already.  This time round, I wasn’t prepared for the unforgiving sun and my not so seasoned shoes.  Still that sense of achievement is there as you covered the last few metres to the finishing line.

8.  Pain is inevitable, suffering is optional.

Often said in sports world, made famous by Haruki Murakami.  You have to pay a price for each race.  The price is usually the efforts you spent on ‘training’, preparing for the run.  The less you prepare, usually, the higher opportunity cost you give, ie you took longer time to complete the race or your muscles or parts of your anatomy will knock on your consciousness.  And so I thought I’ll give myself a well-deserved rest, recovering from 3 black toe nails.  But I’ve decided to go one more 10 km this coming Saturday. 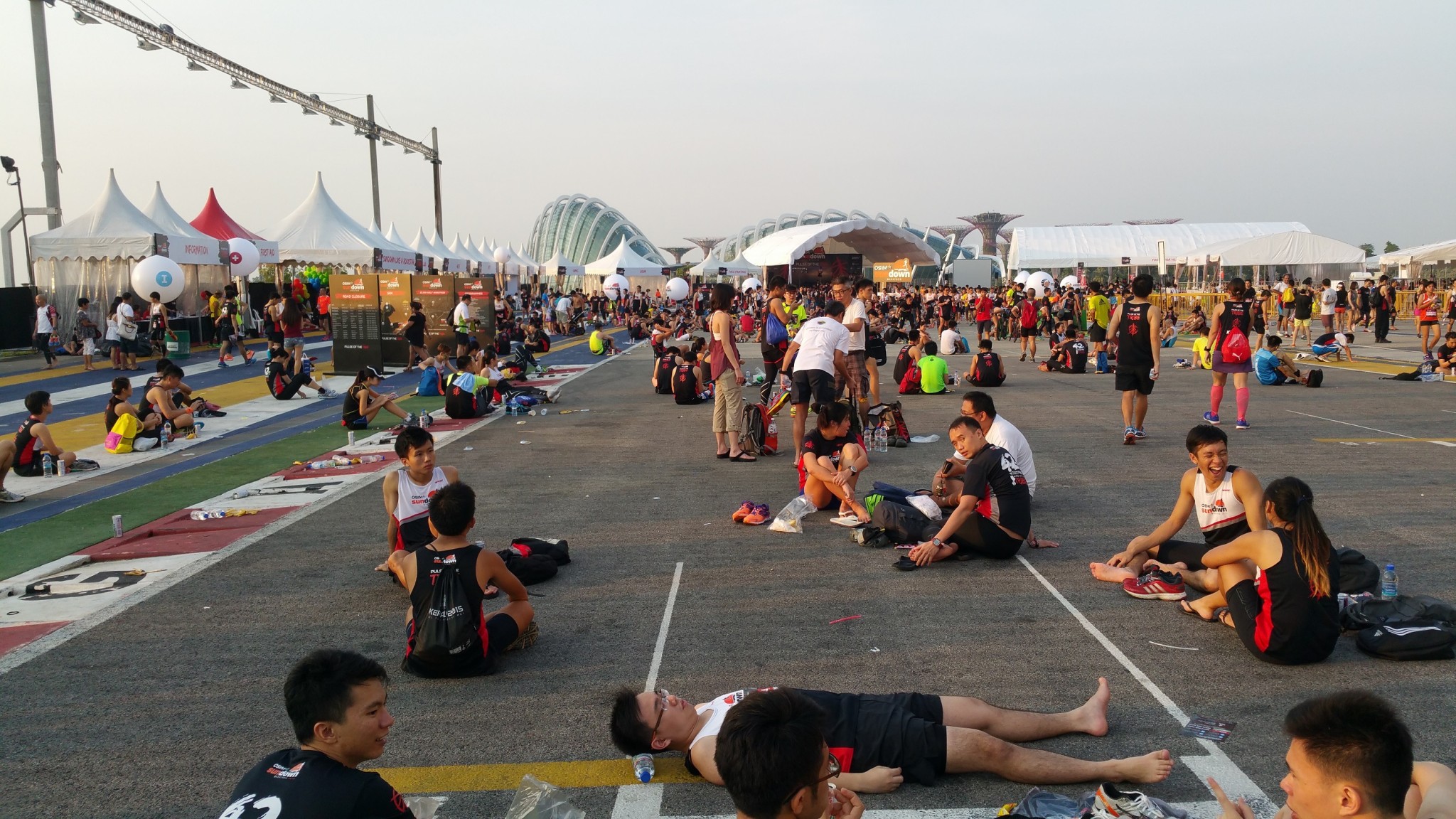 And so, with the combination of the naivete of a first timer with not as much time to go at this age, I had done a whole lot of activities than the rest of the previous 5 decades put together.  Carpe Diem !  Where there is a will, there is a Way.