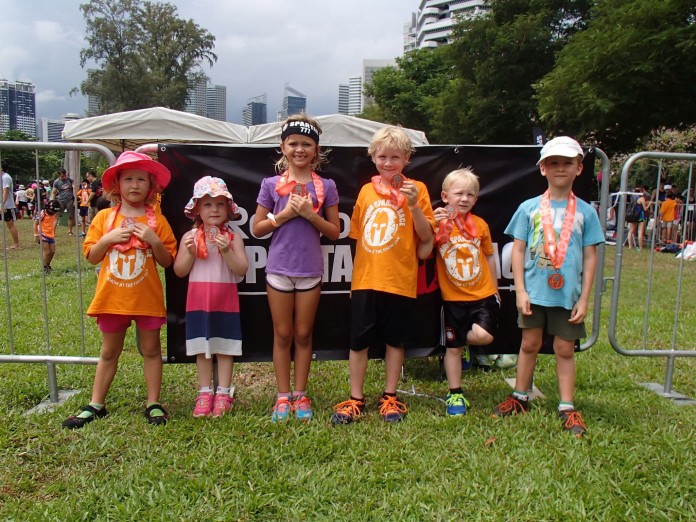 With limited obstacle races available for both adults and children, we welcomed the inaugural Spartan Race to the racing calendar.  Started in 2010 in the United States it was quickly franchised internationally finally reaching the shores of Singapore this November.

Our Little Leaguers Trinity, Justin and Leo had their first taste of an obstacle race in May when they completed the 1.5km and 3km Energizer Obstacle Race.  Six months on and they were super excited about another opportunity to climb, crawl and run their way through another course.  This time they were joined by siblings Emmanuel and Stephanie and our littlest princess, 4 years old Michaela. 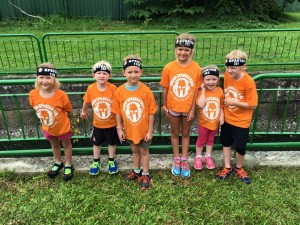 Split into age categories Justin at 8 years had to complete the full 1km course. Trini, Emmanuel and Stephanie were in the 5-7 category who completed the 1km as well but not the full course.  They raced the 0.5km course by completing it twice.  Michaela and Leo at under 5 were joined by their mummies, Angela and Michelle (the only category that made parent participation compulsory) to complete the 0.5km course.

All the kids were in the morning sessions, taking off at 20min intervals in their age specific category.  Michaela and Leo were first off the ranks.  A bit of mayhem ensued with large numbers of children and parents tackling the obstacles when somewhere along the way a parent was injured falling off an obstacle.  We couldn’t understand why the parents had to participate in the obstacles given that they were designed for children’s sizes and not adults.

Whatever injury was sustained by the adult, it took a while to get him off the field thereby delaying the following waves by 15 min.  The 5-7 age category had parent participation as optional but given what happened with the previous category, that option was scrapped.  All along my daughter thought one of us will join and in the last minute we had to explain that she was doing this race by herself making her a little scared at first.

As John and I made our way to the side of the course to get a better view of our girl we were grateful she chose not to wear the race tee as she was easy to spot in the distance and easy to follow on the course.  She was doing remarkably well in conquering the obstacles, grinning ear to ear.

The course started off with quite a lengthy prone crawl exercise, followed by a couple of A-frames and then onto climbing cargo-nets.  The next three obstacles consisted of “Over-Under-Through” series of obstacles in which the kids had to first climb over a wall, then under a wall, then through a square hole placed in a wall finishing off with a final sprint.

Justin’s course was slightly different in that he had a couple of extra obstacles after his prone crawl exercise and longer distance to run. He had to carry a sandbag for a  distance, followed by another prone crawl through what might have looked like a black tunnel.  Whilst the sandbag obstacle tired him out somewhat, just like any kid who loves crawling about once he resurfaced from his tunnel he was off and running at full speed again.

Within a couple of hours they were all done.  With finisher medals in hand, it was time for some much needed lunch and then off to collect the Santa Run for Wishes race pack.

As adults we can be more judgmental about the disorganisation of an event such as the mess up with the scheduled waves, race tees for the kids missing and inappropriate location for the race pack collection.  The tees had to be collected on race day waiting in appallingly long lines in the rain.  However, as Michelle put it the kids had a lot of fun with it and whilst a bit messy and disorganised she would let them do it again.  I happen to concur.  Hopefully by next year the event organiser will have ironed out the kinks for a smoother operation.

Trinity also wanted to capture the essence of her race in writing and have it published like her mummy.  So below is her take on her experience, in her own words (except mummy fixing spelling/grammar errors).

It was today, November the 15th.

After the race we had lunch, got some ice cream and then came home.