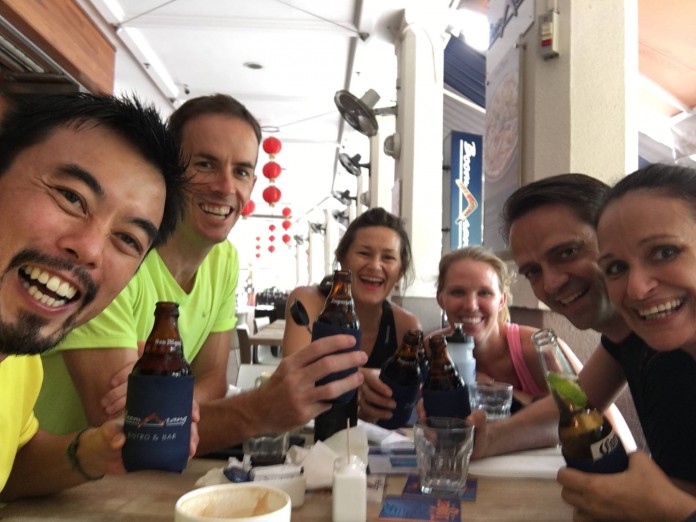 Haze, haze and more haze.  That was September and most of October.  Our September scheduled Team Costa run was cancelled.  The air pollution index was so high that we all just rolled over and went back to sleep.

As the haze eased up we snapped up the opportunity to tackle our 7th run in the series with an easy or what was meant to be an easy, meaning short, run around Fort Canning.

But why on earth I thought it would be easy beats me.  I should remember last year’s SMU Mile race at Fort Canning.  The 4.8km was pure torture (and only my second running race ever).  Hills, stairs, hills, stairs, more hills and more stairs.  Well it was tough for me but I wouldn’t say the same for Michelle.  Whilst I was hyperventilating from exertion, she was chatting on the phone as if she was taking a stroll.  I did still manage to put on a fabulous smile for the photographer. 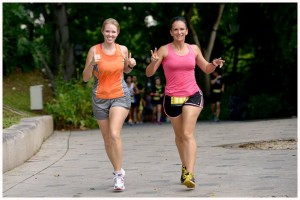 Anyway, after a brief from Chris regarding the route, meet-up, options, Vika, Michelle and I took off up the endless tiers of stairs just to reach Raffles Terrace and double over to catch my breath.  What a way to start.

No matter how hilly, how many stairs or how tough it is for me to run this terrain, Fort Canning is a special place. Historically, besides Sir Raffles building his first residence and the first botanical garden on the hill, Fort Canning is largely remembered for its military role complete with barracks, hospital, fort and arms store.  It held this role for a century having passed hands from the British to the Malay to the Japanese (not a good time), back to the British and finally where it belongs in the hands of its people, the Singaporeans.

Now a park in the downtown city area, Fort Canning is a “unique blend of historical relics, lush greenery and expansive lawns”.

Gothic gates, art installations, 9-pound cannons, archaeological excavation site are just some of the attractions that reside amongst the sky-high tree and shaded paths.

Shortly into the run, John and I split from Chris, Michelle, Vika and David.  Perennially the slowest in our group, I opted for a shorter route but my appreciation of the park and all its interests has caused far too much distraction and ultimately we just walked, photographed and enjoyed the glorious morning.

The others on the other hand figured the park hills not enough of a challenge and on Chris’ brilliant suggestion agreed to run up the stairs, then up a hill, then down the hill and around again.  If that wasn’t enough a few lunges, step-ups and sprints were tossed into the mix.

Not surprising by the time John and I caught up with them, they looked as if they ran a marathon even though it was only 7km.  Then again it’s 3km longer than what John and I completed.  Ah, if I wasn’t so easily distracted by the scenery around me.

We finished off with a short jaunt to Boomarang Restaurant at Robertson Quay to inhale a hearty breakfast and down a pint of fresh orange juice and some beer of course.