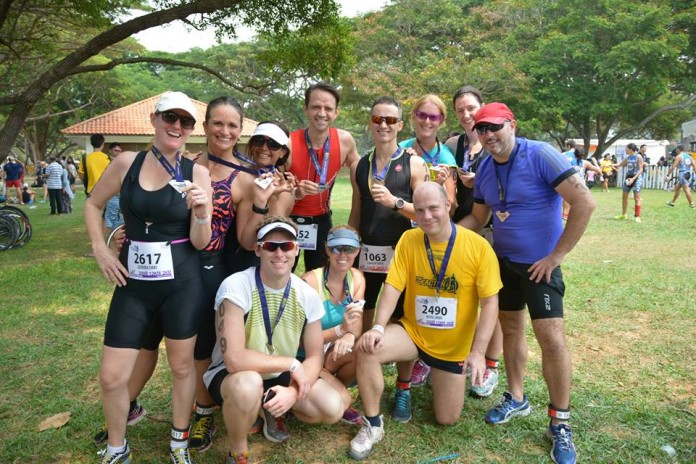 This blog may be a few months late but it really needs to be written for posterity.  You know, one of those days when most of us Team Costa members have dispersed to other corners of the world and we’ll want to reminisce about those good old days in Singapore.  We’re not just amateur athletes training and racing together; we’re friends, we live in the same condo and we party very well together with plenty of poolside encounters.

We’re also a very diverse group representing: Australia, South Africa, Canada, Netherlands, United States, Wales, Ireland, England and New Zealand.  Ok so really with the exception of Netherlands we are basically English speaking countries of some kind but we did cover 4 continents.

What makes this event really special out of all the races we’ve participated in is that it is the largest participation by Team Costa in one event.  We covered all the categories from Freshmen x 8pax to Sprint x 2pax to Standard x 1pax.

The race itself wasn’t a piece of cake though.  The Freshmen swim was a mere 200m.  The course was in a kinda rectangular layout measuring 100m which meant we had to exit the sea and run along the sand to re-enter down the other end.   That would typically be ok but this time the sea was so incredibly uncooperative with extremely choppy water and shallow depth for the longest stretch of the course (we could put our feet down if we got tired in the middle of the swim) that the entry point meant that we had to run pretty much to the first buoy and only started swimming after the turning point.

Quite honestly, I was stuffed by the time I came out.  Like my fellow Costans it felt like we did battle with the sea and the sea won.  Bedraggled and crawling out of the water I made my way to the bike racks for the next leg of the triathlon and I could’ve done with a coffee break to recover from the swim.  Michelle on the other hand was like a machine, just powered through the transition area and just simply disappeared.  I think I was barely getting into the run phase of the race and she was already finished.  I think she had the coffee break waiting for me to finish the race.

When I consider that I got overtaken on the bike by Caitriona, Maree, Avni and Cindy and three of those ladies have only just completed the Singapore International Triathlon the month before.  Really they should call me the ‘sloth’.  If I was any slower, I’d be parking.  Gotta see the humour in this.  A garden snail could’ve overtaken me.

Anyway, these ladies were amazing.  With extremely limited triathlon training and for some no training at all, they topped the charts.  For the Freshmen female open category (28 participants) Michelle took 1st place, followed by Caitriona in 5th, Maree 7th, Avni 8th and Cindy 10th.

I’m grateful I was old enough to get into the vet category so I have my own class and managed to come in 6/10.  I survived the bike (just) but for that run, all of 2km.  You know you ain’t got it when you keep getting overtaken by senior citizens and what’s worse coming in last amongst your friends, they band together at the sideline and shout  and holler “woohoo!!”, that you know everyone is watching and I just wanted a mighty big hole to open up and swallow me whole.

As for the Freshmen boys well John made leaps and bounds from his last experience the year before, where I’m sure he broke the world’s longest transition between the swim and bike by taking just over 7min.  He made a marked improvement this year by transitioning within 4min.  I wonder if that’s due to the flack he’s been getting from his mates for the last 12 months, since no one has forgotten yet.  Overall he did ok.  Came in 35/91 but couldn’t expect much when he was just winging it.

Michiel on the other hand, whilst he placed 27, it was not a bad effort for a first timer.  Michiel is a swimmer by nature and I suspect the unappealing element of the swim phase didn’t impress much.  The cycling and running were just part of the game.  Perhaps the Trifactor Swim race would be a great challenge for him next year.  Let’s see.

Moving onto the Sprint category we have newbies Paul and Ian.  Ian is a fitness afficionado.  With a triathlon and several runs in the UK under his belt, he’s no stranger to competition.  This triathlon was his Singaporean debut and I’d say the humidity may have played some havoc but not enough to deter him from coming in at 12%.  Now, I remember him being hard on himself but he went straight into a Sprint when most of us have to get out of Freshmen. I say thumbs up for an awesome effort.

Now Paul, this is one man who doesn’t just live life, he absorbs it whole.  He does one mini-triathlon the month before and says that’s just too boring, too easy (sigh, I wish, I barely survive them) need some grunt if he’s gonna bother getting out of bed to race, so what’s he do.  Goes straight into a Sprint triathlon.  The swim goes from 200m to 750m, the bike from 12km to 18km and the run from 2km to 5km.  With a busy schedule, four kids and an abudance of living, I’ve no idea where he fitted in the training (if any); but check it, he still wings it and makes it into the 30% percentile.  Next year it’s the Standard for you my friend.

And this brings me to our hero of the hour.  Stanislav is a consistent trainer.  It first began with running and training for marathons.  Somewhere in the last couple of years he discovered cycling and with regular round-the-island trips, a couple of gran fondo tours, bi-weekly 50km round trips and he’s never looked back.  Just one small hiccup and that’s the swimming.  His least favorite but one that he needs if he’s going to do a Standard in the Trifactor where the swim is 1.5km.  Stan was the only crazy who went all the way to Standard and came out on top.  With over 500 participants he topped it at 23%.  That experience incensed him further by registering with is buddy Chris for the Laguna Phuket Triathlon in November consisting of 1.8K swim (in open ocean), 55K bike (across two major hills) and 12K run.  Of course the haze hasn’t helped with the training, so I say good luck, cause you’ll need it.

The triathlon concluded the Trifactor Series and Michelle, John and I were the only participants who completed all of the races in this series.  As a bonus we received a display case to store our finisher medals along with a personalized plaque.  To add to our overall experience Michelle adds a 3rd place in the 35km Bike event (F-Open Cat) as for myself, I took 2nd place in the 500m Swim and 1st place in 21km Bike event (both F-Vet Cat).

On a final word, Team Costa is made up of a group of amateur athletes with families, commitments and other interests; the races are mostly for fun with some elements of seriousness but not too much.  It gives us objectives to train towards and keep fit; and it ensures we don’t get too bogged down with the daily grind.