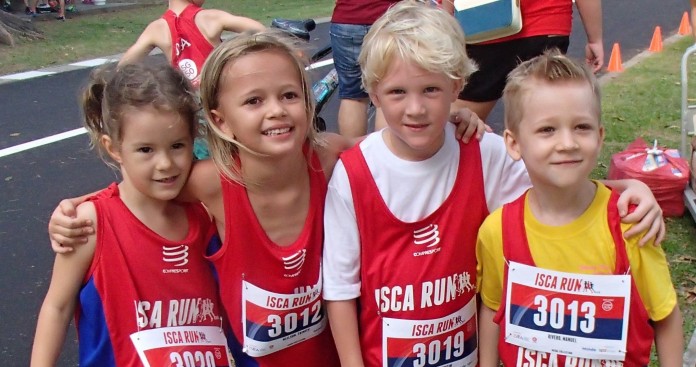 In the last 18 months Team Costa has participated in multiple running, cycling, swimming and multi-sport races. We enjoy the atmosphere, the challenges, the accomplishments and accolades from our friends and families.

Somewhere in the middle of 2014 the idea of exposing our kids to sports took hold and Little League was born.  A parents organised sports games day held in our condo. At Little League the kids learn sportsmanship, winning, losing (although they struggle with the losing still), athletic skills whilst hanging out with their friends.

As time passed greater challenges were needed for some of the older ones and in came the racing world.  A recurring contingency of five Little Leaguers have tackled running races, obstacle races and swimming races.

The distances are increasing.  Where once they raced in 750m dashes some of them have already worked up to 6km races.

Here are some highlights of our Little Leaguers’ journey in the world of racing for the last 12 months.

An annual race completely geared towards children only, it is a sell out within weeks and much anticipated by children, especially those who have done it in previous years.

Besides a race pack full of goodies it is also a timed race for the individual category with prizes awarded to the top three finishers in each category.

The largest running event in the western region of Singapore, JLR’s running route is nothing short of spectacular.  The 2.4km winding path whilst often narrow is easily overcome with the fun and non-chalant spirit of a child.  Running through Japanese and Chinese inspired gardens, past pagodas and across arched bridges is a visual feast to any participant.

Where else can you join the armed forces as a foreigner other than on a running field.  How about a bonding session in the Father and Child 800m category with matching tees.

My daughter often requests her daddy to wear the SAFRA Superdad tee whilst she’s wearing her Superkid tee when participating in Little League.

An event of gigantic proportions it drew more than 53,000 participants in 2014.  Adults aside, the 800m kids dash (which is actually closer to 950m) is a one way smash from the Esplanade Bridge via the Fullerton Hotel and all the way to the Padang.

Unless the parent is joining the child in the run it gets a bit dicey to manoeuvre the kids to the start line and get to the finish line before the kids do in order to collect them.  Due to the size of the race extra alertness is necessary to ensure the child does not get lost or separated from the parent.  Part of it can be mitigated by giving the child tips on what to do should they end up lost.

A massive 6km run for any young child (most of our Little Leaguers are under 8) but the opportunity to run through the Night Safari during the day, followed by the Singapore Zoo is a chance not to be missed.

A super cool finisher medal, tee, zoo towel and free entry into the River Zoo on the day makes the trip to Mandai and the registration cost value for money.

We packed in animal observation in all three zoos, waterplay and the race of course into one day.  Who says kids aren’t tough enough to survive an action-packed day.

A great afternoon out.  Bring a picnic to enjoy the surroundings and family focused carnival. Lots of prizes can be won at the carnival games and the water pistols are part of the race pack.

Wind your way through the garden paths and fire your water pistol on unsuspecting pistol bearers.  Hide behind trees and spring out shooting with all your might.  Stealthily sneak up and fire at close range all the while making sure you’re getting wet whilst pretending otherwise.

A 3km race interspersed with nine obstacles on trail grounds.  Since the Little Leaguers were ready for something more, this race gave them: hurdles to jump, tyres to hop through, angled ropes to climb through, a grid of ropes for prone position crawling, a mighty slide to tackle and finish off with a high net crawl.  This is like the kids version of the Urbanathlon.

Filled with multiple physical challenges it would have been easy to choose not to complete an obstacle.  With patience and perseverance however, each completed obstacle was a notch on the confidence belt.  Watch the child shine from within when he/she knows what has been accomplished during that time.

The only disappointment is to the spectator.  Given it’s trail location in Mandai, the spectator doesn’t see any part of the race including the finish line as the rail guards are fixed too far away from the Start/Finish line.  Lucky hubby had the camera with him to capture all the great shots I was able to share in after the race.

A 750m kids dash, the race was the first opportunity where my daughter (6) and her friend Justin (7) were running their first race completely solo.  Given that it was at Big Splash it was basically our backyard and familiar territory for the kids.

The race organisers started off well directing the kids, dividing them in appropriate age groups and directing them who to follow during the race.  Expecting a looped race so that they may cross the finish line and return to their parents we were somewhat surprised and disappointed to find out that the route was in one direction and ending at Parkland Green (the route was not mapped on their website nor in the paper leaflet and no indication was given that the children would be having a one way race).  When I asked how are parents supposed to collect the kids and do they all know, the volunteer just shrugged his shoulders.  My husband along with our other participating kids’ parents had to run the race as well.

By not looping them back to the finish line the timing chips on their bibs were never activated.  This could easily have been a timed race for the kids and a successful event had they considered all the elements of the children’s safety.  Justin who came in first could have been a recipient of a first place prize just like the adults.  If children are to be the next generation of runners then they should be treated in the same manner as adult races.  They learn by example then we should lead by example.

Given that the kids ran back and the finisher medal was their target to keep them going they ended up completing 1.5km instead of the official 750m.  Thankfully, they had a ball and mostly unaware of the disorganisation.

I wouldn’t write this race off.  It is a great location and it’s small which is nice when compared to some of the behemoths out there.  However, I would hope the organisers find a way to ensure the children’s route is better laid out.

Whilst the display cabinets, hooks or drawers are filling up with finisher’s medals and the cupboards with tees, the highlight for these kids are the shiny, gorgeously designed medals they proudly wear after each race.  One day the children will move elsewhere or return to their home country and may never participate in races in the way they do here but the memories will remain in the medals they treasure and the photos that are taken.

So to wrap it up here are the highlights of medals so far proudly worn.