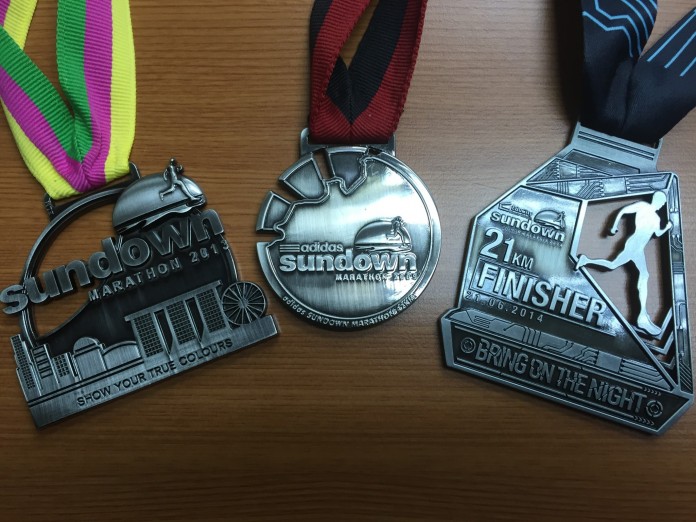 Once Upon A Time

Back in 2008 when Sundown Marathon started, I was not into running. But as the hype from the event drummed up, I was tempted to take part but alas there were no slots left in the categories suitable for a newbie like me. The ‘damage’ was already done as I started to look out for events to participate. By September, I clocked 2 10km events, giving me the motivation to up the ante to 21km. Consequently, in December 2008 as I neared the finishing line of my ‘inaugural’ half marathon, I told myself that I should go for a full next. I signed up for Sundown Marathon 2009 and started training in early January, clocking training distances which were further than my first 2 (10km) races.

While I was prepared for the long runs, I was not prepared for a health scare. It started with constant twitching of my eyelid as well as an inability to sweat on my left side of the face. When I went for checks I was told that I actually had Horner’s Syndrome (it’s real – go Google it) since I was born – something which nobody knew. But even with that the doctor was worried that the sudden onset of the symptoms – which I had strangely never experienced, it could be something worse. Thus started a series of tests, X-Ray and even an MRI scan before confirmation I was fine.

Through it all, I continued running, keeping water available to keep myself cool due to the inability to sweat. I even changed my route to run in loops so that the water could be ‘kept somewhere’. As I looked back, I also wonder what kept me going – perhaps it was just a wish to keep going and finish something while I was still alive (there were definitely morbid thoughts during that period).

Race day came on 30th May 2009 and start point was at Changi Beach Park. With the training clocked I was quite confident of finishing – the question though was how long it would take. From the start, the run was along Changi Coast track before hitting the coastal park connector. It was along this stretch that I realized I might have done my preparations wrongly. Firstly, I had hardly ran at night after 2359hrs. Secondly my belief that it would be easier to run was wrong as it was more humid. Thirdly, in the park connector the trees were fighting with us for oxygen!(OK-Maybe it was the humidity) To cope, I basically slowed down and told myself that the aim would be to complete while the sun was still down :p

The run moved to the Siglap park connector before cutting through Kembangan and making it across the PIE and then to Bedok Reservoir before heading to the Tampines Park Connector which lead to another expressway crossing – this time across Tampines Expressway to Pasir Ris. From Here it was towards Loyang before the final stretch at Netheravon Road before ending back at Changi Beach Park.

I didn’t make it back before the sun rose but I keep my first 42k to under 7hrs and earned my first marathon medal and finisher tee. It is something which I still keep and have in good condition and whenever I am feeling ‘vain’ – I wear it out. Perhaps it was my first marathon or the journey in those particular few months that place a value on this finisher tee.

Looking back at this run, while it did seem abit boring at that point in time, the run through the housing estates at Siglap, Kembangan, Bedok, Tampines and Pasir Ris in the wee hours of the morning was something very unique. And runners being the discipline lot we all are, didn’t really wake the residents up!

More Sundowns (and my life milestones) Since then I have taken part in a few other Sundown events and strangely enough all had some significant ‘milestone’ tied to it;

Sundown 2013 – Did a half marathon a day after returning to Singapore after a 2 year stint overseas.

Perhaps there is really something about this run which makes me join it almost every other year. I guess it’s typical of runners – ‘I won’t do this again’ but somehow just keep coming back for more.

Before I end my reminisce of Sundown Marathon, just a couple of tips for anyone doing it for the first time.

II) Get Used To Running At Night – Most people will claim they run at night and hence should not be any problem. However unless you are a regular party animal, chances are you are probably sleeping at this time which you are running on race day so if possible slot in a couple of runs in the wee hours (best done with someone for safety).

III) Keep Your Eyes Open – Sounds like common sense again but senses tend to dwindle during those hours so watch where you are going – have heard of cases of runners running into lamppost or the runner in front.

It is really not as easy as it seems – Based on the earlier 3 points, it must be noted that running a half or full marathon at night is not necessarily easier. As I found out myself, it is tougher than a day (morning) event.

Hopefully what I mentioned helps – so see you at the finish line!