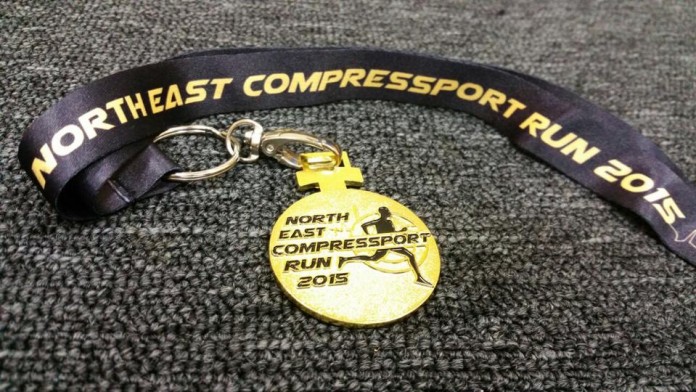 Ring….ring….my trusty alarm clock rang at 4am.  Jumped out of my bed and started preparing to move out.. Had my breakfast consisting of two pieces of bread and peanut butter.  Changed into my race attire and did some light stretching before leaving quietly at 4.45am.  Don’t want to wake up my wife and kids….

It was a long drive to Punggol Waterway Park, an unfamiliar place to me.  Reached around 5.20am and managed to grab a parking lot at the nearby multi-storey carpark.  Wow… a lot of race participants had reached there as well, all decked in the familiar neon orange t-shirt. Made my way to the holding area and aimed for the mobile toilet.  This is a must do pre-race routine, if not it would be extremely disruptive having to hunt for a toilet half way into a race…lol.  There were ample toilet facilities but queues were already building up.  After my toilet break, I moved to the start point and started my warm up exercises.

By 6.20am, the crowd had already built up all ready to start.  The DJ had to speak to us in a low voice as we were near a cluster of flats.  I find this amusing as we had to strain our ears to hear what he was trying to tell us.  Around 6.25am, the pacers with their blue balloons started to stream in.  Wah….. they have pacers for 2.30 hrs as well.  I made a mental note to follow them and see if I could break my training time records of 2.35 hrs.

Soon, we were flagged off at 6.30am silently….lol…no horns..no loud music….ha ha…..So we started running ‘silently’.  This was the first time I am running at Punggol Waterway Park.  There were some construction going on next to the park connectors that were running on.  But on a whole, it was a rather easy and flat route the runners.

As I was nearing the 5km mark, I saw the first runner streaking down the opposite side of the park connector, with a cyclist pedaling furiously to lead to the way…wow….(I understand that the winner of the half marathon came in at 68 minutes).  Seeing him, I started to increase my pace, but soon dropped to my usual training pace. I completed the 1st loop of 10.5km at around 1:10hrs, and bump into the 10k runners who were just released from the start point.  So it was rather squeezy from the 11km to the 15km mark, which slowed down my pace considerably.  The 2nd loop also means a boring same route for the next 10.5 km.  Some where around this distance, I passed by the energy gel point and grabbed a packet of GU energy gel (mandarin orange).  I had never tried energy gel before and I was tempted to tear the pack open and glup the contents.  But I decided otherwise, as it meant that I would need to start walking to do that, which would break my momentum. I also started taking the isotonic drinks from the water points from the 11km mark onwards.. The isotonic drinks came in orange (or yellow?) and green and tasted rather saltish and made me thirstier.  I decided to stop taking them after the 1st two cups and relied on my own supplies (100 Plus Edge) and the plain water from the water points.  Luckily I had my trusty Redbull (in my waist belt bottles) and had sipped on them for every 2 km after the 11 km mark as well.  It boosted my energy levels and make the race more enjoyable.

The crowd started to thin out after the 15km mark, and I picked up my pace.  As I was coming on to the final km, I realised the finishing point was at the top of a low hill.  To get there, I had to run up a rather steep slope which snaked around the low hilltop, and had to dodge the walker who were jamming up the route.  As I crossed the finishing point, I glanced at my watch and realized that I had achieved a timing of 2.23 hrs!!  A good 10 mins plus shaved off from my training best timings.  I was very pleased with myself as I made my way to collect the banana, the 2nd half of the medal and the 1.5 litre of mineral water.

Asked a fellow runner to help take the usual ‘victory’ post race photo, then did some warm down before heading home.  It was a good 1st half marathon for myself.  Thumbs up to the organizing committee as well for the smooth race, given the fact the they were volunteers.

The medal is a very unique design in that it had two pieces.  You get the first one during the race pack collection and the other half only after you complete the race.

You can read more details on how I prepared for this race in my blog at runningat39.blogspot.com.