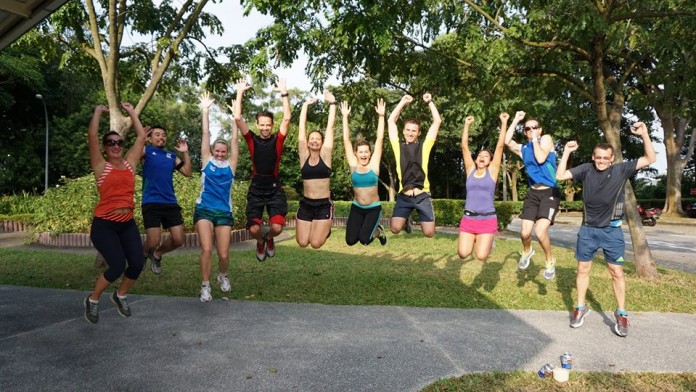 Connecting  Mount Faber Park, Telok Blangah Hill Park and Kent Ridge Park, the Southern Ridges is a 10km stretch of connecting trails, architectual bridges and diverse vegetation.  The Ridges provide panoramic views of the city, the harbour, the Southern Islands and the Strait of Malacca.  For nature lovers and within easy commute, Southern Ridges is a haven open to exploration.

What was sure to be a challenging run, the hills, hills and more hills and all those stairs were unanticipated to some degree.  The relief however, was in knowing that what goes up must come down, and there was plenty of that too.

Easiest starting point is the Marang Trail and it’s not because the trail itself is easy.  It’s easy simply because it starts outside HarbourFront MRT thereby making it easily accessible.  The trail is an upward stairs climb of about 70m for about 800m in length.  The usual under 6 pacers took off like ‘Lightning Jack’ whilst the rest of us heaved ourselves up the stairs one slow step at a time.

Leading into Mount Faber Park through Faber Walk, we are met by city views stretching as far as the eyes can see. Standing at 106m high, Mount Faber is the fourth highest hill in Singapore and known for the cable car attraction and scenic views whilst dining.

We finished on Mount Faber with the Merlion Sculpture at Faber Point.  The Merlion is Singapore’s mascot depicting a creature that is half lion, half fish.  This one is 3m tall and one of five on the island.  The tallest is on Sentosa Island and stands at 37m high.

With one out of three parks completed, we moved onto Telok Blangah Hill Park via the architecturally designed Henderson Waves Bridge.  At 274m long and 36m above ground this pedestrian bridge “has a wave-form made up of seven undulating curved steel ribs that alternately rise over and under its deck. The curved ribs form alcoves that function as shelters with seats within.” [Wikipedia]

Worth taking the time to enjoy the surroundings, the view and the structure of the bridge, a return visit is on the cards with a better camera and more time on my hands. As the bridge leads us into Telok Blangah Hill Park, we come upon the Forest of the Giants, where giant native trees tower over the canopy of the secondary forest.  Primarily planted to teach people about reforestation there are now 600 plus trees  that can reach up to 80m when they mature.

The nearby restroom and water fountain was an excellent area to refresh before pushing onto the Forest Walk, a raised zig-zag steel walkway that treks through the forest for 1.3km.  The walkway was a welcomed reprieve as we jogged downhill towards the next connecting bridge. The final bridge connection was the Alexandra Arch at 80m long featuring “a curved deck and tilted arch like an opened leaf” [Wikipedia].  Another pitstop for the mandatory group shot and much needed rest to  catch our breath before tackling the last trail to our end point. Skipping HortPark we scrambled our way up to the Canopy Walk and made our way to Kent Ridge Park. During WWII the park was once the site of one of the last and fiercest battles fought by the Malay Regiment against the invading Japanese army.  It became known as the Battle of Bukit Chandu. With a final push uphill we arrived to our destination some 45 minutes later, sweating, thirsty and relieved to be able to sit down.   We covered about 6km in total.  That was definitely sufficient on this hilltop.

The highlight at the end was the portable cooler laden with anything you want: beer, isotonic drinks, spirits and even cocktail mixes.  If there was any water in there I paid it no heed, nor did anyone else.

With drink in hand and good company we closed off our evening with a sunset.  Can it get better than this?