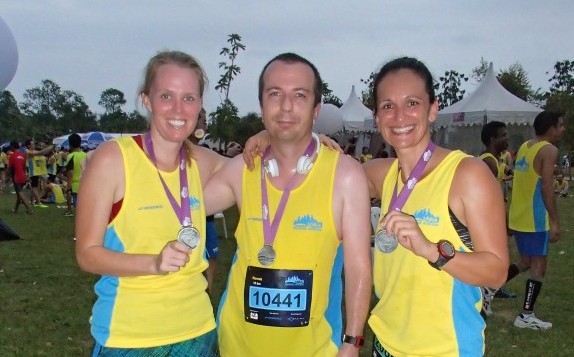 Being a loaded racing weekend for me, I was grateful both events were in the afternoon.  The Marina Run was my first 10km for the year and third since I started running mid-2014.  The Party Dash was a 5km fun run and I had hoped for a very easy one since my 6 years old daughter was racing with us.

Here’s a glimpse into the races.

“Roses are red, Violets are blue, I know it’s Valentine’s Day….” and that’s about as far as it goes because sweating it in a 10km run with my buddy Michelle ain’t romantic at all but that’s exactly what we did, along with the other 6000 competitors who joined the race.

Sluggish, lazy, sore quads from previous training sessions, certainly not in the mood, neither of us knew how this run was going to unfold.  All I thought of was that I will run, walk or crawl to clock up 10km and complete the race.

Flagging off from Gardens by the Bay East beneath the south side of the Benjamin Sheares Bridge, we headed for the Marina Barrage Bridge.  Within 30 seconds of crossing the Start line, I lost Michelle in the crowds.  See you at the end buddy.

As I crossed the bridge, I caught a glimpse of my support team, waving and photographing from level 2 of the Barrage’s Pump House. I will see you guys at the end too. The rest of the race was a slow and steady pace along the shoreline of the Marina Bay and Kallang Basin.  With my Suunto watch directing my pace, my aim was to complete the race by running (or more like jogging) the entire route. Keeping my cardiovascular exertion in check by slowing down, my focus was mainly on my legs and the usual fatigue and discomfort I feel after several kilometers of running.  I was satisfied when I reached the 5km mark, still feeling in pretty good shape. By the 6th km, my knees and quads were subtly niggling and it was time to talk to my head and pump up the music.  Swaying between “just one more kilometre to where is the next km marking to don’t stop to carry on” type of conversation, I was relieved to see the 9km marking.  As I rounded the Costa Rhu condos and saw the Benjamin Sheares Bridge, I kept wondering why I couldn’t see the Finish line until I realised that the last kilometre was an extra 500m longer.  The run in the end was 10.5km and boy that last 500m was definitely not welcomed. However, I was satisfied with the overall effort.  Slightly better than my Great Eastern Women’s run in November 2014, I ranked 346 of 1945.  Michelle on the other hand did exceptionally well by ranking 68 of 1945, making it to the top 3% of racers. Whilst the Marina Run left me fatigued, I was ever so thankful that this race was untimed and organised purely in the name of fun.  Being in the same location as the Marina Run the 5km was a 2 x 2.5km loop in front of the Marina Bay Golf Course.

Since it was untimed most of the participants only completed one loop which was more than enough to maintain the fun factor and motivation for my child.  We were joined by our friend and his family.

The highlight of this race was the water pistol each participant received in their race pack instead of a tee.  Loaded with water and ready to rumble, Wonder Girl (aka Trinity) had her eyes set on her target, Deathdeala (aka Daddy) and her friend, Michelle.  Along the way Wonder Girl realised that Triple SSS (aka Mum) may have looked harmless as she was photographing but was quite efficient shooting with her left hand. Deathdeala was in full swing, guns blazing, mowing down anyone in the way with water.  Somehow I think he lost himself in one of his Call of Duty games. Taking ‘incognito’ positions behind trees that were thinner than him, Deathdeala was hoping to spring upon the unsuspecting oncoming gunslingers.  If only he wasn’t so invisibly visible. What he didn’t expect is Triple SSS sneaking up on him and dousing him in water.  Down for the count, Triple SSS then descends upon Wonder Girl smothers her with mummy kisses and proceeds to blast her with water.  Mission accomplished and I was out of there. Never one to accept defeat, Deathdeala rose from the ashes and duplicated himself with Deathdeala II.  The war was raging all the way to the finish line where they took their final victims down who were attempting to cross the line. Somewhere along the way we did do some running but not much.  We clocked up 2.8km in about 25min but didn’t care much for that as we headed for the carnival festivities.

Being a very small event, perhaps 300-500 participants, it eliminated the usual post race mayhem at the finisher tent where we collected fresh sandwiches, fruits and sports drinks.  The kids entered the highly entertaining Musical Statues game on stage. Comical game hosts kept us in stitches for the next half hour.  Michelle earned the nickname Madame Tussaud for her perfectly frozen stance, and Trinity was nicknamed after Michael Jackson’s ‘Thriller’ song. The kids were so good at the game the rules had to change with a final dance off.  Trini completely let loose and came out one of two winners. Besides this game, the carnival consisted of Family Olympic Challenge, more stage games, activities at the booths and music performances from local bands.  Another family orientated event just like the Safari Zoo Family Run that comes highly recommended.  We certainly had tonnes of fun being water gunslingers with our swanky bib code-names.