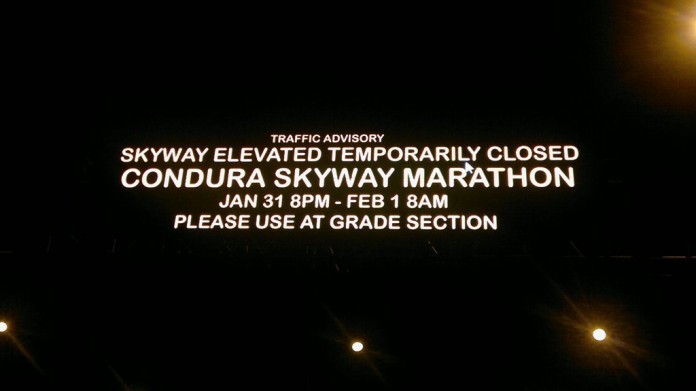 It isn’t unusual to hear someone in Singapore asking: “Which race are you going this weekend?” I had the privilege of answering that exact same question very differently when a colleague of mine asked. “Condura Skyway Marathon!” I answered. “Huh?” he retorted. The popularity of joining an overseas race is fast catching up with many Singaporeans (if budget permits) and how it can be integrated into a new term we runners like to call “Runcation”. Running at Marina Bay vicinity 12 times a year can be very uninspiring. I am one of those who feel that participating a race in a foreign country will bring me new insights on how races can be better organized and how the body experiences an entirely different climate adaptation.

Exploring my yearly overseas race options since Oct 2014, The Condura Skyway Marathon definitely caught my attention for several reasons. Firstly, we are running for Help Educate and Rear Orphans (HERO) Foundation. Meaningful as it may be, I was more intrigued by their secondary mission for this run; the military-styled camouflaged ribbon on the finisher medal serve as a reminder to me that the organizers are providing support to the families of Filipino soldiers killed or injured in action. Arriving on 30th Jan morning in Manila, I was one day ahead of the race so I should be able to get plenty of rest.

I went to collect my racekit at the hotel lobby and at the same time, had a look at the setup of the Condura Race Village.

There were 2 well-known hotels within walking distances to the start point of the race, so no extra cost for transport was required. The racekit consisted of a technical shirt (better known to Singaporeans as a race tee shirt), a race bib, D tag timing band and an Asics discount voucher).

I was truly very excited about this race over other races for this year because it was a night race (start time – 12 midnight). I have always enjoyed running at night and to make the race even more attractive, we would be running on the well-lit, long and never ending expressway (otherwise known as Metro Manila Skyway System).

And off we go! Kudos to the organizers for maintaining order with the corrals. When you register for this race, you were told to estimate or state your finishing time during the registration process, thereafter, a corral alphabet would be assigned and printed on your race bib. Corrals were dispatched about every 2 mins in alphabetical order.

Racing on expressways or highways always has its advantage because the road is wide enough to accommodate a vast sea of runners. However, because of Philippines’s complex network of highway/road systems, there were a lot of slopes and downhills. It came to a point where I gave up on running up the slopes and made sure I raced the downhills in big strides. Medics were very active with the muscle/anti cramp spraying while the volunteers did more than you could ever ask for at the respective drink stations.

Overall, race course was well worth the running experience. The plus points of this very well organized event were:

2) cups used at drink stations (every 2.5km or so) were shorter and broader at the base so as to avoid cups tipping over while runners tried to grab hold of them.

3) bananas were given out and never insufficient.

4) sponges dipped in buckets of ice water were free for anyone who needed them. I used them to sponge my knees and seemed like it helped.

5) distance markers at every km were clearly marked and accurate.

6) EVERY drink station had at least 6 portaloos and they were differentiated for male and female use.

7) temperature (21 degrees) was perfect for night running at this time of the year.

8) my hotel was very near the start line.

As I tried to embrace the sights, sounds, beauty and satisfaction of crossing the finish line, the Condura Race Village was already filled with so much joy, smiles, congratulations and happy finishers. The most memorable moment was when I was presented my finisher medal – it was worn around my neck personally by a Filipino Army soldier, followed by a strong salute to me. How cool was that? It was definitely worth the trip, especially if you enjoy a night race.

15,536 runners (42km being the most popular race category! Seems like many in Philippines are ready to challenge the 42km).

212 international runners (so far, only 2 known Singaporean runners participated, including myself).