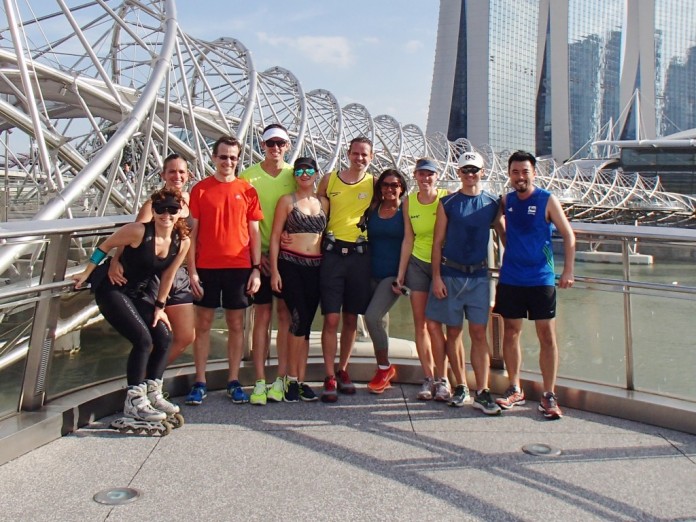 The second run in the Team Costa Series took place on another brilliant sunny day, except this time it was an afternoon affair with an attendance of ten team members.  Taking the lead were the 5+ pacers Chris, Jeff & Stan, with David and Michelle close behind, whilst bringing up the rear were John, Veronika, Avni and myself.  Our rollerblading member, Zuzana, meandered amongst us all. We met at 4.30pm on Saturday, 17 January at Boomarang Bistro, Robertson Quay and mapped out the route. Heading south along the Singapore River, the route took us past Clarke Quay, around the bend at the Asian Civilisation Museum and onto the Helix Bridge via the Float @ Marina, where we stopped for a breather, water top up and a group photo. The Helix Bridge is an architectural feat.  Opened to the public in 2010, it was designed by an Australian and Singaporean consortium.  At 280m in length the bridge is a representation of the left-handed DNA strand.  When you walk on the bridge look out for the  paired letters c and g, as well as a and t which stand for cytosine, guanine, adenine and thymine, the four bases of DNA.

Heading down the stairs towards the waterfront promenade, we were greeted by another architectural feat (and there are many in Singapore), the ArtScience Museum.  Designed in the shape of an open lotus with ten “fingers” as extensions, the museum is anchored by a round base in the middle which acts as a funnel for channeling and harvesting rainwater used for recycling.  Each one of the fingers are gallery spaces in which I have whiled away many wonderful hours with exhibitions the likes of: Genghis Khan, Dinosaurs: Dawn to Extinction, Leonardo Da Vinci, Titanic, Mummy: Secrets of the Tomb and Lego: Art of the Brick. As we were about to tackle the promenade our delightful Veronika figured that running inside The Shoppes mall in air-conditioning was a much better idea and an opportunity to cool off for a couple of minutes.  You didn’t have to ask me twice; I followed suit. The 3.5km waterfront promenade is a visual feast of glass encased skyscrapers such as the Marina Bay Financial Centre cluster and The Sail residences, the 87 years old neo-classical Fullerton Hotel, the 70 tonnes / 8.6m tall Singaporean mascot the Merlion and the durian inspired Esplanade Theatres.

We had another welcomed pitstop near the Fullerton Bay before we completed the final leg of the run.  At this point, I declared to John (my hubby) that teetotalling for January was off and I’m having a Corona at the end.  On that note we rounded the corner under the Esplanade Bridge and pressed on across Anderson Bridge, then Cavenagh Bridge through Boat Quay and the final trek back to Boomarang. Buckets of Corona and Asahi were immediately ordered, followed by some much needed protein.  It’s been a long time since we’ve had kangaroo steak.  A little fickle to cook due to its low fat content, a mere 2%, the steak was a perfect medium-rare with low-glycemic sweet potato mash.  Another round of beer buckets to really quench the thirst, some more banter and finally the way home. We satisfactorily completed 8km in about an hour.  With competing schedules and different fitness levels we often train either on our own or in very small groups.  This session wasn’t about timing but an opportunity to run together, inspire one another and have some fun. As February is nearly upon us, several Team Costa members are registered for various races such as: Terry Fox, Safari Zoo, Brooks Marina and Marina Party Dash runs and the Metasprint Duathlon.  Somewhere along the way we’ll also tackle the Southern Ridges as our third fun run in the series. Here’s hoping to having enough time to write about all of these.