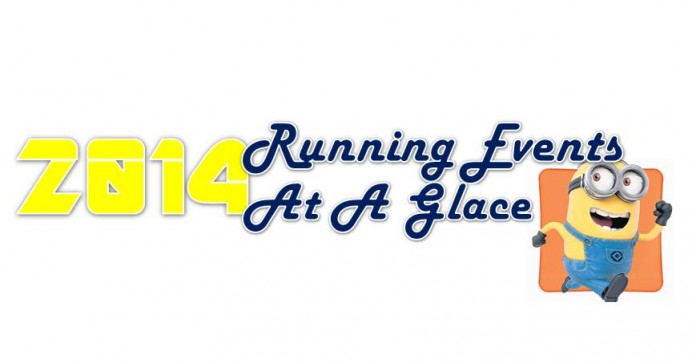 Year end is the time where we reflect about the whole year, and at the same time set new goals for the brand new year ahead. As 2014 comes to a close, let’s take a look at the various running events that happened in Singapore in 2014.

2014 Running Events At a Glance

As usual, many running events took place in the garden city over the past year. But 2014 saw an increase in the number of theme runs happening here- Foam Run, Hello Kitty Run, Garfield Run, Illumi Run, Colour Run, Wet n’ Wild Run and a lot more. These theme runs usually ranges from 5km to 10km, and are meant to inject the fun factor into running. For example, the Illumi Run had various sections that “splash” participants with liquids that can glow in the dark, while the Foam Run incorporated foam and slides into the run itself, allowing participants to enjoy the whole process and redefine what it is to run.

Apart from these theme runs, there had been several charity runs organised as well, such as the Yellow Ribbon Run that had been happening for several years to encourage organisations and individuals to give ex-convicts a second chance, Singtel Race Against Cancer etc. For the first time, SIA also organised the Singapore Airlines Charity Run. Held in-conjunction with SG50, the run helps to raise funds for Community Chest. I would categorise this charity run as a theme run as well, as the whole running experience feels that you are indeed taking a plane- from how the race bibs are designed to the whole set-up of the race route.

2014 also saw in increase in the night races– apart from the Sundown Marathon, the Jurong Lake Run is held in the evening as well, with the theme “Light Up the Night”. Puma also organised the first night race in Singapore, which was held at Sentosa, giving runners a different running route from the usual city area.

Did a couple of races this year- Sundown Marathon 42km, Army Half Marthon 21km, NTU X-Campus and Standard Chartered Marathon Singapore 42km. On the whole I feel that my timings can be further improved. Shall work towards the goal of achieving better run timings next year!

Several races had already been announced for 2015, one of the notable thing is how Sundown Marathon is shifted to July instead of the usual late May/early June (this indeed shocked a lot of runners). Apart from that, as Singapore celebrates her 50th year of independence, we can expect some runs to go in-line with this theme, probably the Army Half Marathon, Singapore Airlines Charity Run, Pocari Sweat Run just to name a few. We shall wait as the organisers slowly reveal the details in time to come.