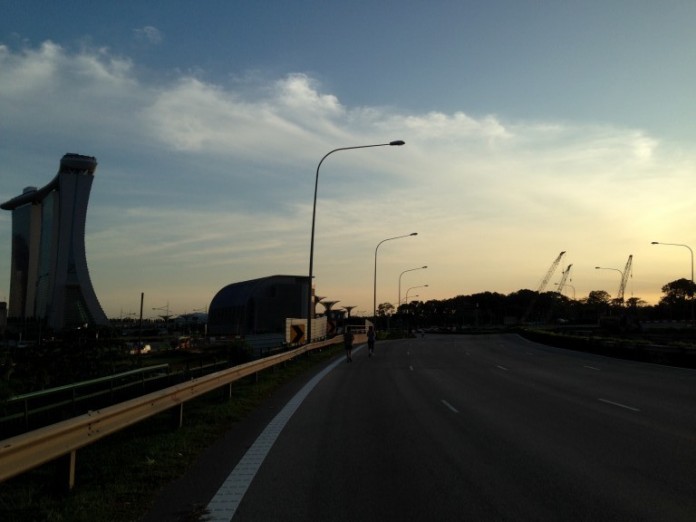 1 year ago, the new Marina Coastal Expressway (MCE) took over East Coast Parkway (ECP) on the work of routing the traffic around the downtown area. There was a small stretch of time when there are absolutely no vehicles on the decommissioned expressway and there were no barricade barring the public from entering the disused expressway. I decided to post this run 1 year after the closure of ECP to prevent the word from getting out and attracting hordes of runners to do a farewell run on ECP. There are all those heavy vehicles and construction materials lying around which could pose as a risk for irresponsible and careless runners.

“Hey guys. You know last week during our Tanjong Pagar Run? I found a way into the closed down portion of East Coast Park Expressway!”

“No Way! Aren’t you scared of the Police?”

“Well, it is a public road and there is no signs asking people not to trespass.”

“Hmmm, it will pretty cool to have a farewell run on the ECP. Let’s do it!”

My crazy proposal to run in the middle of the disused part of the East Coast Park Expressway was actually adopted by the group! News of it spread and we managed to attract a few more curious runners to try out this one in a lifetime experience!

After gathering at Tanjong Pagar Mrt once again, we set off along Tanjong Pagar Road to find the now disused ramp into the expressway.

We did not see any barriers, any “Do Not Enter” signs or tapes, so we assumed that it should be legitimate to have a stroll/run in the middle of an expressway. We were probably the first people to run in the middle of ECP ever since 1982 and there would never be such a chance again. Lining up, we took a wefie and off we went, sprinting down the wide 5 lane expressway!

The decommissioned stretch of ECP is pretty short and we only had a joy run for around 800meters before we hit the end of the road (literally!). We continued our run to MBS and was pleasantly surprised to witness a passing out parade by our national service men who survived the 3 months basic military training course (BMTC). The guys were sighing on the subsequent 12 years of national service commitment waiting for them and we were reminiscing on our own passing out parades. The weather is absolutely beautiful (and hot!) and we spent more time taking pictures that day than trying to accumulate some mileage to our run.

Thank you ECP for serving Singapore all these years!

It was a great run!