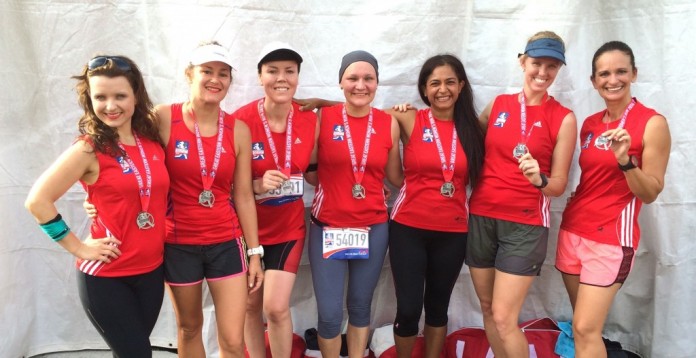 At the break of dawn

15,000 women woke up Sunday morning (9 Nov) to participate in the one and only all women’s running race, the Great Eastern Women’s Run.  Certainly the 5am precipitation did not hinder the keen runners, joggers or walkers.

By 6.30am the sparkling view of Singapore’s many iconic buildings across the bay elicited several ooohs and ahhhs, whilst the Singapore Flyer stood majestically above the start line waiting for the break of dawn.

Let the spirit take you high

Let your feet pound the K’s

And when it’s sweated and all done

Let the champas flow freely by

And celebrate a race well done As participants jostled for their Start position, fitness trainers broke out into aerobic warm up sessions to pumping music, the compere was hyping up the crowd and the minutes to flag-off were slowly ticking by.  There on the sidelines stood the support system: daddies huddling under brollies with their kids, husbands/boyfriends spectating their loved ones.  More ooohs and ahhhs were to be had and appreciated.

In the midst of all this seven women left their sleeping loved ones behind to band together to tackle the GEWR race.  Several firsts were being experienced in this small group: a first race, a first best time, first 10km / 5km run, first participation in GEWR.  Some were cajoled into it, some were keen, some registered in the nick of time and some just snuck it in.  No matter the reasons, these band of women donned their gear, strapped on their sneakers and hit the pavement of the F1 Pit.

These women are my friends and neighbours with diverse levels of running skills.  Some are old timers on the running track and some are very new to it.  Three of us tackled the 10km race and the other four entered the 5km race.  Undeterred by the remaining drizzle, we started the race with a smile on our faces and a “see you at the end”.

I started off at a very comfortable pace enjoying the scenery from another angle.  Chelle was well ahead of me already and I was slowly losing sight of her bright fluoro top amongst the sea of red singlets. It wasn’t long before I ambled into Nicoll Hwy for what seemed like the longest stretch of the run due to its lengthy and straight course.  Whilst I was heading west of Nicoll, Chelle had already turned and started heading east, So I spotted her on the opposite side of the temporary fence.  We did a swift high-five or more like a low-five to acknowledge one another and then continued on. The last time I would see Chelle would be at the opposite end of Nicoll when I was heading east and she had already turned at the 5km mark to head west and complete the second half of her run.

It was at this point that my pace started slipping and I started struggling with the run.  Found myself walking a lot more and running less.  The uphill ramp didn’t help and by the time we turned the corner for the downward ramp, I was spent and just kept walking.  I remember during my 8km NorthPassion race that I ran into trouble around the 5-6km mark as well.  Even my hubby’s words ringing in my head to “keep going soldier” stopped working.  By 8km I was barely running a few hundred metres at a time.

I was knocked out of my sullen trance by a tap on my rear when lo and behold my 5km buddy, Vika, with a massive smile on her face, waves at me. I mouth a desperate “I am dying here”, she concurs and then just sprints off for the last 2km.  I don’t think we were feeling the same pain.

Tired of being overtaken far too many times, I hydrate at the 8.5km mark and muster all that I had in my reserves to deliver the last 1500m.  Running alongside the Kallang Basin, I lightened up (must have something to do with running alongside water) and entered a more positive trance and once I turned the corner at the Flyer and saw the Finish Line in the distance, I got mad just enough to sprint my way to the end.

Whilst my time wasn’t spectacular at 1:12hrs, I was satisfied to make it into the top 20%.  As we waited in the Village for the remaining racers, we collected our bags, hydrated and met up with our very own support system: hubbies and kids.

Now that the results are out this band of women were pleasantly surprised with their individual outcomes.  Chelle had her personal best at 55.56 and ranked in top 3% for 10km, Vika slotted herself in at the top 0.5% for 5km and Suuzieq participated in her very first running event and came in the top 5%.  The rest of the ladies were in the top 5.5%.  All round I think this was a fantastic group effort.

I ran and faltered and struggled and walked,
I ran and I hung in there, whether I liked it or not.
Mile after mile my legs were begging to stop,
But my spirit said no and I pressed on and on.
And then, I saw the end and harnessed my reserves,
I crossed the finish line and thought “Thank Heavens it’s done”. See you at Standard Chartered Marathon Singapore, if not before.  I’ll be participating in my second 10km race there.  Cheers.

Disclaimer: JustRunLah! members can maintain personal blogs and post articles such as the present. All messages, articles, and any opinions, advice, statements or other information contained in these posts or transmitted via JustRunLah! channels are the responsibility of the respective authors and not of JustRunLah!, unless JustRunLah! is specifically identified as the author of the message. The fact that a particular message or article is posted on or transmitted using this web site does not mean that JustRunLah! has endorsed that message in any way or verified the accuracy, completeness or usefulness of it. For enquiries please click here to contact us.
Our database has
7122
listed events.
Get tickets