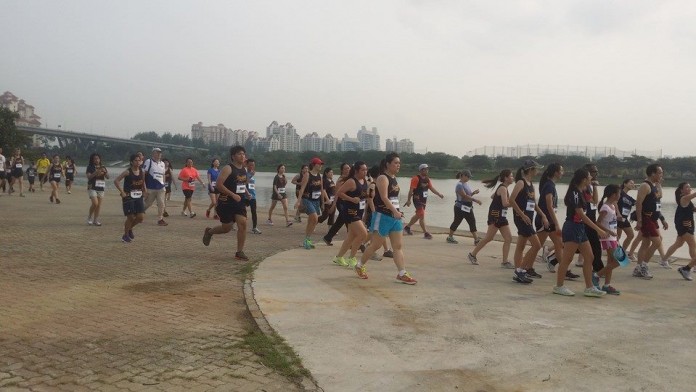 When most of us think of Singapore Airlines (SIA), we usually think of it being one of the safest airlines in the world, providing one of the best in-flight services that anyone would have ever experienced and last but not least, the iconic SIA girl- the gorgeous air stewardesses.  Yet, who says that SIA can only forge a relationship to anything and everything that has got to do with flights, airplanes and the tourism indiustry? Just yesterday, on the 2nd of November 2014, SIA took its 1st step into the sports industry by organizing a race- SIA Charity Run. Held at the F1 Pit Building, the race attracted one of the largest crowd of participants that I have ever witnessed, ranging from kids to corporate participants to competitive runners.

If you are a fan of themed races like the Hello Kitty Run or Colour Run, SIA Charity Run is the run for you. It is definitely one of the most well-themed races I have ever come across! With its starting point being named as “Take Off” and its finishing point being named as “Arrival”, it enhanced your running experience by allowing you to imagine that you are “flying” instead of running. Not to forget, there were even air stewardesses to cheer for you at the starting point. In addition, to mimic the breathtaking scenery that one would witness on the plane if you are lucky enough to get yourself a window seat, SIA Charity Run provided us with picturesque scenery of the Kallang River, Marina Bay Sands and also, The Singapore Flyer.

Reputable for providing a smooth flight, SIA has planned a fairly smooth running route for the race too. With little slopes, the run was a pretty easy one that would not be too taxing for any beginners out there. Unfortunately, there were several areas (the Kallang River area) that were pretty narrow and congested. For competitive runners, this can be quite a hassle as your timing for the race will be affected. In fact, due to the non- competitive nature of 5km run, many of the participants were walking. This resulted in a huge congestion around those areas and many of the runners had to either run on the grass patches to keep up with their timings or, to walk together with the other participants. Besides, there were also a lack of road marshals at several important points that resulted in several race participants cheating their ways across the race by cutting across the race route. Yet, all these congestion and problems were eased with not only the strategic location of the water stations along the wider areas of the race route, but also, the integrity of the majority of the race participants.

Due to its abundance of volunteers, there were almost zero queue for both baggage deposit and medal collection.  In fact, unlike many of the races in which you have to endure a long queue before getting into the restroom, there were plenty of restrooms for this run.

Having a themed photobooth is a trend nowadays and SIA did not miss out on that! After the race, one can grab a picture taken with not only a pilot and an air stewardess, but also, with a cute airplane background. Not to forget, Ironman and Captain America were spotted there too!

Overall, SIA Charity Run is one that is not only family-oriented, but also, well-themed. It is a run that you will witness parents piggyback-ing their kids, guys dressing up as air stewardesses, kids dashing along the race routes, all in one day. As a competitive runner, I would join this run again though most likely, for the 10km category instead.