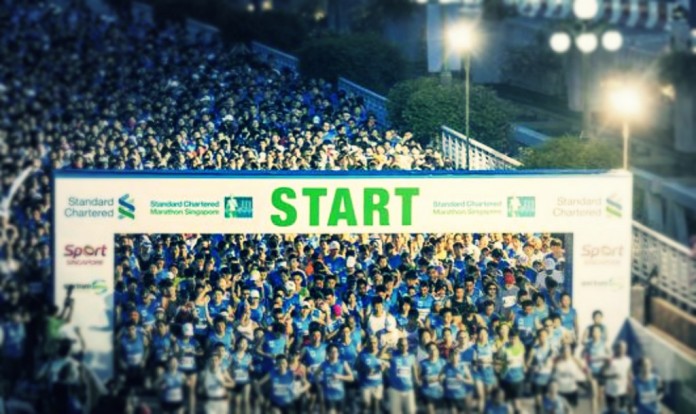 …to Standard Chartered Marathon Singapore 2014 (SCMS) and the organisers have just released the running route for this year’s edition of the run to be held on 7 December 2014. It is said to provide a better and smoother running experience for runners as they have significantly reduced the congestion issue by shifting the merge point from the previous 3km mark to the last 500m instead. The starting points remains pretty much the same as last year, with the full marathon starting at Orchard Road, half marathon at Sentosa and the 10km run at Esplanade Drive. This year’s theme, 1 RUN IN MIND, aims to reach out to different parts of Singapore. It encourages runners to represent their respective community (Central, East, West, North-East, North) to participate in the run. Posts on various social media platforms such as Facebook and Twitter encourage runners to tag their running community during their training runs too. (eg #scmswest). Apart from the usual running clinics and run with pacers before the race, “Run in the Hub” is also held for the first time. It is a weekly run held in various parts of the island to encourage runners from the particular community to come together on a Wednesday evening each month to run together. On top of that, Ekiden teams this year are also required to raise $500 for a charity organisation.

This year’s registration model is also quite different from the other races that we usually see. Instead of the “Early Bird, Normal, Late Registration” model, the organisers are using the number of slots filled up to determine the price that the runner have to pay should they wish to register for the run (categorised as Priority+, Priority and Normal). 2013’s runners holding Standard Chartered Bank cards are allowed to register first, followed by 2013’s runners or card holders, followed by the public. This means that the public still stand a chance to register for the run at a lower rate should they register earlier. Till date, the half marathon slots have all been taken up, while the 10km run and Kids Dash selling fast.  Apart from that, due to some technical difficulties that resulted in some runners’ timings not being recorded last year, the organisers provided a $20 off for the affected runners’ registration this year.

SCMS 2013 was my first full marathon in my entire life. The whole running experience was generally good.

Starting the run at Orchard Road did provide an alternative to the usual starting point at the city area, following which is the usual East Coast Park to clock in the full distance. The weather last year was cloudy and cooling, so heat was not a big issue. Compared to Sundown Marathon 2014 that I took part in earlier this year, I would say that SCMS did a better job in providing welfare for the runners.

Muscle rubs are easily available from most of the volunteers. Bananas and gel were also still available for the slower runners. However, one point that I felt requires improvement was the collection of baggage after the run. The baggage collection area, located at the Seating Gallery, was rather far from the finishing point. I could see many runners having difficulties walking over and complaining along the way due to cramps or abrasion. Hopefully this issue can be resolved this year.

If you have yet to sign up for the race, registration closes on 31 October 2014. Late registration will start then. (Additional $20 on top of the normal rate)

To the runners doing SCMS this year, continue to train hard! See you on 7 December 2014! 🙂