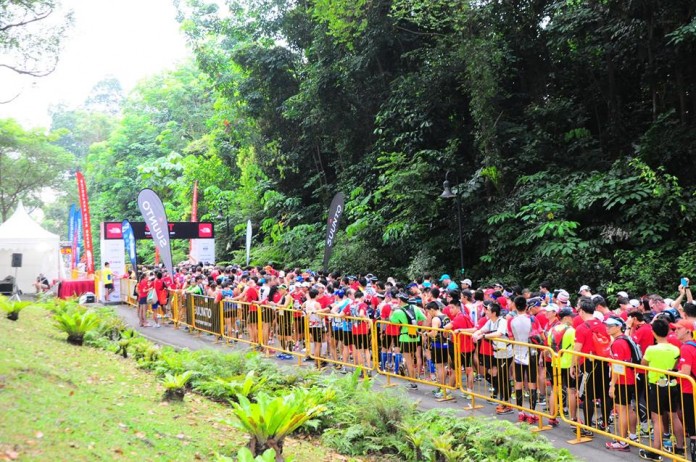 That’s a shortened version of the conversation I had early yesterday morning with Shug. Shug doesn’t understand ‘not racing’, and even if he tried to ‘not race’ he’d end up racing after about a kilometre.

Which is pretty much how it played out.

And so the weekend began. Unusual to be doing a race on a Saturday, and an unusually late 0800 flag off for The North Race 100 Singapore 25k.

I’ve been looking forward to this one for a while, most of my regular long run routes – stuck together to make a 25k trail race – and part of a global series of events in other exotic locations around the world.

I set off with Shug and Neil (the usual Mount Sinai Striders trail gang). Shug is obviously going to race it – he can’t help himself. Neil arrived back from Hong Kong late friday having been in the UK until 48 hours before that, so he’s jaded and exhausted. Me, I went out Friday night and shared a few bottles of wine with some friends, so I’m not perfectly prepared, but not anything unusual.

Great logistics at Mcritchie from North Face’s events team – bag dropped and ready to go shortly before 0730. Then we had our packs weighed to check we had the 1.5L minimum liquid required and we’re into the starting pen, wave 1. we work our way through to about 10m from the front and wait for the go.

We’re off, Shugh and I work our way through the usual 50-100 people who have lined up at the front but realy shouldnt as we pass the rowing club, but the time we hit the northern trail section of MR we are nicely spaced.

He’s already gone off ahead after about 3k, I keep steady, around 5.20 pace but try to take it very steady on any of the uphill sections, knowing there was a long way to go and a lot of climbing ahead.

Got to Rifle Range Road feeling good, working with two other runners taking turns to lead the group of three. Here I spotted by first 100km runner heading back down the road – massive respect for these guys, it’s 0900 and they are already 5 hours in, with at least that long to go!

Trying to ignore these things I continue, past halfway as we head onto the Green Corridor. Here I see fellow F1 runner Chee, who is doing the 50k and looking good. Also here’s where my game of ‘catch me catch you’ starts with a fellow 25k runner – we pass eachother back and forth pretty much from here right to the finishline – each time getting more friendly.

At this point I have a loose plan to continue very steady until 16-17k, then try to pick it up for the last 8-10k, but the rolling hills of Belukar Trail sap my energy and enthusiasm and I never really pick it up. In fact at this point I start ‘walk up/run down’ for any of the steeper hills, which worked very well (if you ignore the effect it had on my race time!). Again the ‘RR/MR Connector’ section is tough, but I’m delighted to see the Jelong Tower back in Macritchie and I know we’re into the last few K’s.

Round the golf course, past the fitness station and we’re into the ‘back’ section of the MR25 5k time trial route, so less than 3k to go.

At this point I’m running with my ‘pass me pass you’ buddy and we approach a young guy walking, I tap him on the shoulder as we run past and say ‘come on, run in with us’, he picks up and we run in as a three, until my ‘pass me’ buddy decides he needs another short walking rest. So me and my new young buddy run in, he’s french, new to Singapore and on his first race here – we head out of the trail section and into the last 400m, he looks at me and says ‘do you want to sprint?’, and I think, yeah, why not – so we both go at it ,eyeballs out for 400m to the line, which feels great after all those hills. We congratulate each other and then I see Shug, who’s been waiting for me for aout 20 minutes, he tells me Neil DNF’d about 10k in – which is the only bad thing about the whole morning.

My Garmin said 27k, a great run, a perfect hard workout as I start the countdown to SCMS Marathon in December.

I pick up my medal and wander over to the refreshment tent, expecting the usual 100plus and a banana – but WOW, these guys have loads of stuff. Sandwiches, Fruit, Drinks and ICE LOLLIES !!!! Man alive, nothing has ever tasted better in my life than that Ice Lolly and the 3 cans of Aquarius that I washed it down with.

Picked up my bag, had a quick shower at the amenity centre and that was that.

I loved this race, it was well organised, the weather was kind, the route was tough but manageable, the volunteers were great, the directions were clear and the after run service was perfect.

But beyond that I am just really loving these trail runs – somehow the runners are a lot more sociable and supportive – the longer and harder the event, the more relaxed everyone gets – I had at least 5-10 nice short chats with different runners, and it felt great when my young french buddy thanked me for getting him moving on the last 2k – the whole event left me with a warm feeling.

That apart I have two massive blisters on my heels, and two toes on each foot are very sore. No pain, no gain right?