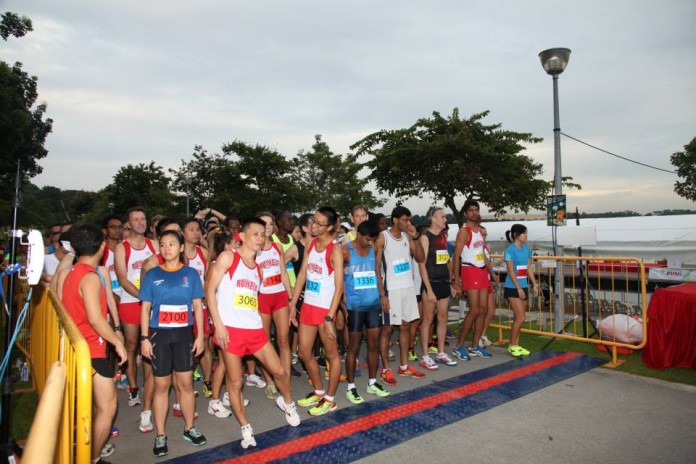 Another early alarm call, for another Sunday Race. This time I’m off to Bedok, for the Tampines Run 10k.

I live west and work in the CBD, so I don’t often run in the East, but I know of Bedok Reservoir from taking my daughter to a birthday party at the climbing/zip wire place there – based on what I saw that time, I was pretty sure it would be a good place to race. It reminds me a lot of a lake run I used to do back in the UK, similar sized piece of water.

Generally I like running alongside water and this course didn’t disappoint. I think maybe the organisers could highlight somewhere on the race website that the first few km’s is on a dirt track, but otherwise I have no complaints about the organisation or pre race arrangements.

So after a quick trek down the PIE (through some light rain) I arrived at Bedok around 0630. I met up with the F1 Runners team for the usual warm up routine and a quick catch up on Army Half Marathon stories with a few people that I didn’t see after the race last weekend.

Another big turn out of F1 runners, must have been about 40 in all.

Met Ben and discussed a basic strategy in the starting pen, which went something like this:

Ben : What time are you aiming for?

Then we spotted Tony, who is usually ultra steady with his pace and normally runs around 38-39 mins. So, tag along behind him, then hold on as best we can.

I went through 5k in around 19:30, mostly a result of the first two quick clicks.

From this point onwards I was just trying my best to dig in and not loose too much time. As each kilometre passed I was slowing, but not blowing up, so I pushed on. Into the last kilometre with 36 mins and a few seconds on the clock, means I have to run a sub 4 min kilometre to hit my target time. Despite a sprint finish, I didn’t quite make it, finishing in 40mins 16 seconds. Lesson Learnt – Don’t rely too heavily on one pacing guide. In this case, my pacing guide was Tony, and Tony decided to race faster than I thought he would. Normally I would have my GPS watch so I could have checked the pace a little earlier, but it ran out of batteries this morning, hence I only had a normal stopwatch and didnt check my pace until 2k, when it was a bit too late.

So I moved through the finish areas a bit deflated and annoyed with myself, BUT then someone reminded me that there were cash prizes for the Top Ten in each category and I remember this race has a Veteran Cat. Quick walk over to the organiser and I find out I’m 8th Male Veteran. Yay $50 for me.

Waited around for the awards ceremony, there were three kenyans in the race ( I guess they were still here after AHM last weekend). The winner ran 31mins – so we were in the presence of some real quality out there.

I collected my $50, bought some chocolate milk from FairPrice (recovery drink of champions) and headed home.

Overall this was a hit for me – similar vibe and level as the Mizuno Passion Run – I am enjoying these races that are organised by the local CSC’s. Enthusiastic volunteers, nice venues, good prizes and competitive fields.

This is the end of a busy racing period, Orange Ribbon, NUS 10k, AHM, Tampines 10k in successive weekends –

If I’m honest I am a bit ‘raced out’ and I need a break (from racing, not running). I am also looking forwards to not having to spend some of my precious family weekend time collecting race packs, which I have also done every weekend for the last month 🙂

My next outing will be the ST Run 21k, looking forward to my lap of the track finish at the national stadium.